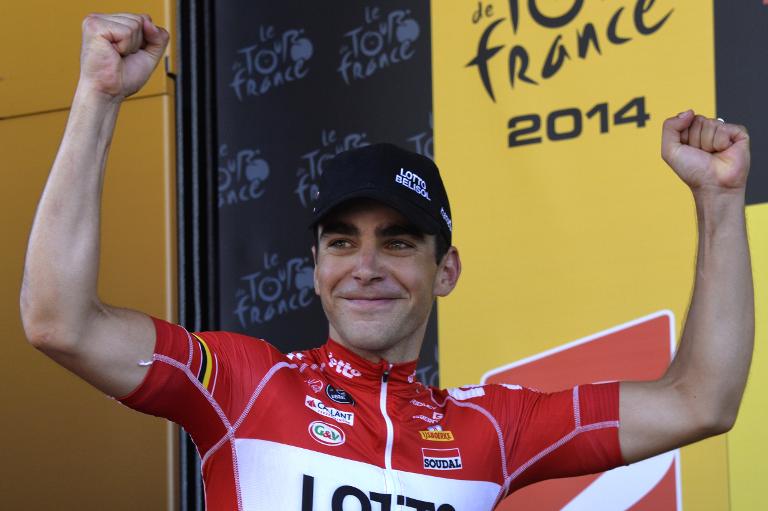 The 101st edition of the Tour de France is turning into a memorable one for the host nation.

Gallopin also wore the coveted leader’s yellow jersey on Bastille Day on Monday after his strong finish the day before stripped Italian Vincenzo Nibali of the jersey for only the second day during this Tour.

What’s more, there remain four Frenchmen in the top eight and three of those are aged 26 and under, meaning they probably have their best years ahead of them.

French newspaper L’Equipe on Wednesday suggested Bardet, sixth-placed Thibaut Pinot, 24, and eighth-placed Jean-Christophe Peraud, 34, that this could be their best ever chance to win the Tour.

But Bardet said it’s too early for him.

“It’s my second Tour, I’ll take it as it goes. Maybe in the next few years there’s no reason I can’t finish on the podium but this year it could be a bit difficult,” he said.

But with Gallopin, who is fifth overall but does not have the climbing ability to stay in the top 10 once the race hits the Alps on Saturday, leading the way in terms of grabbing the headlines, Bardet says French cycling fans can expect a lot from the new breed.

“It’s true that it’s a very good Tour for the new generation of French riders,” he said.

“Tony is a great rider. He went for it and got caught but he went again. Chapeau to him, he could have given up but he tried again so he’s a good example for us.”

Bardet is expecting to wait another week before he can aim at a stage victory in the Pyrenees.

“I hope in the Alps to consolidate my position and maybe, why not, attack in the Pyrenees because there will be a lot of tiredness in the peloton.

“With (AG2R teammate) Jean-Christophe also high up it’s sure that we’ll go on the attack.”

Having worn yellow for a day and now won his first Tour stage, Gallopin was elated.

He said winning a stage was better than taking yellow, while trying to hold onto the leader’s jersey was the worst experience of his life — Monday was a mountainous stage with seven categorised climbs, including four first categories.

“Sunday was one of the best days of my life, on Monday I suffered a lot and yesterday (Tuesday’s rest day) I didn’t feel so good,” he said.

“Today (Wednesday) I thought ‘why not go for it’. I knew the end well and 20km out I had good legs so I went for it.”

For Nibali it was a relief to finally leave the rain and cold behind and enjoy the sunshine.

“It was very tough but the day went well,” he said after Wednesday’s stage.

“I like (the weather), it’s gone from rain to sunshine. It’s also better for the fans and we can expect great support in the mountains.”

However, he warned that the heat can have some drawbacks.

He pointed to Andrew Talansky, the 25-year-old American who came to the Tour with hopes of winning after his triumph at last month’s Criterium du Dauphine, but struggled to get home inside the time limit on Wednesday.

He had woken up with a bad back and rolled in 32 minutes after Gallopin.

“It depends with the heat, it can happen to anyone that they have a crisis, which, if I’m not mistaken, is what happened to Talansky,” said Nibali.