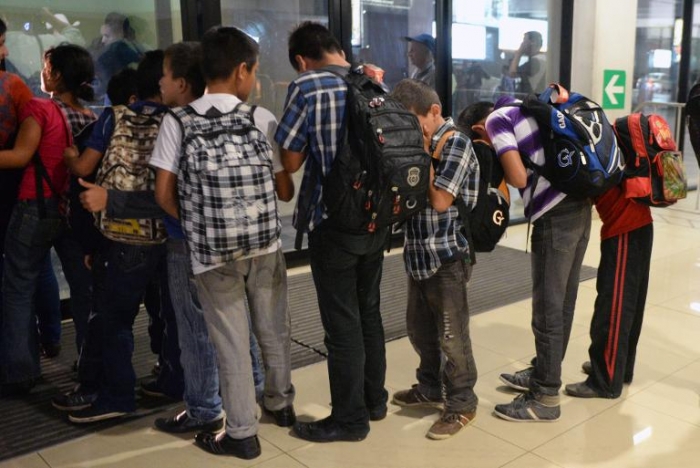 The wave of Central American children making the risky journey to reach the United States is being driven by violence in their home countries and a loophole in US law, analysts say.

The exodus of minors from El Salvador, Guatemala and Honduras has become a humanitarian crisis and overwhelmed the United States’ border patrol, shelters and immigration courts.

These children and teenagers are often brought across the border by human traffickers known as “coyotes” who exploit their parents’ desire to protect them from being caught up in gang violence and give them a better life.

Pope Francis has called the problem a humanitarian emergency and President Barack Obama has asked Congress for $3.7 billion to deal with the crisis.

The children and the traffickers ferrying them take advantage of an exception in the US Trafficking Victims Protection Reauthorization Act of 2008 that grants extra legal protection to unaccompanied children from non-border countries who enter the United States illegally.

The loophole allows coyotes to advertise a trip to the United States with the false promise that their clients will not be deported, said Leonel Dubon, the Guatemalan director of the Childhood Refuge Association.

After being detained without immigration papers, the children are sent to live in shelters or with family members already in the US while the courts determine their status — which can take months or years.

“It’s a case of deceit, because there are no guarantees that these children or teenagers will be granted residential immigration status,” said Carla Salas, a migration specialist at the Human Rights Institute of the Central American University in San Salvador.

This week two congressmen from Texas, which has born the brunt of the crisis, announced a bill to scrap the extra protection given to children from non-border countries.

Republican Senator John Cornyn and Democratic Congressman Henry Cuellar said their proposal would treat undocumented minors from Central America the same as those from Mexico or Canada.

Under the proposal, minors would have the right to apply for asylum within a week of being detained, with expedited court rulings on such applications delivered in less than 72 hours.

For US-bound migrants, the trip through Mexico is fraught with dangers, including robbery, kidnapping, abuse by officials and the predations of drug gangs, which have been linked to migrant massacres.

But for many the violence at home outweighs those risks.

Central America is one of the most violent regions in the world outside of war zones, with annual homicide rates of almost 40 per 100,000 people, according to the United Nations.

That is almost 10 times the rate in the US.

Wars between rival gangs such as the notorious Mara Salvatrucha (MS-13) and Mara 18 (M-18) have made these countries some of the most dangerous places in the world for children, who can be killed for refusing to join a gang.

Officials at the UN High Commission for Refugees have said the increase in undocumented migrants from Central America may be a sign the violence there is getting worse.

Poverty, unemployment and a lack of social services exacerbate the problem.

“I decided to leave for there (the US) because here I don’t get any help from anyone,” said Honduran migrant Angelica Galvez, 31, who made the trip to the US with her six-year-old daughter Abigail.

She was one of 40 women and children deported by the US on Monday from a holding facility in New Mexico to Honduras, a move White House spokesman Josh Earnest said sent a sign to Central American parents that their children would not be welcomed with “open arms.”

The presidents of Guatemala, Honduras and El Salvador have asked to meet with Obama to discuss the crisis.