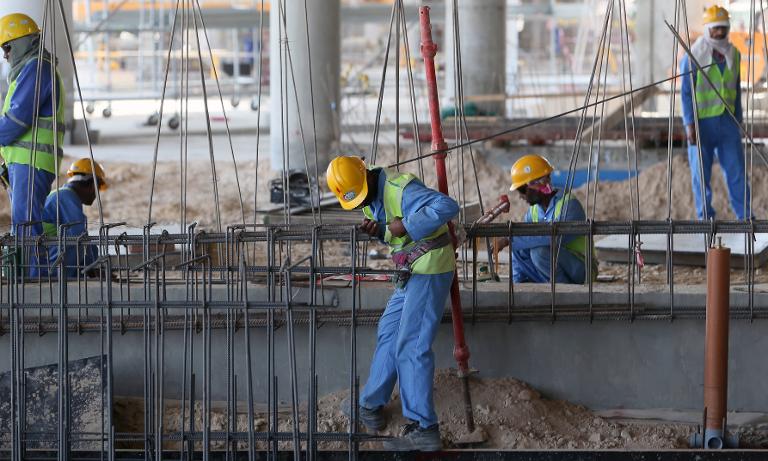 Expelled from housing in a Doha district undergoing modernisation, scores of migrant workers have been left homeless, some of them left to sleep on the streets of energy-rich Qatar’s capital.

The Gulf state has been under international pressure to clamp down on violations of the rights of migrant workers, who are mostly Asians,as Doha embarks on massive projects before it hosts the FIFA World Cup in 2022.

“We were in our rooms when police arrived and gave us one hour to leave with all our belongings,” said construction worker Mohammed Faruq.

“That night we slept on the road.”

Until July 1, Faruq had lived with fellow workers, mostly from Bangladesh, in a two-storey building consisting of eight rooms, each housing five to six people.

They were told to never set foot inside the building again. But Faruq and his friends return every night to sit in front of their old home.

It is being demolished to make way for the construction of a modern neighbourhood, to be known as Msheireb Downtown Doha.

Contacted by AFP, an official from the municipality and urban planning ministry said it was “not responsible for people being taken out of” their homes.

Eviction notices were left for residents, but some have opted to stay until police arrive to remove them.

“After iftar (evening meal which breaks the day-long fast during Ramadan), they (police) come. If they find a door locked, they break it down and remove everything from the room,” said another Asian who works as an electrician.

“I would have thought theyâ€™d wait until the end of Ramadan at least,” said Sulayman, the eldest among the group, referring to the Muslim month of fasting that ends in late July.

Exhausted after a long day of work under the blazing desert sun, the migrants spend the afternoon searching for a place to sleep on the streets of Doha.

He arrived in Doha in 2009 after having paid a fee to a recruitment agency in Bangladesh that promised him work, social security and housing in Qatar.

But his hopes were shattered upon arrival in Qatar, where he was never given health insurance and left on his own to find housing.

Migrant workers in Gulf countries are usually housed by their companies, which should legally be their sponsors in the country.

But there are cases of workers sponsored by locals who are not their employers, and they tend to work independently.

The embassy of Bangladesh said it has not received any complaints.

“We are telling them if they are legally residing in this area, they should come to the embassy and we will help them,” said labour attache Shafiul Azim.

The workers feel they have no choice but to stay” in Qatar, where they still manage to send between 200 to 300 riyals ($55 and 82) per month to families back home.

In a nearby parking lot, day labourer Majid has been sleeping in his car since he was expelled. His work tools are stored in trunks inside the fence of the car park.

A few metres (yards) away lie beds, mattresses and other belongings of homeless workers who have sought shelter in the parking lot.

Doha already faces a housing shortage, even before the expected arrival of half a million more migrants to work on massive World Cup construction projects.