Home Business Clash of the Titans at Farnborough Air Show 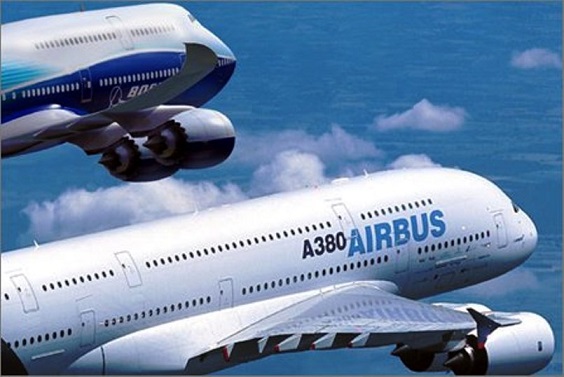 London: The seven-day Farnborough International air show will see billions of dollars being exchanged in deals between aerospace giants Boeing and Airbus and international carriers.

The event in Southern England from July 14 to 20 has already seen Airbus Groups announce deals for single-aisle jets and the new wide-body A330neo. AirAsia has ordered $13.8 billion of A330neos on Tuesday, while SMBC Aviation Capital took $11.8 billion of planes and two other lessors signed deals valued at $8.8 billion.

Airbus’s Tuesday announcements follows $21 billion in orders and sales agreements announced on the first day of the air show, almost triple the tally for Chicago-based Boeing, according to data compiled by Bloomberg Industries.

The A330neo’s first buyer at the show was Los Angeles-based Air Lease, whose chief executive officer, Steven Udvar-Hazy, had urged Airbus to offer a version of the 20-year-old A330 with upgraded, more-efficient engines. Air Lease also booked an order for 60 of Airbus’s single-aisle A321 model.

AerCap Holdings said it would buy 50 A321neos worth $5.14 billion, the first jet purchase since the world’s biggest independent aircraft lessor bought Hazy’s former company, International Lease Finance Corp., for $7.6 billion in May. The purchase of A320-family planes by SMBC was Airbus’s biggest single-aisle order from an aircraft lessor.

CIT Group Inc.’s leasing unit said Tuesday it would buy A330 wide-bodies as well as single-aisle aircraft valued at $4.7 billion, before Avolon Aerospace Leasing agreed to purchase A330s for $4.1 billion.

Boeing’s opening-day order announcements included five sales of its single-aisle 737 Max and six orders for the 787-9 Dreamliner, the newest version of the carbon-fibre plane, to Avolon. The Bloomberg Industries tally for Boeing and Airbus included orders and options.

BOC Aviation is set to commit to at least 50 of the Max jets. BOC Aviation also said Tuesday it would buy 43 A320-type jets from Airbus valued at $4.1 billion.

Jet buyers typically negotiate discounted rates, so list- rice aircraft valuations don’t translate directly into revenue. Plane makers also draw a distinction between firm orders, such as Air Lease’s agreement yesterday for A321neos, and commitments, such as the planned purchase of the A330neo.

Airbus face an important task of materialising the preliminary agreements which has seen 225 cancellations compared with 54 cancellations for Boeing.

Boeing Co. landed its biggest product launch purchase in aviation history for its 777x aircraft, as orders keep coming in at the air show. Qatar Airlines has stepped up and ordered 50 Boeing 777x jetliners valued at nearly $19 billion, plus the rights to buy another 50 of the new wide-body jets, pushing the total to about $38 billion.

Boeing Commercial Airplanes president and CEO Ray Conner says the sizeable order is a big endorsement for the new jet.Â  “These orders validate the market-leading role that the 777 and now the 777X will continue to play in the Middle East’s passenger and cargo market,” Conner said.

Qatar Airways also announced its intent to order four 777 freighters and options for four more, with a combined value of $2.4 billion at list prices.

Hainan Airlines says it is working toward a purchase agreement for 50 737MAX-8s, reaffirming the Chinese airline’s preference for an all-Boeing single-aisle fleet. The commitment, valued at more than $5.1 billion at current list prices, will be subject to the approval of the Chinese government.