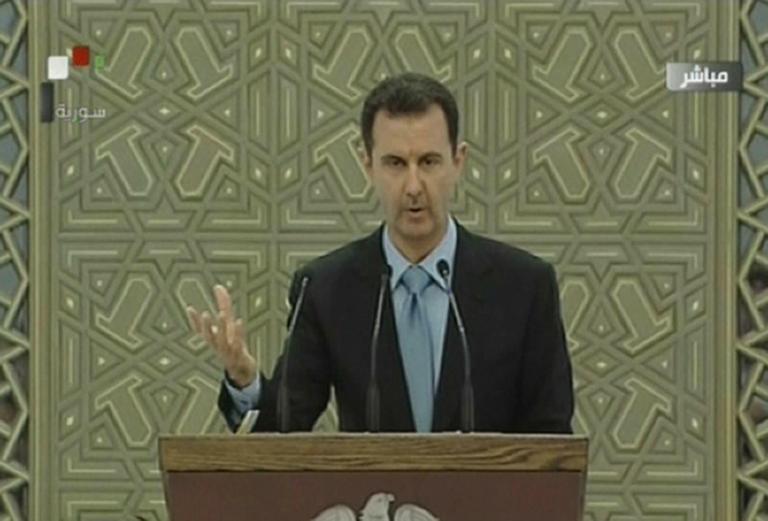 Syria’s President Bashar al-Assad was sworn in Wednesday for a new seven-year term, warning Western and Arab governments they will pay dearly for backing those who took up arms against him.

In a triumphant speech delivered after he took the oath of office at a red carpet ceremony in Damascus, Assad branded the 2011 Arab uprisings a “fake spring”.

Assad, 48, won a June election denounced as a “farce” by his detractors as it was staged more than three years into a devastating war that has killed more than 170,000 people and uprooted millions.

“Syrians, three years and four months… have passed since some cried ‘freedom’,” Assad declared, referring to the 2011 revolt.

“They wanted a revolution, but you have been the real revolutionaries. I congratulate you for your revolution and for your victory,” Assad told his supporters.

“Those who lost their way can now see clearly… the monstruous faces have been unveiled, the mask of freedom and the revolution has fallen.”

Assad’s inauguration comes with much of the world’s attention focused elsewhere, as violence engulfs Iraq and Gaza even though his troops continue to pound rebel-held areas of second city Aleppo.

During the first two years of the Syrian revolt, which began as a peaceful protest movement before transforming into an armed rebellion, the opposition’s Western and Arab supporters repeatedly insisted he must step down.

But the rise of the jihadist Islamic State (IS) has turned the tide and raised fears about the future.

Assad has repeatedly branded the revolt as a foreign-backed “terrorist plot”, refusing to recognise any genuine movement for change.

More than 1,000 people were invited to Wednesday’s inauguration, with Assad arriving at the presidential palace in a black sedan car before being met on the red carpet by a military band.

Parliamentarians and other guests cheered for Assad in the hall where he spoke.

Assad won the June 3 election held only in regime-controlled territories by 88.7 percent, defeating two other candidates seen as figureheads, rather than genuine opponents.

The opposition National Coalition branded the election a “farce” even before it was staged, in a statement later echoed by US Secretary of State John Kerry and NATO chief Anders Fogh Rasmussen.

Samir Nashar, a veteran dissident and member of the coalition, admitted the world’s attention has turned away from Syria.

“The situation in the Middle East is changing very fast. Unfortunately for Syrians, the instability has distracted the international community’s attention,” he said.

Nashar said Assad had managed to portray his regime as a more acceptable option “in comparison to the Islamic State and extremism, especially in the eyes of European countries.”

Analysts say the rise of the jihadists has been a “gift” for Assad, who from the outset branded the revolt as a foreign-backed “terrorist plot”.

The Syrian leader would try to take advantage of the West’s fear of Islamic extremism and present himself as a bulwark against the phenomenon, they said.

Assad “is telling them: ‘I am your man in the region, I can face the terrorists and extremists, give me your support and your recognition’,” said Nashar.

Following in the footsteps of his father and predecessor Hafez, who ruled Syria with an iron fist for 30 years, Assad has ignored the calls for his ouster.

Assad’s regime has been propped up with the tireless financial, military and diplomatic backing of allies Iran and Russia.

On the political front, Moscow and also Beijing have vetoed numerous UN Security Council resolutions that would have imposed sanctions on Damascus.

And on the ground, Lebanon’s Iranian-backed Shiite militant movement Hezbollah has fought alongside Assad’s forces, whereas rebels have remained divided and poorly armed.

Weakening the rebels further, they have fought IS since January, in battles that have killed more than 6,000 combatants.

Meanwhile, the brutality of IS and its takeover of territories straddling Syria and Iraq have gripped the West’s attention.

After the inauguration, the government has to resign and Assad will appoint a new prime minister to replace Wael al-Halqi.

But to the new opposition chief, Hadi al-Bahra, Assad “is at the core of the Syrian conflict (and) is still the main reason behind the unprecedented humanitarian crisis that is affecting the country.”

In a document distributed by his office, Bahra added: “The international community must not fall into the trap laid so cynically by the dictator.”