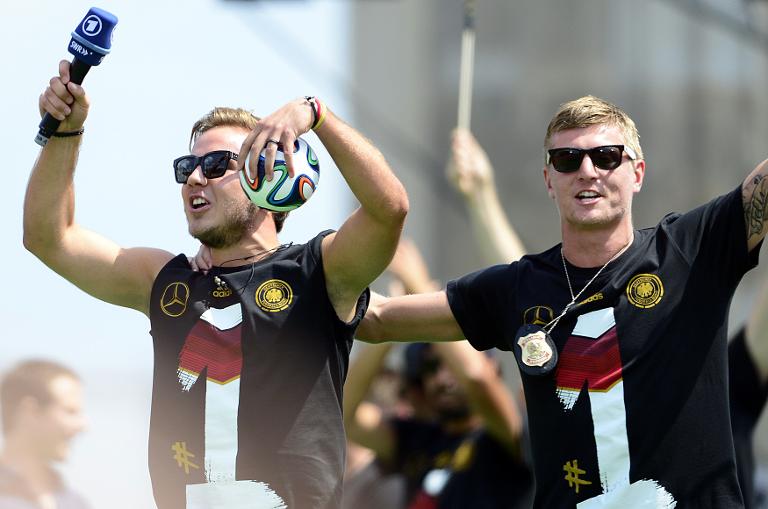 Six of the players including Mario Goetze, the sole scorer during Sunday’s 1-0 win over Argentina, performed a taunt often seen in stadium stands, on a stage set up behind the capital’s Brandenburg Gate before hundreds of thousands of flag-waving fans.

“This is how the gauchos (Argentines) walk, the gauchos walk like this,” they sang, hunched over, to cheers from the crowd.

The word “gaucho” is the South American equivalent of “cowboy”.

Several German newspapers called the display of swagger before the world’s media a sour note after an otherwise pitch-perfect World Cup.

“The victory celebration at the Brandenburg Gate turned into a gigantic own-goal,” the conservative daily Frankfurter Allgemeine Zeitung fumed.

“With a mean satire of the opponents in the final, the German world champions are squandering the image of an open-minded, tolerant nation.”

Berlin’s centre-left Tagesspiegel called the display “tasteless” and said it overshadowed the team’s gracious behaviour on the pitch in Brazil.

“The German modesty is over. Their joy wasn’t enough, they only find full satisfaction when they torture their mourning vanquished opponents a little,” it said.

“Maybe that is what will remain in the heads of many people outside Germany from this World Cup. And then the frenetic applause of the audience. They didn’t mean anything by it, that is probably true. But they showed that in football there are not only fools but damned fools.”

The criticism sparked a lively debate on Twitter under the hashtag #gauchogate, with many attacking what they saw as political correctness run amok.

A user with the handle @suburp said, “Germany has a word for #schadenfreude but struggles w fun and healthy national pride. It’s only FUSSBALL (football). regt euch ab. (Calm down).”

Die Welt newspaper said the dance did not mark a “shining moment” but added: “We don’t need to overplay it.”

A senior member of the opposition Greens, Juergen Trittin, agreed the dance had been “unsporting” but said the backlash was an overreaction.

“I wouldn’t give it greater political significance,” he said. “Let’s not jump to conclusions that it was about nationalism. That is not what is reflected in opinion polls.”

Trittin said Germans were proud of their winning football team “but have also learnt from their own horrible history”.

As the issue gathered steam online, the head of the German Football Federation (DFB), Wolfgang Niersbach, said he regretted any hard feelings.

“We are sorry if anyone took this the wrong way,” he said in a statement.

Niersbach said he would write his Argentine counterpart Julio Grondona “to make clear again that this action was in no way meant to be disrespectful”.

“We have great respect for Argentina, the best relations with the local federation and look forward to seeing each other again at the match in Dusseldorf,” referring to the national teams’ next game against each other on September 3.

He said the dance had arisen “spontaneously from the emotion and joy” around Germany’s fourth World Cup title.

“They are all absolutely decent and fair sportsmen who wouldn’t make fun of anyone and just wanted to party with the fans,” Niersbach said.