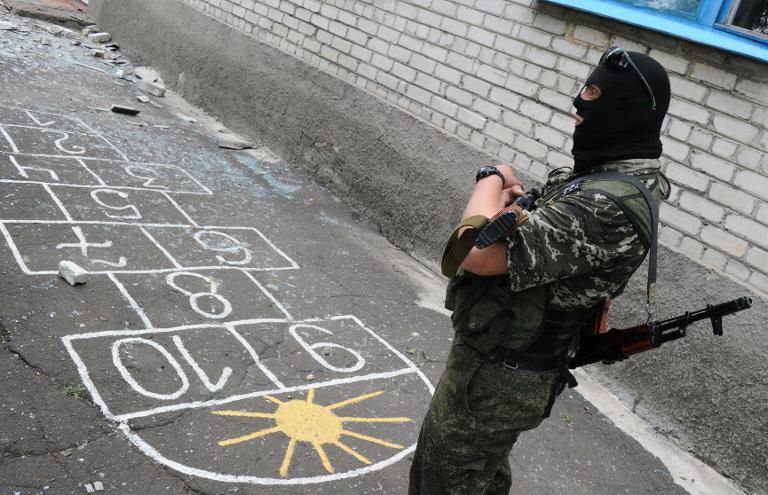 EU leaders meet on Wednesday to decide on new sanctions against Russia and pro-Moscow separatists in east Ukraine as Kiev raises fears of an imminent invasion by thousands of Russian troops.

A diplomatic source told AFP Tuesday that it was “looking very possible” that the European Union at its summit in Brussels would agree to a new round of sanctions and denied the move was due to pressure from Washington.

The United States meanwhile has signalled it could go it alone on toughening sanctions against Russia with a raft of unilateral measures that have been prepared which could cause new blows to Russia’s economy, a senior US official told AFP.

But efforts to coordinate with Europe continue as US Vice President Joe Biden told Ukrainian President Petro Poroshenko in a phone call Tuesday “that the United States was engaging with European leaders to discuss the imposition of costs on Russia for its continued escalation of the conflict,” a White House statement said.

Kiev has urged the West to impose new sanctions as it sharply raised the stakes in the explosive crisis by declaring that a Ukrainian transport plane downed Monday in the eastern conflict zone had been hit by a rocket fired from the Russian side of the frontier between the two ex-Soviet states.

Russia has broken with its traditional denials of all links to the uprising by not publicly responding to the charge.

A top Ukrainian general went a step further by telling a live television audience in Kiev that he feared a Russian invasion was imminent.

“Ukraine, like never before, stands on the cusp of a wide-scale aggression from our current northern border,” said National Security and Defence Council Deputy Secretary Mykhaylo Koval.

The former defence minister said the Kremlin had parked 22,000 troops in the annexed Black Sea peninsula of Crimea and had other units stretching from the north-central region of Chernigiv to the southeastern edge of the Russian-Ukrainian border on the Sea of Azov.

President Vladimir Putin rejects accusations of orchestrating the uprising in reprisal for the February ouster of a Russian-backed leader and Kiev’s subsequent signature of a historic EU deal instead of a new Kremlin pact.

Fears of Russia’s direct intervention and the soaring civilian toll — 23 more people were reported killed overnight — has intensified pressure on Western allies to quickly address their worst standoff with Russia since the Cold War.

Germany and France have been spearheading EU efforts to revive a Ukrainian truce that could save the bloc from having to introduce sweeping economic sanctions against energy-rich Russia to which Putin has already vowed to respond.

The United States has pressed EU leaders to impose arms sale restrictions and limited financial sanctions on Russia at their summit on Wednesday.

Ahead of the meeting, Polish Foreign Minister Radoslaw Sikorski, whose country is an advocate for Ukraine at the EU, met in Kiev Tuesday with Poroshenko and other top Ukrainian officials.

Ukrainian foreign ministry spokesman Vasyl Zvarych had expressed confidence that the consultation would be held on Tuesday but there has been no word on whether or not it took place.

An observer team from the Organisation for Security and Cooperaion in Europe on Wednesday is due to visit the Ukrainian-Russian border, which became the conflict’s new frontline after rebels last week evacuated towns and cities that they had held since early April in the coal mining region of Donetsk.

The militias have since concentrated their forces around the cities of Donetsk and Lugansk — both capitals of their own “People’s Republics” — and are hoping for new weapons deliveries to revive their campaign.

Witnesses in Donetsk told AFP they had seen the insurgents dispatch four tanks and eight armoured transport vehicles towards Lugansk to help repel an intensifying air and artillery push by Kiev forces on the city of 420,000 people.

Defence officials said four of the downed plane’s eight crew had been rescued in rebel territory.

“Two servicemen were captured by the rebels and efforts to rescue them are under way. The fate of the other two crew is unknown,” the Ukrainian military said in a statement.

Ukraine also temporarily grounded all its jets in the two separatist regions as a safety precaution.

Lugansk on Tuesday declared three days mourning for 17 civilians killed since the weekend in artillery strikes that both sides have blamed on each other.

But local authorities reported the death of nearly two dozen more civilians across the rustbelt — including 11 people killed when their apartment block crumbled after being hit by a missile in the Russian border town of Snizhne.

A defence spokesman said six Ukrainian soldiers had also been killed overnight as the toll in the low-scale war approached 600 civilians and fighters on both sides.

The National Security and Defence Council reported the death of 258 servicemen and capture of another 45 since Kiev launched its “anti-terrorist operation” on April 13.