Home Sports Dhoni says has no regrets over Anderson charge 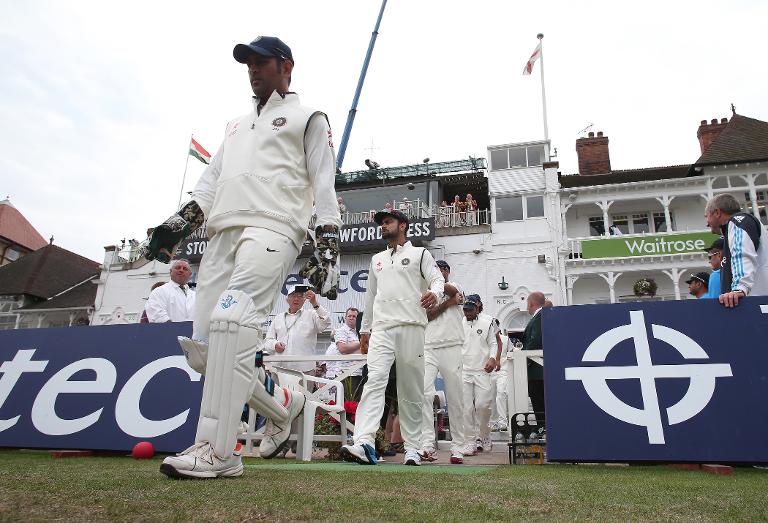 India captain Mahendra Singh Dhoni insisted Wednesday his side had been right to complain about the conduct of England’s James Anderson.

If the charge is upheld, Anderson could be banned for as many as four Tests and England have responded by levelling a charge of their own against Jadeja.

England captain Alastair Cook suggested at a pre-match press conference at Lord’s, ahead of Thursday’s second Test, that India’s complaint had been a deliberate tactic to get Anderson banned from the rest of the five-match series.

However, Dhoni — speaking later at Lord’s — said: “We felt what happened was wrong so we went ahead with the charges.

“Itâ€™s not something that we have done. Letâ€™s realise the fact.

“In a press conference you can ask me tough questions.

“You can put it in whatever way you want to but there are certain things that need to be followed, and it should be followed.

“Frankly, usually we have been on the receiving end a lot of times where somebody starts something and we retaliate and we get fined or different kinds of offences are levelled against us,” added Dhoni of an India coached by former England boss Duncan Fletcher.

Dhoni added: “It was good on Jadeja’s part to not really do something.

“It could have gone a bit far, but I felt he addressed this in the most appropriate manner.

“Someone has to back off at the right time. At the end of the day we play sport and lot of people look up to us, and there is a lot of responsibility on us.

“There have been a few individuals from our side in the past that have crossed that line. Itâ€™s a difficult one. You can be aggressive, you can be vocal and thatâ€™s fine but there are certain guidelines and we should be following all of them.”

Earlier on Wednesday, Cook accused India of making a “mountain out of a molehill” in an effort to try to get Anderson banned.

“I think so, I think that’s pretty much where it’s come from,” Cook said. “It’s probably a little bit of a tactic by India.

“For Jimmy, all the lads will rally round him. He’s a stalwart of our side.”

Cook added he believed completely the version of events that Anderson had told him but that, under ICC regulations, he could not reveal the conversation.

The incident involving Anderson and Jadeja is said to have happened after the players left the field for lunch on Thursday’s second day when the Indian was batting and taken place as the teams entered the narrow corridor of the Trent Bridge pavilion.

The ICC’s statement Tuesday added: “It is alleged that this was a continuation of a verbal altercation between Anderson and Jadeja as they were walking from the field.”

England are understood to have responded by accusing Jadeja of a Level Two offence rather than one at Level Three in case this looks like an admission a physical confrontation took place.

The ICC said Tuesday a disciplinary hearing under a judicial commissioner would be held “as soon as reasonably practicable”.

However, Anderson is unlikely to miss either the second Test, or indeed next week’s third of the five-match series in Southampton, because any hearing will probably not take place before then.