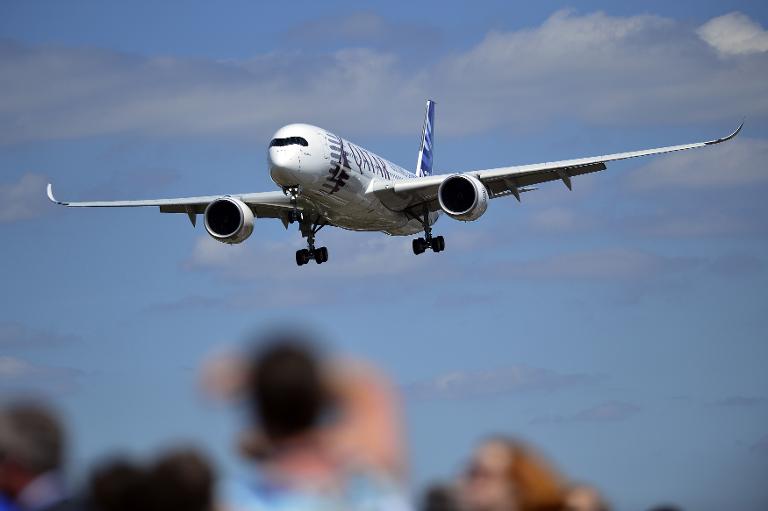 Airbus racked up orders for its new long-haul A330neo plane on Tuesday, as airlines and leasing companies cash in on demand for cheap long-haul air travel.

As the European aircraft maker celebrated strong demand for its neo planes at one of the aviation industry’s key shows in Farnborough, near London, the US military announced another setback for the most expensive programme in Pentagon history.

Washington said it would not send its F35 fighter jets to the week-long Farnborough airshow because of safety concerns.

Officials had still been hopeful that the F-35, grounded by an engine fire in the United States last week, would appear after it missed the show’s Monday debut.

US Navy and Air Force military authorities cleared the planes for flights earlier Tuesday but they imposed several restrictions, including mandatory engine inspections after every three hours in the air, spokesman Rear Admiral John Kirby told a news conference.

Given the timing of the show and the flight restrictions, “this was the most prudent and safe decision,” he said.

The absence of the new warplane, touted as a technical wonder that will form the core of America’s future fighter fleet, is a setback for the troubled programme as the show had been seen as the plane’s international debut.

At nearly $400 billion, the F-35 is the most expensive weapons programme in US history and the absence is a blow to officials eager to reassure foreign partners and potential customers that it remains on course.

Meanwhile, Airbus has won commitments for 105 of its neo planes, surpassing its original target of 100 at the key industry event with several days still to go.

“I think this is going to be a remarkable plane,” said Tony Fernandes, co-founder of low-cost airline AirAsia X, which on Tuesday signed an outline deal for 50 of the planes valued at $13.75 billion (10.11 billion euros) at catalogue prices.

Also Tuesday, US leasing company CIT said it planned to buy 15 A330-900neo planes and Dublin-based lessor Avolon said it had signed a memorandum of understanding for 15 of the aircraft.

Air Lease Corporation on Monday announced a similar deal for 25 of the wide-body neo planes.

In total, Airbus said it had sealed orders and commitments for almost 400 of its planes worth more than $60 billion during the first two days of the show — far outpacing US rival Boeing.

But the European aircraft maker also hit a bump on Tuesday when Qatar Airways said it will claim compensation because of the delayed delivery of its first A380 superjumbo, without giving further details.

Qatar Airways expected to take delivery of the super-jumbo in May but the order has been delayed.

“There are issues with the interior and exterior of the airplane,” said Akbar al Baker, the airline’s chief executive, elaborating on the reasons for the delay.

“We are a very demanding customer, we want everything to be absolutely perfect. It is absolutely disappointing to Qatar Airways.”

On Tuesday, Boeing said it had won a number of orders for its passenger planes from American leasing companies potentially worth a total of about $10.0 billion.

Boeing, ahead of the show, raised its forecast for industry aircraft sales over the next two decades to $5.2 trillion, driven largely by demand from low-cost carriers.

Air Lease Corporation has ordered 26 Boeing jets in a deal valued at $3.9 billion.

“These aircraft will add to our growing fleet of fuel-efficient aircraft that remain in high demand from our airline customers,” said Jeff Knittel, president of CIT Transportation & International Finance.

Intrepid Aviation meanwhile ordered six 777-300ERs and has an option to buy four more in a deal worth about $3.2 billion, Boeing said on Tuesday.

Brazilian group Embraer, the world’s third-largest commercial planemaker, has won orders worth billions of dollars for its regional jets at Farnborough, including its new single-aisle E195-E2 jets.