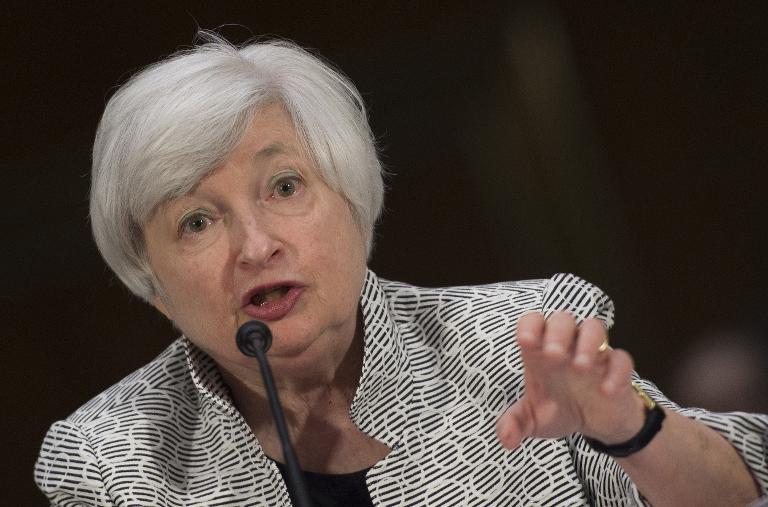 The Federal Reserve could raise its interest rate sooner than expected as the jobs market improves, Fed Chair Janet Yellen said Tuesday, adding the Fed was closely watching for risks.

Yellen, in testimony to Congress, said the policy-setting Federal Open Market Committee (FOMC) was closely following developments in the economy to determine the future path of its federal funds rate target, pegged near zero since 2008 to support the economy’s recovery from deep recession.

“Although the economy continues to improve, the recovery is not yet complete,” Yellen said in the Fed’s semi-annual report to Congress.

“If the labor market continues to improve more quickly than anticipated by the committee, resulting in faster convergence toward our dual objectives, then increases in the federal funds rate target likely would occur sooner and be more rapid than currently envisioned,” Yellen told the Senate Banking Committee.

But, she said, the future path of interest rates “likely would be more accommodative than currently anticipated” if economic performance is disappointing.

Markets expect the first Fed rate hike to come in mid-2015, and Yellen said it would come “sometime in 2015.”

She noted that the Fed’s forecast for where the rate would stand at the end of 2015 was a median estimate of about one percent, “a positive but relatively low level.”

Yellen said the economy was moving toward the Fed’s dual goals of maximum employment and price stability of around 2.0 percent inflation.

After a sharp economic slump in the first quarter, largely due to severe weather, “a number of recent indicators of production and spending suggest that growth rebounded in the second quarter, but this bears close watching.”

She stressed there was considerable uncertainty surrounding the Fed’s projections for economic growth, unemployment, and inflation.

“FOMC participants currently judge these risks to be nearly balanced but to warrant monitoring in the months ahead.”

Although inflation has moved up in recent months it remains below the Fed’s longer-run target, she said.

And Yellen expressed concern that the labor market is still showing “significant slack” despite job growth over the first half of the year that is at a “somewhat stronger pace” than in 2013.

The unemployment rate has fallen nearly 1.5 percentage points over the past year and stood at 6.1 percent in June.

Warning of the potential for “false dawns” in the outlook, Yellen said: “There are substantial headwinds facing the economy.”

Income growth has been “exceptionally depressed,” the housing market recovery appears stalled amid tight credit conditions, and “unusually tight” government fiscal policy is holding back the US recovery, she said.

Given the challenges from the “very large” Fed balance sheet and excess reserves in the banking system, the Fed chief said it was difficult to use the target fed funds rate — now zero to 0.25 percent — as the prime monetary tool.

“The main tool we’ll use is the interest rate we pay on reserves,” she said.

Yellen emphasized that the decision to raise rates will depend on unfolding US economic developments and the FOMC’s outlook.

“The economy is operating significantly below potential… that’s why we’re holding rates low,” she said.

But Yellen pointed to a brighter future.

“I and other FOMC participants continue to anticipate that economic activity will expand at a moderate pace over the next several years, supported by accommodative monetary policy, a waning drag from fiscal policy, the lagged effects of higher home prices and equity values, and strengthening foreign growth.”

The Fed chief also said that the Fed plans to stop pumping money into the economy through its asset-purchase program in October but that the wind-down was data dependent and “not on a preset course.”

The FOMC has been tapering the quantitative easing program in incremental steps of $10 billion this year, bringing monthly bond purchases down from $85 billion in December to $35 billion in June.