Home Sports Woods back at scene of emotional 2006 Open triumph 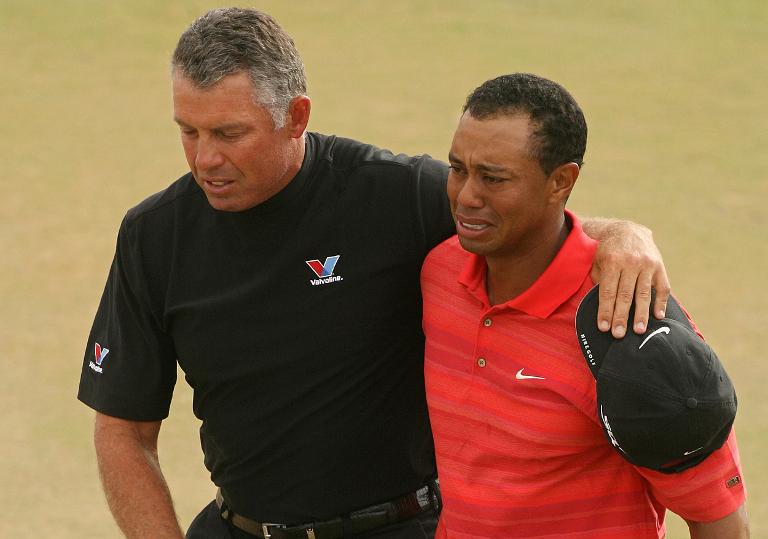 Tiger Woods makes an emotional return to Royal Liverpool this week as he relives the scene of his last Open triumph in 2006 when he won just weeks after his father’s death.

The 38-year-old Californian admits much has changed in his life since he fell into the arms of his caddie at the time, Steve Williams, sobbing with emotion at the end of a superb final round on the Hoylake layout and is delighted to be back.

“It feels great to come back to Hoylake and to this venue. It meant a lot to me in my life at the time,” Woods told a packed press conference on Tuesday.

“The people are fantastic. I was going through a pretty tough time in my life at the time, and people were very supportive that week.”

“Now it’s eight years on and my life has certainly changed a lot since then. That was a very emotional week.

“As you all know, I pressed pretty hard at Augusta that year, trying to win it, because it was the last time my dad was ever going to see me play a major championship. And then I didn’t play well at the US Open.

“Then came here and just felt at peace. I really, really played well. On Sunday I really felt calm out there. It was surreal at the time.

“I’ve had a few moments like that in majors where I’ve felt that way on a Sunday and that was certainly one of them,” added the 14-time major winner, who only trails Jack Nicklaus who leads on 18.

Woods’ father Earl, a Vietnam War veteran, remains an inspiration for Woods and maybe another reason the American can never be written off at a course that means so much.

“That year in 2006 was the same. I wouldn’t necessarily say it was every day but certainly on Sunday I really felt that my dad was with me on that one round.

“I said it back then in ’06 that it was like having my 15th club. I felt that type of at peace when I was out there.

Woods, who has only played one competitive tournament, at the Congressional golf club in Maryland, where he missed the cut following back surgery in late March, arrived early in Britain in his buildup and says his lack of tournament experience is something he’s dealt with before.

“I think that I’ve been in circumstances like this before. If you remember in 2008, I had knee surgery right after the Masters.

“I teed it up at the US Open and won a US Open. I didn’t play more than nine holes and the Sunday before the US Open I didn’t break 50 for nine holes and still was able to win it in a playoff, with an ACL (anterior cruciate ligament damage) and a broken leg.

“I’ve proven I can do it, it’s just a matter of putting my game into place and giving myself the best chances this week to put the ball in the correct spots, to be aggressive when I can, and obviously to hole putts.

“That’s a recipe you find for every major championship, but I’ve just got to do it this week.

The former world number one who comes into the Open now ranked seven also said he is almost back to full fitness.

“My game is getting better and playing at Congressional was a big boost to me. The fact that I was able to go at it that hard and hit it like that with no pain.

“I’ve gotten stronger since then, I’ve gotten more explosive and I’m only going to get stronger and faster, which is great.