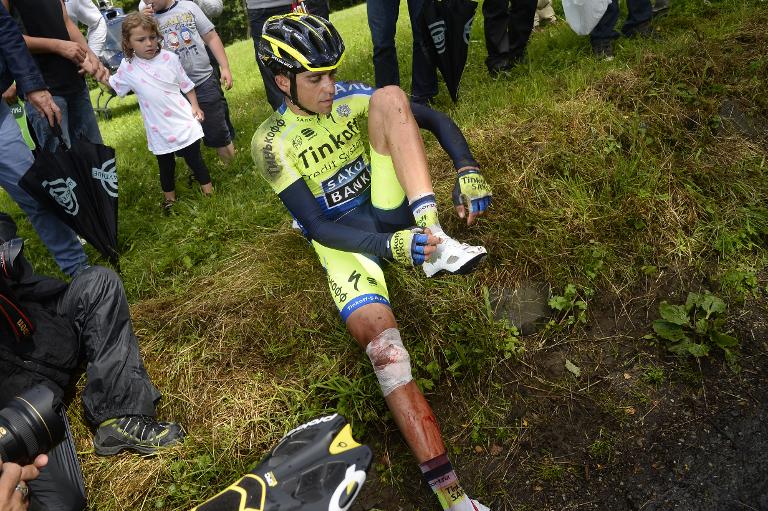 Alberto Contador has revealed that he came a cropper at the Tour de France because he was trying to eat.

The two-time former winner crashed on a fast descent on Monday’s 10th stage and suffered a broken shinbone, forcing him to pull out of the Tour.

The Spaniard is known as one of the better descenders in the peloton but it was the desire to refuel on route that caught him out.

“I grabbed a (nutritional) bar, I had only one hand on the handlebars and I hit a pothole,” he said.

“I’m sad and disappointed, a lot of effort and sacrifice has been ruined.

“I had prepared better for the Tour than ever before, I wanted to win the stage.”

Contador’s retirement from the Tour followed that of reigning champion Chris Froome, who broke his hand and wrist in crashes before quitting last Wednesday.

He has since said he will now aim for the Vuelta a Espana, which begins at the end of August, and took to Twitter to wish Contador a speedy recovery and a meeting at the Spanish Grand Tour.

But Contador, 31, said he couldn’t be sure he would be fit in time.

“The recovery time is between five or six weeks and three in the best case scenario,” he said.

“I’m not ruling it out (riding the Vuelta) it depends on how I progress.”

If the pair were to meet at the Vuelta it would be a repeat of their battle two years ago.

Froome had finished the Tour in second place riding for teammate Bradley Wiggins and wanted to test himself as a team leader.

He had already finished second on the Vuelta the year before when again riding for Wiggins, who managed only third.

Contador was coming back from his two-year doping suspension and the Vuelta was his first major race.

He went on to win, pipping Spanish rivals Alejandro Valverde and Joaquim Rodriguez, the latter of which will again target the Vuelta this year after his Giro d’Italia plans were ruined by a crash.

Froome started the race well, initially battling Rodriguez for the lead, but in the final week tiredness from the Tour caught up with him and he faded to a distant fourth.