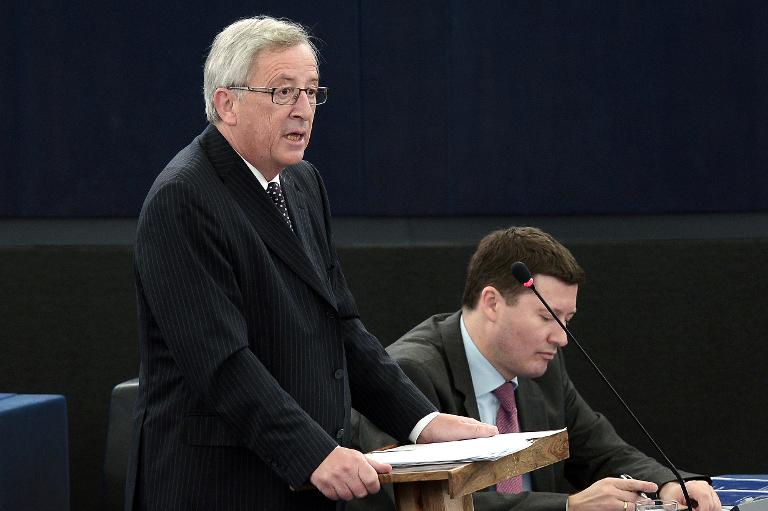 Jean-Claude Juncker made a heartfelt plea to revive both Europe’s economy and spirit as he laid out his vision for the future if parliament approves him Tuesday as head of the European Commission.

“Europe has lost much of its credibility, the gap between the European Union and its citizens has grown,” he said as he fought to muster wide support for his bid for the powerful post.

The European Parliament vote, expected at around 1100 GMT, paves the way to an extraordinary EU summit Wednesday in Brussels that will allow EU leaders to complete a jigsaw of appointments for the next years, including a new EU foreign policy chief as well as a successor to Herman Van Rompuy as EU Council president.

Despite stiff opposition from British Prime Minister David Cameron, who wanted a new and more reform-minded face to reboot the EU, longtime Luxembourg premier Juncker was nominated 26-2 by EU leaders to take over from outgoing Commission president Jose Manuel Barroso.

He faced angry jeers Tuesday from Britain’s increasingly popular eurosceptics when he spoke out strongly in favour of the euro, saying “the euro protects Europe”.

A conservative and a staunch pro-European, the 59-year-old Juncker pledged that his five-year Commission would be socially-minded and less bureaucratic while working to revitalise and re-industrialise the European Union.

“There is a 29th member of the EU emerging, the state of those without jobs… I would like this 29th member to be integrated with the others,” he said as he called for a 300-billion-euro three-year investment plan.

“The EU lost competitiveness because it was stuck in neutral, it must once again move forward,” he said, but “we must not achieve that at the expense of social policies.”

He also pledged more burden-sharing in tackling Europe’s problems in coping with the floods of migrants knocking at its doors and said he would name a commissioner with a new portfolio to defend fundamental rights.

Juncker needs an absolute majority of 376 votes in the 751-seat assembly.

He is hoping to muster most of the 480 votes of the leading mainstream parties, the conservatives and social-democrats, as well as the smaller liberal group.

But some 60 MEPs from the two main groups are reportedly set to withhold support, meaning Juncker needs to rally members in the Greens group.

– ‘Nations at each others’ throats’ –

If Juncker wins parliament’s backing, his next hurdle is to put together a new Commission for the next five years made up of one member per EU member state.

With nations at each others’ throats for the key jobs — economic affairs, energy, competition — the composition of each commission is always a difficult affair.

This one has thrown up a new challenge. Juncker is worried at the lack of women being proposed by member states to join his team.

Last week the women of the current Commission, which steps down in autumn, launched a campaign to get 10 or more female candidates named to the next EU executive.

A letter circulated for signature by the nine women says Juncker needs to improve on the record of Barroso, who gave around a third of jobs to women as commission head over the past decade.

“The European Union is committed to making continual progress towards gender equality. Such progress demands an increase, not a decrease in the number of female commissioners,” the letter says.

Having at least nine women on his executive is one of the conditions set by the Liberals to back Juncker.

But so far, capitals are putting forward only men. On Tuesday, Britain named Jonathan Hill, the leader of the House of Lords, as its nominee.

The names of a few female candidates are circulating, among them Italian Foreign Minister Federica Mogherini, and current Bulgarian commissioner Kristalina Georgieva — both as candidates to take over from foreign policy chief, Britain’s Catherine Ashton.

If Juncker wins the vote, he will submit a full line-up of 28 commissioners to lawmakers in October.