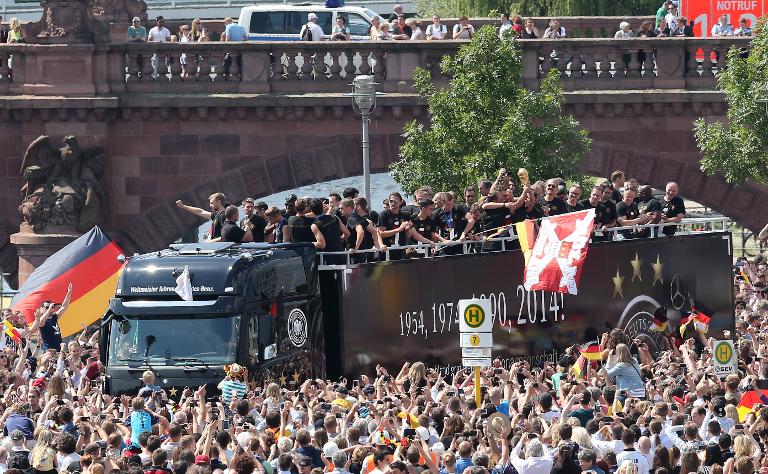 The flag-waving crowd, which began gathering before dawn, erupted in applause under warm summer sunshine when the triumphant players arrived from Rio de Janeiro.

Germany coach Joachim Loew told more than 250,000 supporters at the so-called Fan Mile stretching behind the Gate, the symbol of national unity, that they shared the title with his players.

“We are all world champions,” he said. “Of course we are all overjoyed now to be with the fans.”

Captain Philipp Lahm hoisted the World Cup trophy to a giant roar from the crowd.

“I’ve been dreaming about this since I was a child,” Lahm said as he passed the golden statuette to his fellow players.

Team members wearing black shirts emblazoned with the number one took the stage in groups to greet ecstatic supporters, many of whom travelled from across the country and skipped work to join the party.

They carried a long banner reading “Obrigado Fans”, “thank you” in Portuguese in a nod to tournament hosts Brazil, and “the fourth title is ours”.

Mario Goetze, who scored the only goal in Sunday’s nail-biter final against Argentina, called the Mannschaft’s win “a dream”.

“We played an amazing tournament,” he said to chants of “Super Mario”. “It’s an incredible feeling.”

Midfielder Bastian Schweinsteiger appeared with the black, red and gold German flag draped from his shoulders, with a bandage still affixed below his eye from a cut he suffered in a clash during the final.

“Now we finally have the damn thing,” he said, clutching the trophy.

The team touched down in the late morning at Berlin’s Tegel airport on a Lufthansa jet re-branded “Fanhansa” and “Victors’ Plane”, as thousands of supporters waited on a viewing platform.

“This is a historic event,” said 34-year-old bus driver Bernd Hesse, who followed all the matches in Brazil on the radio when he was behind the wheel.

He noted that Germans had waited 24 years to bask in the glory of a World Cup victory, the first since the reunification of the country in 1990 following three wins by the former West Germany.

“It’s not every day that you get to see something like this,” he said.

Lydia Lampa, a 28-year-old advertising executive, stopped by the airport with a friend on her way to work.

Wearing a Germany jersey adorned with the coveted fourth star for the latest World Cup win and a Hawaiian-style garland of plastic flowers in the national colours, she said she had watched every World Cup match featuring the Mannschaft.

“This is my way of saying thank you,” she said.

“All the games were exciting and I wanted to see the players at least once live.”

Fans had lined the team’s route as black buses ferried the players to central Berlin from the airport, while construction workers waved from scaffoldings and dozens of cyclists followed the motorcade, their bicycles draped with Germany banners.

Players tweeted photos of the fans, with Mesut Oezil writing “What a crowd! Unbelievable!”

Supporters on the Fan Mile sang “this is what victors look like” under a sea of German flags, which rarely make an appearance outside major sporting events in the country in deference to its militaristic past.

Ulrich Felgentreff said he was born in 1954, the first year West Germany won the World Cup — just nine years after the horrors of World War II, as the country was gradually rejoining the community of nations.

“Everyone has an immense feeling of pride,” he said, decked out with his family in black, red and gold. “And that pride grows title by title.”

By contrast, 18-year-old fan Sven Engel was not even born the last time West Germany won.

“Germany deserves this title, they were much stronger than the other teams,” Engel said.

“But the Brazil match was still the best,” he said, referring to the jaw-dropping 7-1 thrashing of the hosts during the semi-final.

The championship has bolstered an already upbeat national mood, with the German economy humming and popular Chancellor Angela Merkel at the helm of a stable government.

Even normally staid business daily Handelsblatt joined in the celebration.

“The German team embodies many of the qualities that typify Germany today: commitment, discipline, technical skill and tactical know-how,” it quoted the head of Germany’s top bank Deutsche Bank Juergen Fitschen as saying.