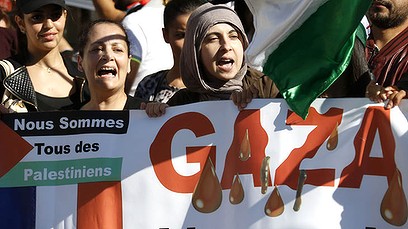 Israel which has been preparing for the possibility of a ground invasion of Gaza said it was seriously considering the Egyptian proposal. The initial reaction of Hamas was less committal but was not an outright rejection.

The proposal envisioned a cease-fire beginning at 9 a.m. local time on Tuesday. It called for border crossings to Gaza to “be opened,” with the movement of people and goods to be “facilitated once the security situation becomes stable on the ground.” Within 48 hours of the initial cease-fire taking hold, talks are to be held in Cairo with the Israelis and the Palestinian militant factions on conditions for a longer-term truce, according to the text of the proposal.

Significantly, Secretary of State John Kerry is expected in Cairo as early as Tuesday. And a meeting of Prime Minister Benjamin Netanyahu’s security Cabinet had been called for early Tuesday to discuss the proposal and that it was “being considered very seriously.”

Hamas, which had said it was prepared to fire rockets indefinitely, appeared to want better terms. Sami Abu Zuhri, a Hamas official in Gaza, wrote on his Facebook page, “The responses of resistance will continue until the demands of our people are achieved.

Any unilateral Israeli cessation has no value in the light of the large crimes and the disastrous humanitarian situation.” Osama Hamdan, a spokesman for the Islamic group, was more dismissive. “The Situation Room” that Hamas did not receive the proposal directly from the Egyptians. That, he said, meant it was “an initiative for the media. It’s not a political initiative.”

One of Hamas’ demands has been the opening of the Rafah border crossing between Gaza and Egypt, but the Egyptian Foreign Ministry spokesman said the proposal refers only to crossings “between Israel and Gaza.”

Egypt is widely considered the natural regional mediator in such conflicts. But Egypt’s relations with Hamas, an offshoot of the Muslim Brotherhood, have turned bitter since the military ouster last year of Egypt’s elected Islamist president, Mohammed Morsi, a leader in the Brotherhood.

Under the new president, Abdel-Fattah el-Sissi, a former general who led the military takeover, Egypt has shut down most of the tunnels beneath its border with Gaza that were both an economic lifeline for the Palestinian coastal enclave as well as a major channel for weapons smuggling.