Home Sports Kaymer struggles but stays in command at US Open 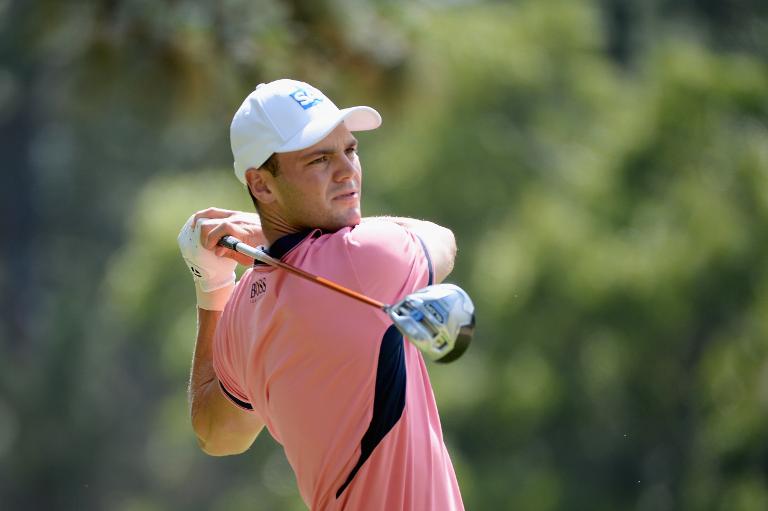 Germany’s Martin Kaymer battled through adversity to remain in command of the US Open, closing with a birdie to seize a five-stroke lead after Saturday’s third round at Pinehurst.

Kaymer, whose 65-65 start was a 36-hole US Open record, made bogeys on three of the first six holes and two more on the back nine Saturday but eagled the fifth and sank an eight-foot birdie putt at 18 to fire a two-over par 72 and stand on eight-under 202 for 54 holes.

“It was good. I didn’t play as good as the first two days but I kept it very well together,” Kaymer said. “Though I didn’t hit as many great shots, overall it’s a decent round.”

“I’m looking forward to see how I react to certain situations,” Kaymer said. “Anything can happen. I can lead by seven or eight shots after nine holes. I can be down to all square. So it will be an exciting round.

“It’ll be interesting how I handle it.”

Not since Mike Brady squandered a five-shot edge in 1919 has a US Open 54-hole leader had such a margin and failed to win the title.

Tougher pin placements by the US Golf Association (USGA), what Kaymer’s playing partner Brendon Todd called “a little bit of a revenge,” produced only two players with sub-par rounds — Americans Rickie Fowler and Erik Compton. Each shot 67 to share second on 207.

“I put myself into contention,” Fowler said. “It was all about moving forward. The course played significantly harder. You still have to be aggressive even when you are trying to play safely.”

Sweden’s Henrik Stenson and American Dustin Johnson, who each shot 70, shared fourth on 208 with American Brandt Snedeker the only other player under par for the event on 201.

If Snedeker wins, he would match the greatest last-day comeback in US Open history, the epic seven-stroke rally by Arnold Palmer in 1960 at Cherry Hills.

“You come out fresh, new mindset,” said Snedeker. Seven shots is what I’m behind. That’s nine holes out here. I know a lot can happen. I shot 30 on the front nine this week before. I can go do it again and put some pressure on them and have some fun.”

– Challenge is to keep going –

Kaymer, who seeks his second major title after the 2010 PGA Championship, is coming off a Players Championship victory last month that snapped a three-year win drought on top-level tours.

“If you play a golf course like this, it can be gone very quickly. You could see it. I made three bogeys the first six holes. I didn’t hit many fairways,” Kaymer said.

The 29-year-old from Dusseldorf took a bogey at the second and needed a 20-foot putt at the fourth just to salvage a bogey after his tee shot landed against a pile of pine straw.

“It was a very big putt to make that bogey,” Kaymer said. “To lose only one on a hole like this, it’s OK.”

At the par-5 fifth, Kaymer blasted his approach from the sand to five feet from the cup and made the eagle putt.

But at the sixth, Kaymer rolled a 50-foot birdie attempt off the far side of the turtle-backed green, then chipped back near the hole and again rescued a bogey.

“I felt like if you have 25 or 30 feet on every green, you’ve done well,” Kaymer said. “On 18 it was probably the easiest pin today and fortunately I could take care of it.”

Defending champion Justin Rose of England was on 211, nine off the pace, as were Zimbabwe’s Brendon de Jonge and Masters runner-up Jordan Spieth, who were Kaymer’s top rivals at times.