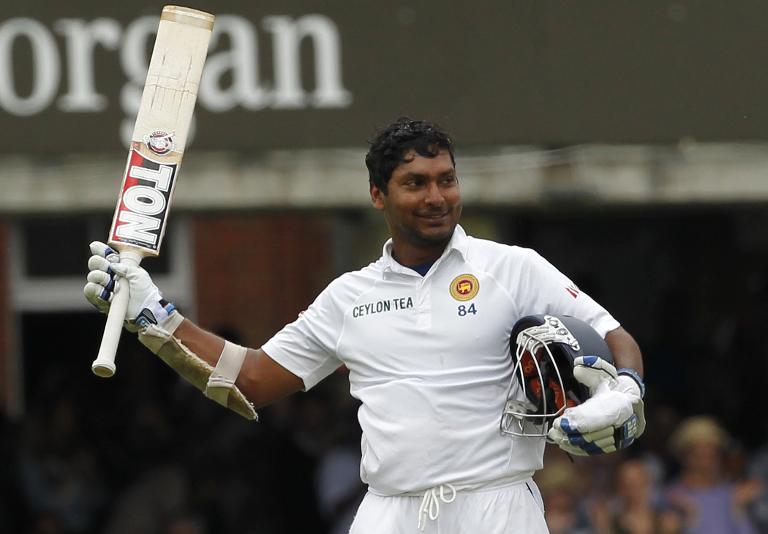 Sri Lanka were 415 for seven at stumps on the third day of this two-match series, with left-hander Sangakkara’s 147 key to their avoiding the follow-on.

His century made the 36-year-old the first man to score hundreds in three consecutive innings on three separate occasions in Tests.

England, however, still led by 160 runs after Joe Root’s maiden Test double century had taken them to a total of 575 for nine declared.

Sangakkara was involved in partnerships of 97, 126 and 96 with Kaushal Silva (62), Mahela Jayawardene (55) and Sri Lanka captain Angelo Mathews (79 not out) respectively.

He was all assurance until caught behind off Moeen Ali to give the debutant off-spinner his first Test wicket.

“A hundred at Lord’s is something I always wanted,” the 36-year-old Sangakkara told Sky Sports.

“Coming on this tour, probably my last in England, I just wanted to enjoy it. If it happened, I happened.

“Lord’s is a very special place to play…It feels very special to get on the honours board,” added the left-hander, the seventh Sri Lankan to score a Test hundred at Lord’s.

Paul Farbrace, until recently the coach of Sri Lanka but now deputy to Peter Moores in the England set-up, said he was glad Sangakkara had reached a cherished landmark.

“Personally, I’m very pleased for him…delighted he’s got his hundred in Test cricket at Lord’s that he wanted.

But his bowlers were largely frustrated by Sangakkara, whose career batting average of 58.53 has only been bettered by players who’ve appeared in at least 25 Tests by Australia’s Don Bradman and the England duo of Herbert Sutcliffe (60.73) and Ken Barrington (58.67).

Sri Lanka resumed Saturday on 140 for one, with opener Kaushal Silva 62 not out and Sangakkara unbeaten on 32.

Play commenced in gloomy overcast conditions that led to the floodlights being switched on.

Silva had added just one to his score when, trying to sway out of the way of a James Anderson bouncer, he was caught behind.

Sangakkara entered the 90s by lofting Ali down the ground for four.

Liam Plunkett, playing his first Test in seven years, tried bowling short from around the wicket to a packed legside field but to no avail.

And when the fast bowler reverted to over-the-wicket, Sangakkara straight-drove for an all-run four to move on to 97.

By now, Cook had brought on part-time off-spinner Root in a bid to break the stand.

Sangakkara, though, cover-drove Root for his 10th boundary to complete a 182-ball century — his 36th in 123 Tests.

The clearly-elated Sangakkara was embraced by Jayawardene, who has two Test hundreds at Lord’s to his credit, after achieving a feat that proved beyond modern batting greats Sachin Tendulkar, Brian Lara and Ricky Ponting.

“It was very good to have Mahela there. He knows how special it is,” Sangakkara said.

But the arrival of the new ball saw England at last separate the veterans when Stuart Broad had Mahela Jayawardene plumb lbw.

And when Lahiru Thirimanne fell shortly afterwards, Sri Lanka were 289 for four — nearly 100 runs shy of the follow-on.

But Mathews counter-attacked with a 64-ball fifty.

Meanwhile Sangakkara was still playing some classic shots, including a majestic cover-drive for four off Plunkett.

But trying to cut Ali, he was well caught by wicketkeeper Matt Prior to end a superbly constructed innings of more than seven-and-a-half hours.

Cook’s innovation was eventually rewarded when Prasanna Jayawardene played a genuine glance off Plunkett, only for Ian Bell at leg-slip to hold a sharp chance.

Nuwan Kulasekara was then caught behind off a full-length delivery from debutant paceman Chris Jordan.