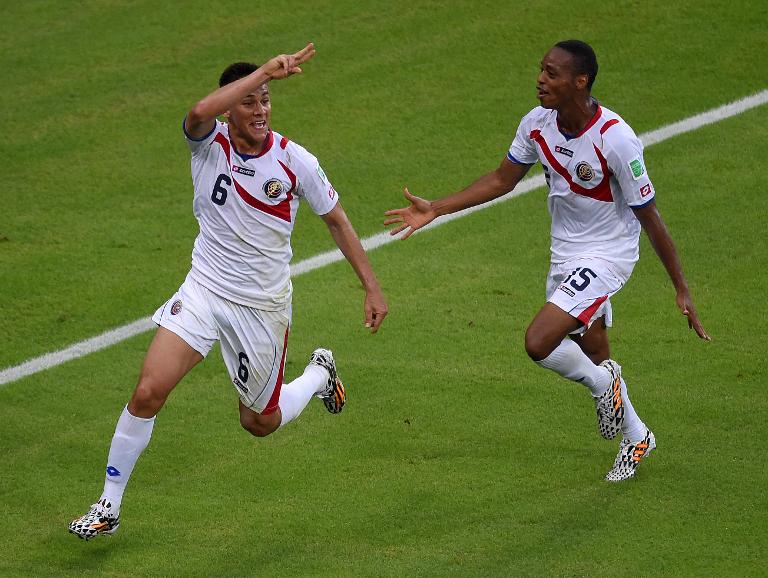 Uruguay, fourth-place finishers in South Africa in 2010, were expected to battle Italy and England for the two qualifying places from Group D into the last 16. That has now been made more difficult.

Edinson Cavani gave Oscar Tabarez’s side a first-half lead from the penalty spot. But Uruguay fell apart in the second half when Joel Campbell slammed in a shot and Oscar Duarte’s header gave Costa Rica a 2-1 lead.

Six minutes from the final whistle, Uruguay’s defence slipped up again. Marcos Urena was allowed to run in and place the ball under goalkeeper Fernando Muslera.

“He’s a man who unsettles you, he surprises, changes the tempo, he was uncontainable for the Uruguay defence,” said Pinto.

Tabarez refused to rule out his side’s chances of progressing but admitted they face a struggle.

“That was a very tough defeat but not because we couldn’t afford to lose,” he said.

“Things are more difficult now than they were at the beginning but we have to defend the prestige we’ve won over the last few years.”

Tabarez left Suarez on the bench in a bid to give the Liverpool striker more time following an operation to repair a damaged meniscus in his left knee just three weeks ago.

Diego Forlan, 35, started alongside Paris Saint Germain striker Cavani and when he nodded Cristian Rodriguez’s cross into the path of Diego Godin, the Atletico Madrid defender beat goalkeeper Keylor Navas from close range, only to be ruled offside.

Cavani mistimed a volley minutes later but the south Americans built momentum and in the 23rd minute, the referee pointed to the spot after skipper Diego Lugano was manhandled from behind by Junior Diaz as a probing cross came into the area.

Navas guessed right, but the Costa Rican goalkeeper was not quick enough to stop Cavani’s spot-kick from squeezing inside his left-hand post.

Uruguay survived a scare when the ball fell to Giancarlo Gonzalez after a free kick whipped in, but the defender’s side-footed shot was deflected out of play.

Costa Rica came close again when a corner sped in from the left, Godin blocked Muslera and the ball sailed just past the head of Fulham striker Bryan Ruiz.

Forlan then had Navas scrambling back towards his goalline as a deflected shot from the striker crept dangerously towards the top corner of the keeper’s net.

Uruguay survived another scare minutes after the restart with Muslera scrambling to his near post to stop Duarte’s header after another free kick from Christian Bolanos caught the Uruguayan defence unawares.

Costa Rica edged closer and when a dummy run into the area drew two defenders Arsenal forward Campbell latched onto a cut back from the byline to slam an angled drive past Muslera from just inside the area.

Three minutes later Duarte stunned Uruguay when he ran in to beat Christian Stuani to another free kick whipped in from distance, beating Muslera with a diving header from a tight angle.

Replays suggested Duarte may have been inches offside, but there was no doubt Costa Rica had taken control.

Suarez briefly warmed up on the touchline in what could have been an attempt to scare Costa Rica. But the underdogs were not intimidated.

Campbell was soon given space to unleash a drive from nearly 30 metres that inched just wide of Muslera’s upright.

Six minutes from time, a superb defence-splitting pass from Campbell found Urena who ran in virtually unchallenged to roll the ball under the advancing Muslera from a tight angle.

Uruguay pushed hard to reduce the arrears, but tempers flared in the closing minutes when Maxi Pereira was sent off for upending Campbell near the corner flag.