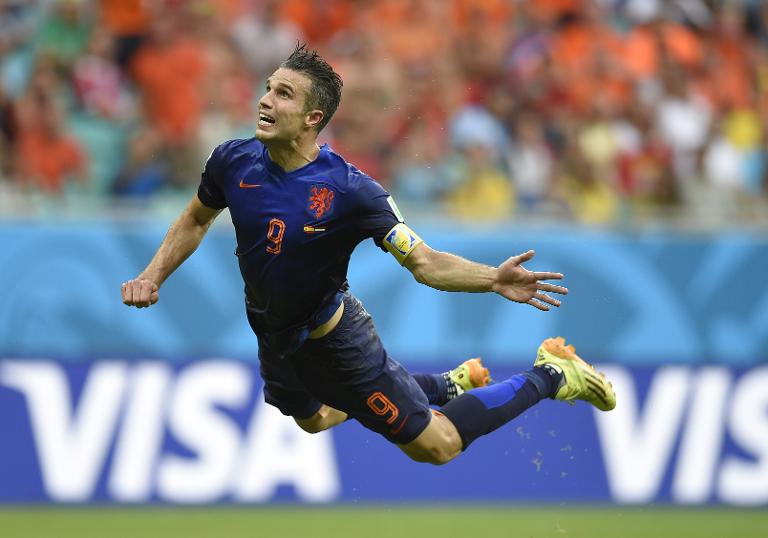 Robin van Persie and Arjen Robben both scored twice as the Netherlands avenged their 2010 World Cup final defeat by routing holders Spain 5-1 on Friday in a record-breaking humiliation.

As well as it being the worst ever-mauling inflicted at a World Cup on the reigning champions, it was the worst defeat suffered by Spain in more than half a century, coming 51 years after a 6-2 defeat to Scotland in 1963.

“We never stopped going and in my opinion it could have been six, seven or eight goals,” said man-of-the-match Van Persie.

“But I’ve been here before, this is my fifth tournament and it’s just one win and three points, now we have to focus on our next game, against Australia.”

Veteran midfielder Xabi Alonso gave the Spanish a first-half lead when he drilled home a highly contentious penalty after Brazilian-born striker Diego Costa, who was jeered constantly by local fans, went down in the box despite not appearing to have been touched.

But Van Persie’s diving header 90 seconds from the break put the Dutch level before the Oranje ran wild in the second half.

The Dutch triumvirate of Robben, Van Persie and Wesley Sneijder caused the Spanish defence all manner of problems, but it was Daley Blind’s superb long passes which created their two opening goals.

Spain conceded two goals at the last World Cup and three in their qualifying campaign for Brazil 2014, leaving Del Bosque at a loss to explain the five-goal mauling.

“I can’t find the words to explain that, we are normally solid in defence, but today we were very weak,” said Del Bosque.

“You have to acknowledge the performances of Van Persie and Robben.”

Soon after, David Silva squandered a great chance to put the world champions 2-0 up when Cillessen managed to get a glove to the Manchester City star’s chipped shot.

Van Persie levelled on 44 minutes when Daley Blind’s pin-point pass from the left wing found the Manchester United star in space to loop his header over the stranded Iker Casillas.

Holland took control soon after the break when Van Persie turned provider with a superb pass to Robben in the area.

The winger got the better of both Spain centre-backs Gerard Pique and Sergio Ramos to fire the Oranje into a 2-1 lead on 53 minutes.

Van Persie then rattled the crossbar with an hour gone before De Vrij grabbed Holland’s third on 64 minutes when he bundled home at the back post.

Spain looked to have pulled a goal back when Silva stabbed home a Cillessen spill with 67 minutes gone, but he was shown to be offside.

Van Persie claimed his second and the Netherlands’ fourth when he beat Casillas to a loose ball and, aided by a helpful bounce, he tapped home on 72 minutes.

The Dutch delight was clear as Van Persie handed the captain’s armband to Robben in the dying stages when the striker was replaced.

Robben, who could have finished with a hat-trick, netted his second on 80 minutes by again dancing around Spanish defenders to claim his team’s fifth goal of a stunning night.

“Without a shadow of a doubt we can (improve),” said the future Manchester United manager.

“You could see in the last 20 minutes when we started to play the ball around with confidence.

“A result like that gives players confidence and I expect us to play better.”