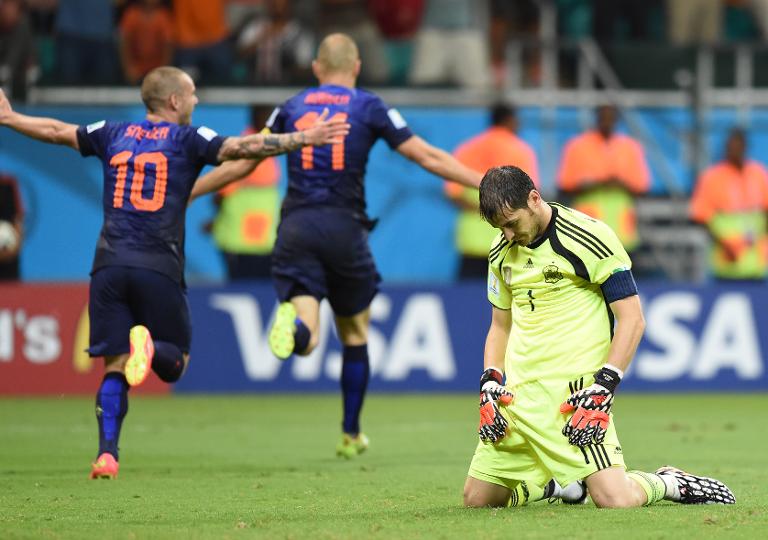 The 32-year-old was clearly at fault for the Netherlandsâ€™ fourth goal, slotted home by Robin Van Persie, and was earlier booked for his protests after claiming he had been fouled by the Manchester United striker as he flapped to allow Stefan de Vrij to make it 3-1.

The Real Madrid stopper has endured the most difficult 18 month stretch of his illustrious career.

Dropped by Jose Mourinho in his final season in charge at the Santiago Bernabeu, Casillas failed to reclaim his place ahead of Diego Lopez in La Liga this season even once Carlo Ancelotti had replaced the self-proclaimed “Special One.”

Yet, Casillas did play in both the Copa del Rey and Champions League and ended the club season on a high by lifting Real’s 10th European Cup, a feeling he described as even greater than winning the World Cup.

His chances of winning more silverware come July 13 now seem remote, though, as Casillas was beaten more times in a rampant 46 minutes from the Dutch than he had been in his previous two major tournaments.

Spain will now almost certainly need to win both their remaining games against Chile and Australia just to set up a likely meeting with Brazil in the last 16.

“I am the first one to ask for forgiveness,” he admitted.

“It wasn’t my best game by a long way because I wasn’t up to the task required and I have to know how to face this type of situation.

Yet, so out of character was his performance that there may not even be a next game for Casillas.

“If I play or left on the bench the manager will decide. All I can do is train well,” he added.

Del Bosque has always been fiercely loyal to those that have succeeded at previous tournaments, including Casillas at last year’s Confederations Cup despite the fact he hadn’t played a competitive game with Real for six months.

Yet, the manner in which the Dutch ripped apart the Spanish methodology for that glorious six-year run in just one half of football could force Del Bosque into taking big decisions.

Particularly since the former Real boss took charge following the first Euro success in 2008, Spain’s game has been based on control of the ball and not conceding.

They have kept 10 consecutive clean sheets in knockout games and, when they most needed him, Casillas has always proved the security blanket.

In 2008 he saved two Italian penalties as Spain finally overcame their run of falling at the quarter-final stage on their way to a first tournament win in 44 years.

He made a fine stop with his outstretched foot two years later to prevent Arjen Robben winning the World Cup for the Dutch and was a hero in another penalty shootout in 2012 at the Euros to deny Portugal in the semi-finals.

On Friday, Robben got his revenge as he also bagged a brace and as Casillas sunk to his knees following the fifth goal, the image of a golden Spanish generation on its last legs was defined.