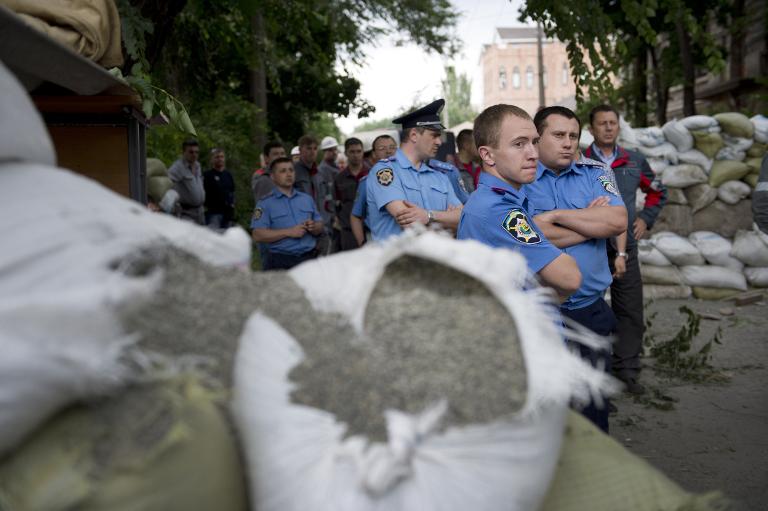 Pro-Russian separatists shot down a Ukrainian military transport plane near the eastern city of Lugansk, killing troops on board, the defence ministry said Saturday as the United States accused Russia of sending tanks and rocket launchers to the pro-Moscow rebels.

“The terrorists cynically and treacherously fired with a large-calibre machinegun hitting an Ilyushin-76 of the Ukrainian air force which was carrying troops on rotation and was about to land at Lugansk airport,” the ministry said in a statement.

The ministry offered its condolences to the families of the “killed soldiers”, but did not say how many died.

Lugansk, which is close to the Russian border, is the main city of one of two eastern regions hit by pro-Moscow separatist violence and which has declared its independence from Kiev.

An “anti-terrorist” clampdown by Ukrainian armed forces has left at least 270 people dead over the past two months.

The attack came less than a week after the rebels fighting Ukraine’s Western-backed government launched attacks on Lugansk International Airport.

The assaults, which took place Saturday evening and Sunday morning in the immediate wake of the inauguration of Ukraine’s new President Petro Poroshenko, did not result in any injuries among the defenders.

But one of the Ukrainian paratroopers guarding the airport told AFP at the time it was clear the rebels were trying to destroy the building which controls the power supply to the airport.

The United States on Friday accused Russia of sending tanks and rocket launchers to pro-Moscow rebels in Ukraine as Kiev’s resurgent forces hoisted the national flag over a strategic rebel-held port amid fears of possible Russian gas cuts.

Poroshenko told his Russian counterpart Vladimir Putin that the tanks’ crossing into the former Soviet republic’s separatist east was “unacceptable”.

The United States has “information that Russia has accumulated tanks of a type no longer used by Russian forces at a deployment site in southwest Russia, and some of these tanks recently departed,” State Department deputy spokeswoman Marie Harf said Friday.

“We are confident that these tanks came from Russia,” she added, noting that no Ukrainian tank units have been operating in the area.

Earlier, she told reporters that a convoy of three T-64 tanks, several BM-21 or Grad multiple rocket launchers and other military vehicles had “crossed from Russia into Ukraine”.

Internet videos had shown the same types of tanks moving through multiple cities in eastern Ukraine, including Snizhne, Torez and Makiyivka, Harf said.

The same types of rocket launcher were seen travelling through Lugansk.

NATO chief Anders Fogh Rasmussen warned that reports of pro-Russian groups acquiring heavy weapons from Russia, including tanks, would mark a “serious escalation” of the crisis if confirmed.

Poroshenko celebrated the “heroism” of soldiers hoisting the national flag over the strategic rebel-held port of Mariupol.

He proclaimed the industrial Sea of Azov city the new temporary capital of Donetsk — an eastern rustbelt region overrun by pro-Russian gunmen for the past two months.

Mariupol has wavered between rebel and Kiev control for weeks and was also the scene of pitched battles on May 9 that killed more than a dozen people.

The bustling port of half a million people provides access to the main highway linking other regions with Russia and is the main export channel for coal and industrial products fundamental to Ukraine’s economic growth.

But the prosecutor’s office also confirmed that three soldiers died late Thursday when they were ambushed by the militia in the Donetsk region town of Stepanivka.

His deputy told reporters that 30 pro-Russian gunmen had been captured in a coordinated push involving special forces that saw rebels driven from the city’s seat of power they had reoccupied about a month ago.

Poroshenko’s troubles have been compounded by the threat of Ukraine being cut off from economically-vital Russian gas shipments as early as Monday morning because of a bitter price dispute.

Prime Minister Arseniy Yatsenyuk told regional administrations and the heads of the state energy company to prepare for the consequences of a possible gas cut by implementing a plan for reduced energy use.

Ukraine receives half its gas supplies from Russia and transports 15 percent of the fuel consumed in Europe.

The head of Ukraine’s state energy firm said Kiev was ready to make a $1.95-billion (1.45-billion-euro) payment demanded by Moscow by Monday if Russia settled on a price of $326 per 1,000 cubic metres of gas.

European Commission chief Jose Manuel Barroso meanwhile told the Russian leader he was willing to include Moscow in discussions with Kiev weeks before the EU is due to sign an association accord and free trade pact with the former Soviet state.