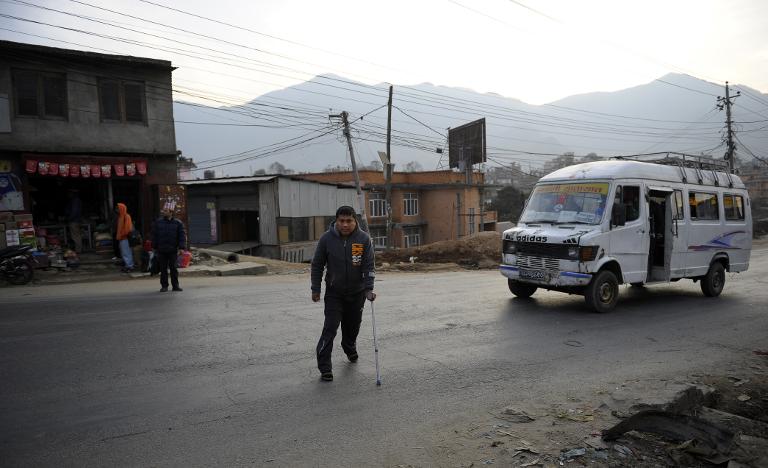 A broken leg, a metal crutch and piles of paper testifying to his fight for justice: all reminders of Bhupendra Malla’s stint working for a Qatari construction firm, ahead of the 2022 World Cup.

As the 32-nation tournament gets under way in Brazil, the oil-rich emirate of Qatar has come under fire for allegedly bribing officials to secure 2022 hosting rights and over the abusive conditions endured by migrant workers like Malla.

Three years ago, Malla was desperate to leave his village in central Nepal.

Drowning in debt after a failed attempt to open a shop, the prospect of a job in the Gulf state that would clear his loans and fund the education of his three children seemed like his only way out.

“I could barely make ends meet, my father was a farmer but farming doesn’t pay and I needed to find another way to feed my family,” Malla told AFP in Kathmandu.

Like hundreds of others who leave the Himalayan nation every day in search of jobs, Malla headed for Qatar, where demand for labour has skyrocketed in the run-up to the World Cup.

The shock decision to award the hosting rights to the tiny Gulf state triggered a massive construction boom and an exodus of Nepalese migrant workers to cope with the upsurge in related infrastructure projects.

The 32-year-old says he was one of a dozen men housed in a room measuring four by four metres (12 by 12 feet) and was paid no wages during his first four months in the country, sending him deeper into debt.

But his nightmare had only just begun.

A month later, he nearly died when his legs were crushed in a workplace accident. After six operations, his employers refused to pay any compensation and confiscated his passport, unless he agreed to leave the country on their terms.

Malla took them to court, representing himself since he couldn’t afford a lawyer.

“I had a family to feed, I needed money, so I fought for two and a half years. During that time, I sometimes felt that I would just rot and die there,” he said.

The court ruled in his favour: he secured $33,000 in damages, got his passport back and a one-way ticket home to Kathmandu.

Malla’s victory against his employers was a rare silver lining in a tale tainted by tragedy. Campaigners say many migrants in Qatar endure brutal conditions, with no relief in sight.

“They have to work 18-19 hours a day and then they do not get proper food, proper accommodation… and because of this fact their health goes down”, said Yubraj Nepal of the Kathmandu-based migrant rights group, Pravasi Nepali Co-ordination Committee.

Some pay the ultimate price, returning home in coffins, with documents listing “cardiac arrest” as the leading cause of death.

According to government data at least 360 Nepalese workers have died in Qatar in the last two years.

The International Trade Union Confederation (ITUC) warned this month that as many as 4,000 migrant workers might be killed by the time the 2022 tournament kicks off.

But the spiralling figures have done little to dissuade others from seeking employment in the booming Gulf nation.

Scores of men line up every morning outside the Department of Foreign Employment in Kathmandu, waiting for work permits.

Many, like Lal Bahadur Sunar, work in Qatar and say they have little alternative.

“We have no choice, we have to go overseas. We can’t get good jobs, good money here,” Sunar told AFP.

Nepal’s government says it wants to resolve the problem but argues it can’t do much on its own.

“At the ground level, the responsibility lies with the local recruiting agency here and the employer over there,” Rabindra Mohan Bhattarai, former Director-General of the Department of Foreign Employment, told AFP.

Since returning to Nepal, former migrant worker Malla hasn’t been able to find a job but says nothing could persuade him to return to Qatar.

“When I was stuck there, I thought I would die without seeing my wife’s and kids’ faces again… unless Qatar treats workers better I don’t think the World Cup should be held there”.