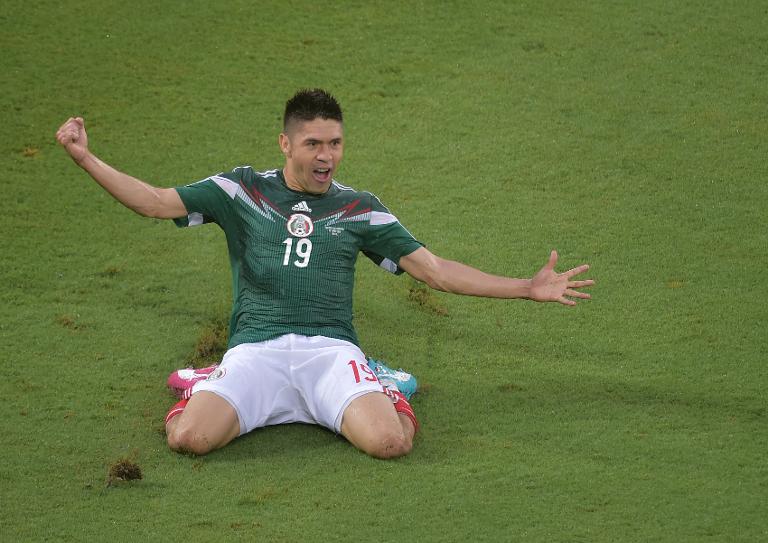 Oribe Peralta scored a second-half winner in a 1-0 victory over Cameroon in rain-lashed Natal on Friday in a match which once again raised questions over the standard of refereeing at the World Cup.

Miguel Herrera’s Mexico side dominated throughout but went in for the half-time break feeling aggrieved after seeing what looked like two perfectly valid goals chalked off for offside.

Those decisions did little to appease a Mexican media which cried foul after seeing Group A opponents Brazil awarded a questionable penalty in a 3-1 win over Croatia on Thursday.

The possibility of yet another refereeing blunder appeared to have crossed the mind of Herrera, who said afterwards: “I told the boys before the match to keep their focus on our gameplan, whatever happens.

“Human error exists. We have to learn to put up with whatever comes our way. We didn’t think about the referee when we went back to dressing room (at half-time).

“Concentration is essential and the lads did well to keep their composure.”

Volker Finke, the German coach of a Cameroon side whose pre-World Cup was marred by a bitter row over bonuses, refused to use the “difficult” playing conditions as an excuse.

But after sidestepping the issue of refereeing decisions, he admitted Cameroon’s next encounter, against hosts Croatia, will be decisive.

“The conditions weren’t an excuse for our performance,” said Finke, who admitted Cameroon, relatively late arrivals in Brazil, had found Mexico’s 5-3-2 system a tough nut to crack.

“We had some problems through the middle of midfield in the first 20 minutes or so, but we eventually adapted. The second half we were better, but overall we’re disappointed.

“We had a few chances to score, and didn’t. They had goals ruled out, but that’s the way it is. Now we’ve got five days before our next match, which will already be decisive for our World Cup.”

After a cagey start at a sodden Estadio das Dunas, Giovani Dos Santos appeared to have opened Mexico’s account when he first-timed Miguel Layun’s delivery past Cameroon ‘keeper Charles Itandje inside the quarter hour.

– Ruled out for offside –

But despite replays showing the Villarreal striker to be onside, the goal was chalked off by Colombian referee Wilmar Roldan.

Mexico, however, remained a constant threat and had the ball in the net for a second time when Dos Santos flashed a header past Itandje at the back post following a corner, although it too was waved off by Roldan.

Finke replaced defender Cedric Djeugoue with Dany Nounkeu for the start of the second half, but the African side were soon under pressure.

Quickly, Itandje was forced to block from Peralta as the Santos Laguna striker jumped on to Dos Santos’s smart dink.

And although Choupo-Moting, with a deflected shot, and Assou-Ekotto, with a curling free-kick, came close Mexico went in front just after the hour.

Dos Santos saw his low drive parried by Itandje and into the path of Peralta, who drove home from 10 metres out to send the largely Mexican crowd of 39,216 into raptures.

A chorus of ‘Ole’ began to ring around the stadium as the Mexicans took control, and in the final 10 minutes Hernandez chased deep in Cameroonian territory to cut back for Fabian, who was blocked by a defender.

Cameroon came close twice in the dying minutes when Benjamin Moukandjo’s drive across goal was blocked by an alert Rodriguez and then Ochoa pulled off a spectacular dive to parry Moukandjo’s header from Assou-Ekotto’s delivery.

However Mexico almost made it two at the death when Layun dispossessed a Cameroon defender to deliver for Hernandez, who volleyed just over.