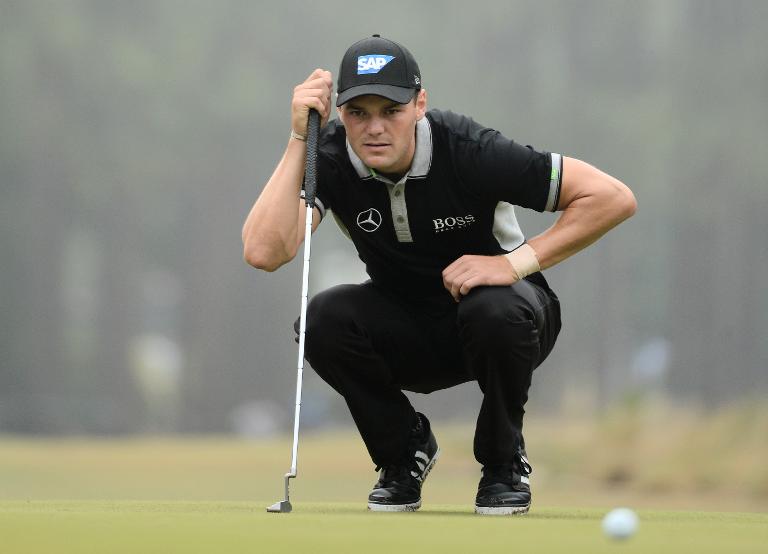 The 29-year-old German’s bogey-free day left him on 10-under par 130, matching the best 36-hole start in major golf history.

Kaymer erased the old 36-hole Open mark of 131 set by Rory McIlroy in 2011 on his way to winning his first major title at Congressional.

No player in major golf history had ever gone as low as 65 in each of the first two rounds.

“Somebody has to do it at one stage,” Kaymer said. “You need to play very solid and you need a little bit of luck here or there.”

The only prior players to score 130 in the first two rounds of a major were England’s Nick Faldo and American Brandt Snedeker, who each opened on 66 and followed with 64 at the British Open, Faldo in 1992 at Muirfield and Snedeker at Lytham in 2012.

“It’s just very satisfying,” Kaymer said. “The way I worked my way around the course, I hit some smart shots and didn’t play too aggressive. I didn’t make many mistakes.”

Kaymer’s six-shot edge on second-place American Brendon Todd matched the largest 36-hole lead in US Open history — those enjoyed by Tiger Woods on his way to victory at Pebble Beach in 2000 and by McIlroy in 2011.

“Martin played exceptionally well,” Todd said. “If he comes back to us, great. If he shoots 10-under again in the next two days, then he’s superhuman.”

“It’s going to be tough to catch him,” Na said. “It’s unbelievable what he’s done. It’s amazing. He looks flawless.”

Kaymer, the 2010 PGA Championship winner, is coming off a Players Championship victory last month that ended a three-year PGA win drought and bolstered his confidence even before he shot the low round both days, another US Open first, and threatened to become just the seventh wire-to-wire Open winner.

Kaymer, who began at the par-5 10th hole, opened with a six-foot birdie putt, added a 20-foot birdie putt at 13 plus a 25-footer at 16 and four-foot birdie putts at the third and fifth and a key par save at seven, the lone hole where he made bogey on day one.

“He’s as dialed in as I’ve seen,” said Bradley. “He’s steady and doesn’t seem to get too down. That’s a good combination for a US Open.”

Kaymer is far from complacent, aware that difficult conditions are a trademark of US Opens and disaster could lurk over the last two rounds.

“It’s not a done deal,” Kaymer said. “You don’t approach Saturday and Sunday in a relaxed way. On Sunday afternoon when you lift the trophy you can relax. You have to keep playing well.”

Reigning British Open champion Phil Mickelson, a six-time US Open runner-up seeking a victory to complete a career grand slam, struggled to a 73 to share 33rd, 13 strokes back.

“I feel like I’m playing well enough to win the US Open, except for putting,” he said. “After I’ve 3-putted three or four times, I lose my focus on the other stuff. It really affects my ability to concentrate and my momentum and energy. It’s a frustrating time.”

Mickelson resumed his regular putting grip after a one-day claw grip experiment, saying, “I don’t feel like the stroke is bad but I’m just not dialed in. I’m just not making them.”

Two-time major winner McIlroy and Masters runner-up Jordan Spieth were among those on 139, with world number one Adam Scott and Japan’s Hideki Matsuyama 10 off Kaymer’s pace.

“Potentially, he goes out tomorrow and plays better than everyone again and this thing’s over,” Scott said. “If he does it for two more days, then we’re all playing for second spot.

“I’m going to have to play a couple of exceptional rounds to have a chance.”

Defending champion Justin Rose and Aussie Jason Day were on 141.

“I think 10-under is unbelievable golf,” Rose said. “He has been strong under pressure.”

Kaymer has four wins and two runner-up efforts in seven events he has led after 36 holes.

It won’t be reigning Masters champion Bubba Watson, who missed the cut on 146.