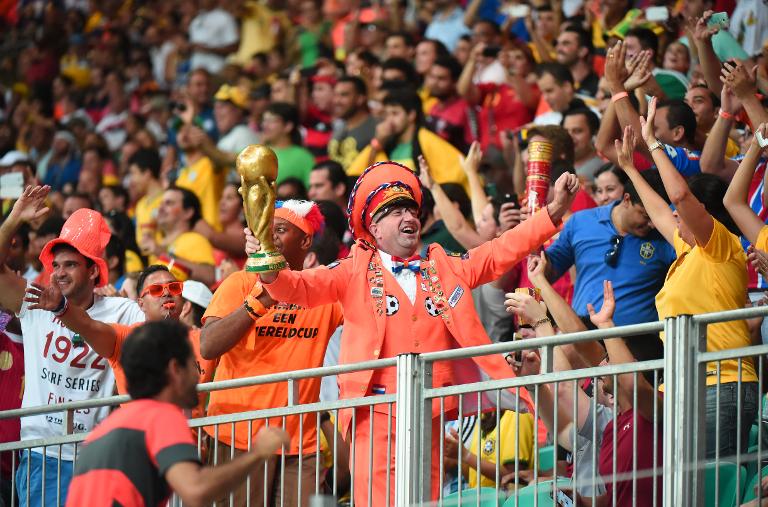 Spain’s domination of world football, which has seen them win three trophies in the past six years, could be at an end after their hopes of retaining the World Cup took a huge knock when the Netherlands inflicted their worst defeat in 51 years.

Robin van Persie and Arjen Robben each scored twice as a rampant Netherlands humiliated Spain in a 5-1 trouncing in their opening group game, a rerun of the 2010 World Cup final.

It was the heaviest defeat suffered by any defending champions at a finals and the Spanish press did not refrain from slamming a side they have had the habit of eulogising over for the past six years.

“Spain is like the remains of an empire that knows it is near its end,” mused a columnist in the Barcelona-based daily Sport.

A jubilant van Persie, who scored one of the best goals seen at the World Cup, said it was one of greatest football nights for the Netherlands.

Spanish goalkeeper and captain Iker Casillas took the blame for what he called his worst night.

Spain’s hopes of rescuing their campaign and avoiding the fates of France in 2002 and Italy in 2010 in defending champions going out at the group stage, face a real challenge from highly-rated Chile.

The South Americans joined the Dutch on three points after beating a stubborn Australia side 3-1.

Mexico beat Cameroon 1-0 in Group A, but claimed they should have had two more on the scoresheet as referees’ decisions again inflamed the World Cup debate.

Van Persie made an incredible dive to send a looping header over Casillas to level the game just before half-time.

“We didn’t react well to van Persie’s second goal — they were euphoric and they hammered us,” said Spain coach Vicente del Bosque.

“We did everything wrong in the second half, it was a debacle,” added Spain’s veteran midfielder Xavi.

It was a personal humiliation for Casillas, 33, one of the stars of the team that won the 2008 and 2012 European Championships and 2010 World Cup.

“I have to ask forgiveness for the match we played in general and me in particular,” he said. “I was not good enough.”

Even van Persie was shocked by the scale of the defeat.

It was the “greatest” night for Dutch football, he added.

The walloping of Spain eclipsed more refereeing controversies on the second day of competition.

Referees chief Massimo Busacca insisted Nishimura had been justified in awarding the spot-kick after an alleged foul by Dejan Lovren on Brazilian striker Fred.

“He had a very good position,” said Busacca, referring to a photo of the incident which appeared to show Lovren’s hands making contact with Fred.

“When he saw the hands doing something he makes it (the decision).”

But no sooner had Busacca sprung to Nishimura’s defence than officiating was again under scrutiny as Mexico took on Cameroon.

Mexico’s Oribe Peralta scored the only goal of a rain-lashed Group A game in Natal, securing a precious three points for Miguel Herrera’s side.

But the main talking point after the game was Colombian referee Wilmar Roldan, who chalked off what looked like two valid Mexico goals in the first half.

“The referee has taken two goals off us but we go away with three points and in top spirits,” Mexico coach Miguel Herrera said.

In Friday’s late game, Chile beat Australia 3-1 and ensured they will not be taken lightly by either Spain or the Dutch.

Alexis Sanchez and Jorge Valdivia struck early in the first half before Australian veteran Tim Cahill led a stirring fightback from the Socceroos.

Cahill scored with a majestic header to make it 2-1 but Jean Beausejour grabbed a third for Chile to make the game safe for the South Americans late on.

Elsewhere Friday, the pitch in the Amazon city of Manaus due to host its first World Cup match when England play Italy on Saturday is not up to the required standard, according to world players union FIFPro.

There are large dry areas on the pitch and some of it has been spray-painted green.

In Saturday’s other action, veteran coach Ottmar Hitzfeld’s final campaign gets underway as his talented young Swiss side play Ecuador while Japan play Ivory Coast and Colombia, who will be watched from the stands by injured talismanic striker Radamel Falcao, play Greece.