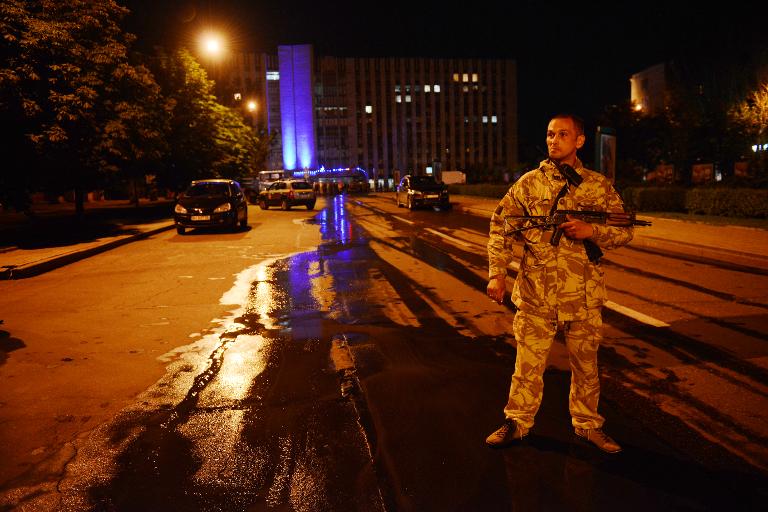 Ukraine’s new president told his Russian counterpart the reported crossing of three tanks into his country’s separatist east was “unacceptable”, as the pair held what Kiev called “substantive and extended” telephone talks.

President Petro Poroshenko also discussed his plans to defuse the crisis in the east of the country as he held what are thought to be his first telephone talks with Russia’s Vladimir Putin since he was sworn in at the weekend.

“Poroshenko called the situation unacceptable,” the president’s spokesman said on his Facebook page, referring to reports that three Soviet-era tanks had moved into Ukrainian territory from Russia.

Moscow has denied the allegation, earlier raised by Ukraine’s Interior Minister Arsen Avakov, who stopped short of accusing Russia of being behind the reported incursion.

Russia for its part accused Poroshenko of failing to follow through on his presidential election promise to end the violence, and demanded an investigation into claims that his forces had used banned firebombs against civilians.

Putin and Poroshenko shook hands on the sidelines of D-Day commemorations in France on June 6, but relations between their two countries remain tense.

On Wednesday the two sides failed to calm a furious row over gas prices that could see Ukraine and parts of Europe cut off from Russian supplies next week.

And on Thursday, Russia’s UN ambassador Vitaly Churkin promised to submit a draft resolution to the UN Security Council demanding an immediate end to Ukraine’s military campaign in the east and fulfilment of a settlement “road map” approved by the Organisation for Security and Cooperation in Europe.

Poroshenko faces a vast challenge as he tries to use the momentum of his convincing May 25 election victory to overcome Ukraine’s gravest crisis since its independence from Moscow in 1991.

The 48-year-old chocolate baron is trying to keep the future of his splintered and nearly bankrupt country tied to Europe while at the same time not provoking the Kremlin — already in control of the Crimea peninsula — into any more aggressive moves.

Poroshenko made a surprise promise on Sunday to end by the weekend two months of fighting that has now claimed 270 lives and threatened his country’s very survival by the end of the week.

His aides and a top Kremlin envoy have since had daily consultations in Kiev that on Thursday produced what Ukraine said was an initial “peace plan” now requiring Putin’s formal support.

The Ukrainian leader’s office said he laid out the details of that proposal to Putin and later also consulted German Chancellor Angela Merkel by phone.

The Kremlin’s brief account of the talks provided no clue into what Putin may have said in response.

There was however little sign of the violence abating.

A minibus belonging to rebel leader Denis Pushilin in the separatist eastern city of Donetsk was blown up killing two of his entourage and wounding two other people, the government of the self-proclaimed “Donetsk People’s Republic” said. Pushilin was not in the vehicle.

Poroshenko has hinted that he is ready to meet separatist leaders who have laid down their arms.

But the militants have shown no sign of abandoning their drive to have the economically vital industrial belt — home to nearly seven million mostly Russian speakers — come under Kremlin control.

And Russia indicated that its patience with Poroshenko’s promises was wearing thin.

“The lack of any progress whatsoever in efforts to stop the violence and halt military operations… is causing increasing concern,” Foreign Minister Sergei Lavrov told reporters.

He pointed to Russian media claims of Ukrainian forces using incendiary bombs — designed to set off fires and used widely during the Vietnam War before being banned by the United Nations — charges Ukraine’s military dismissed as “absurd”.

The tense exchanges between Kiev and Moscow have been fuelled in part by the lack of any progress in a high-stakes “gas war”.

The dispute — a nagging presence for most of the past two decades — flared up again when Moscow nearly doubled Kiev’s rates in the wake of the February ouster of Ukraine’s Russian-backed president.

Ukraine receives half of its gas supplies from Russia and transports 15 percent of the fuel consumed in Europe.

The latest round of EU-mediated talks broke up on Wednesday in Brussels with Ukraine calling Putin’s offer to lower Kiev’s fuel price by more than 20 percent a “trap”.

But Gazprom head Alexei Miller said on Thursday that Russia had already twice postponed its payments deadline and would really halt supplies should Ukraine fail to come through with $1.95 billion (1.45 billion euros) “by Monday at 10 o’clock in the morning.”