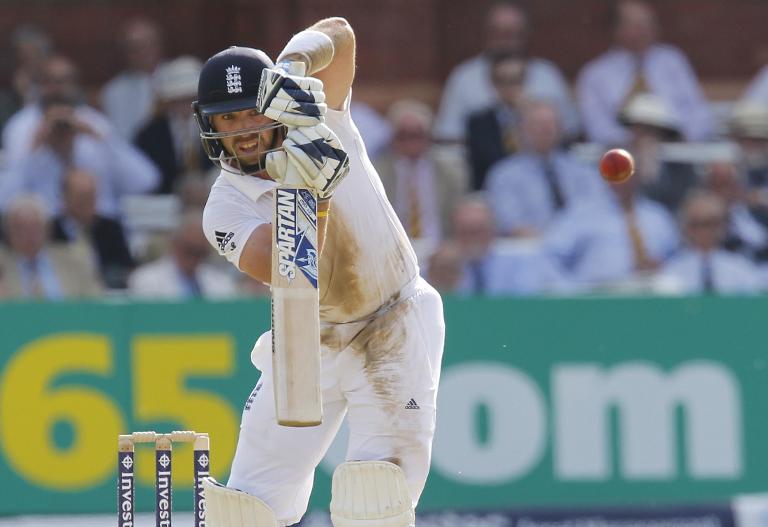 Joe Root’s second hundred in as many Lord’s Tests was the cornerstone of England’s recovery on the first day of their series opener with Sri Lanka on Thursday.

Root’s 102 not out helped take England to 344 for five at stumps on the first day of the first Test after they’d been struggling at 74 for three when the 23-year-old Yorkshireman walked out to bat.

Root, who made a Test-best 180 against Australia at Lord’s last year, was well supported by Matt Prior (76 not out) in a so-far unbroken sixth-wicket stand of 135.

However, recalled wicketkeeper Prior was fortunate not be out for a second-ball duck before completing just his second 50 in 21 Test innings.

Moeen Ali (48), one of three debutants in a new-look England side following their 5-0 Ashes drubbing in Australia, had previously helped Root steady the ship during a fifth-wicket stand of 89.

“It was a day when you had to scrap,” he added after batting for more than five hours.

“Nothing beats Test cricket in my eyes and the challenge of trying to score runs in the first Test of the summer after the winter we had was one I relished.”

Before this match, Australia great Shane Warne said England ought to have given a debut to Jos Buttler and left Prior out.

However, Root said he was delighted to have the Sussex gloveman alongside him.

“I love batting with Matty. He’s a great bloke to have in the side and to play how he has is testament to his character and his quality as a player.”

Although sunny blue skies above suggested ideal batting conditions, the pitch was a greener-looking one than usually associated with Lord’s at this time of year.

Mathews’s decision yielded a quick reward as England lost both their openers inside the first half hour.

Australia-born Sam Robson, one of England’s newcomers along with Ali and all-rounder Chris Jordan, fell for one on his Middlesex home ground when drawn forward into edging a full-length Nuwan Pradeep delivery that was well caught by diving wicketkeeper Prasanna Jayawardene.

And 14 for one became 22 for two when England captain Alastair Cook (17) edged a cut off Nuwan Kulasekara into his stumps.

But from then on things got tougher for the tourists as the pitch flattened out.

“I thought in the first few hours we bowled in some good areas,” the former left-arm seamer added.

“I didn’t expect more (than five wickets) because something happened in the wicket in the first few hours.”

England had struggled to 98 for three at lunch, also losing Gary Ballance.

But Bell was unbeaten on 41 and looked in excellent touch in his 99th Test.

After lunch, Bell drove left-arm spinner Rangana Herath for six to go to a 69-ball 50.

But he was out soon afterwards when lbw to Eranga although Sri Lanka first had to review Australian umpire Paul Reiffel’s original not out decision .

Ali began cautiously but the left-hander and Root were both 43 not out at tea.

Root subsequently completed his fifty but Ali fell when he drove loosely at Herath and was caught by Mahela Jayawardene at slip.

Prior, dropped during the Ashes, had still to score on Thursday when struck on the back leg by Herath.

Sri Lanka appealed for lbw but Reiffel ruled in Prior’s favour and, despite a review, the ‘umpire’s call’ stood after replays indicated the ball had pitched fractionally outside off stump.

Prior, who marked his Test debut with a hundred at Lord’s against the West Indies in 2007, reached 50 when he cover-drove Pradeep, bowling with the new ball, for his seventh four.

Root, obliged to be more vigilant, drove Kulasekara down the ground for just his eighth boundary to go to 96 before reaching his third hundred in 16 Tests with three off Herath.