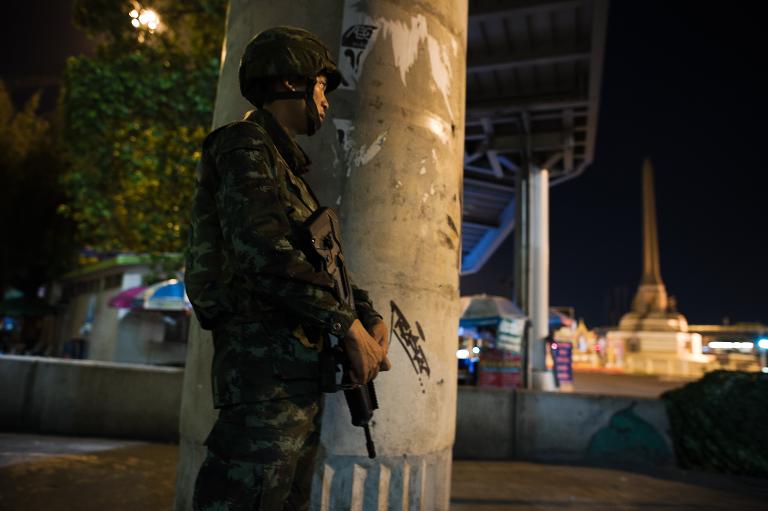 Thailand’s junta on Friday lifted the night-time curfew imposed after their military coup three weeks ago, to the relief of World Cup fans and the struggling tourism industry.

The ending of the midnight-4 am curfew enforced by the ruling generals’ National Council for Peace and Order (NCPO) will allow Thais to watch football’s showpiece tournament in bars and restaurants without fear of arrest.

“As the overall situation in many places has eased and there is no sign of violence, to reduce the impact on people’s livelihoods and to promote tourism the NCPO orders the lifting of the curfew in every area immediately,” a televised announcement said.

But it has also embarked on an extensive public relations campaign emphasising the need to “return happiness” to the people.

On Thursday authorities announced that Thais would be able to watch the whole World Cup on television at home for free, thanks to an intervention by the generals.

The time difference with Brazil meant that most of the World Cup matches would have been played during curfew hours.

In theory, anyone caught out on the streets overnight faced arrest, although in many areas the curfew was not strictly enforced.

The curfew, which was blamed for contributing to a sharp drop in foreign visitor arrivals, had already been lifted in some provinces and major beach resorts.

Under the military’s “happiness” campaign, the public have also been treated to free haircuts, concerts and even a song penned by the usually stern-faced army chief Prayut Chan-O-Cha.

At the same time authorities have cracked down on dissent, arresting anti-coup protesters.

One prominent activist faces up to 14 years in prison if convicted of incitement, computer crimes and ignoring a summons by the junta.

Sombat Boonngamanong, who led a social media campaign to stage peaceful but illegal rallies against the junta, was denied bail Thursday and is set to stand trial in a military court.

He was one of several hundred politicians, activists, academics and journalists summoned by the junta following the May 22 coup.

Those who obeyed the summons were detained in secret locations for up to a week and ordered to cease political activities.

The junta has said elections are not expected to be held for at least a year to allow for political “reforms”, including the drafting of a new constitution.

The army chief did not say whether the cabinet would be made up of civilians or military personnel.

“A new government will be set up in August or the beginning of September,” he told officials at a briefing on the 2015 budget.

“Don’t ask me who they are and where they come from,” he added.

The junta chief has not ruled out becoming prime minister himself.

He urged Thais to “please be patient with me”.

“I know it’s a honeymoon period now but I hope it lasts a bit longer,” he said.

Critics accuse the junta of using political unrest as an excuse for a power grab by a military-backed royalist establishment seeking to curb the political dominance of fugitive former premier Thaksin Shinawatra.

Thaksin or his affiliated parties have won every election in more than a decade, including in 2011 under his younger sister Yingluck Shinawatra, helped by support among voters in the northern half of the country.

The billionaire tycoon-turned-populist politician was ousted in a 2006 coup and lives in Dubai to avoid jail for a corruption conviction.

Prayut said that he would scrap a loss-making rice price guarantee scheme launched by Yingluck, and explore ways to reduce production costs for struggling farmers instead.

Yingluck was ousted as premier shortly before the coup in a controversial court ruling.