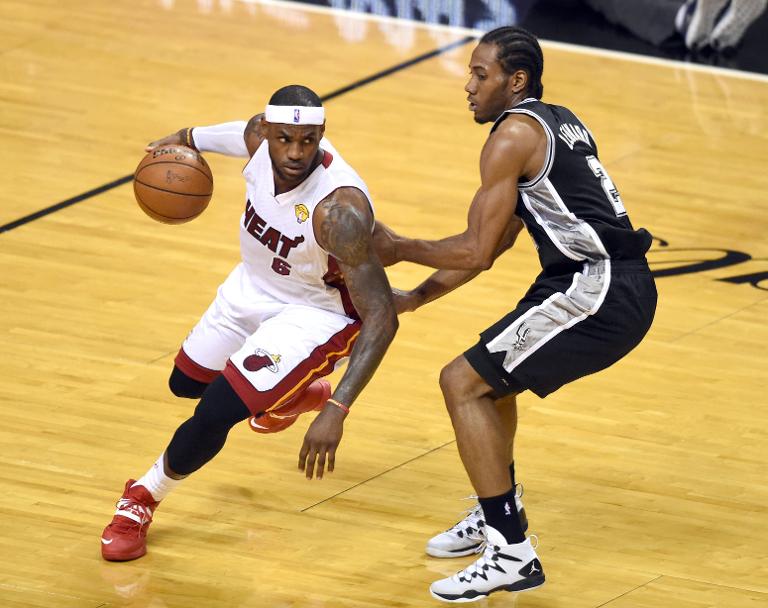 The San Antonio Spurs blitzed Miami for their second straight blowout win of the NBA finals, their 107-86 triumph putting the Spurs on the brink of a fifth title.

Kawhi Leonard scored 20 points Thursday for the top-seeded Spurs, who made the two-time defending champion Heat look helpless at home for the second consecutive game and now have a 3-1 lead in the best-of-seven championship series and a chance to claim the title on Sunday in San Antonio.

“We thought we could win here. We hoped to win two, obviously, but we were happy to win one,” said Spurs forward Tim Duncan. “Then came the second game and we didn’t want to rest.

“We came in here tonight and had great focus, put a great game together and came out with two.”

Tony Parker tallied 19 points while Tim Duncan had 10 points and 11 rebounds for the Spurs, who are seeking redemption after losing to the Heat in seven games in last year’s title series.

This is the first NBA finals rematch since the Chicago Bulls battled the Utah Jazz in 1997 and 1998.

The Spurs set the tone early in game four as nine different players got involved in the scoring en route to a 19-point lead at halftime.

“It is always tough when you have a big lead in the NBA,” said Parker. “I am kind of surprised the way we have been holding those leads.”

The Spurs shot 55 percent in the first half Thursday, and while it wasn’t quite as mind-blowing as the finals record 76 percent they fired in the first half of game three, it staked them to another commanding lead.

But this time there was no letdown in the third quarter from the Spurs. They continued to pour it on, outscoring Miami 26-21 in the third.

It didn’t need to, as the Spurs dominated in every facet of the game Thursday and their bench outscored Miami’s reserves 41-30.

France’s Boris Diaw flirted with a triple-double, finishing with eight points, nine rebounds and nine assists and Australia’s Patty Mills scored 14 points for the Spurs — who also out-rebounded the Heat 44-27.

“He has really changed the game for us, along with rebounding and defending as well as he has,” Duncan said of Diaw. “He hasn’t really scored that much but he has found a way to be really effective.”

LeBron James scored 28 points while Chris Bosh had 12 points for the Heat, who now have to win three straight, including two in San Antonio, to win a third straight title.

– Biggest surprise of the series –

The Miami players gave their fans very little to cheer about, dropping back-to-back playoff games for the first time since the 2012 Eastern Conference finals.

Since then, the Heat had followed 13 playoff game defeats with victories, but they couldn’t keep that streak alive on Thursday.

Miami is trying to become the first team to come back from a 3-1 deficit in the finals.

Dwyane Wade and Mario Chalmers’ shooting woes continued as Wade missed 10 of 13 shots from the field while Chalmers had just four points.

“This was the biggest surprise of the series,” said Heat coach Erik Spoelstra. “Even when we make adjustments they have still been able to stay in a rhythm. They have been able to get into their flow regardless of what scheme we put out there.”

Leonard, who scored a career high 29 points in game three, finished off a thunderous put-back dunk late in the second quarter Thursday to give the Spurs a 22-point lead.

A Spurs’ shot bounced high off the rim and Leonard sailed over the top of Miami’s Bosh for the uncontested slam with 68 seconds left in the second to make it 55-33.