Home World Spain lays out silver won from US treasure-hunters 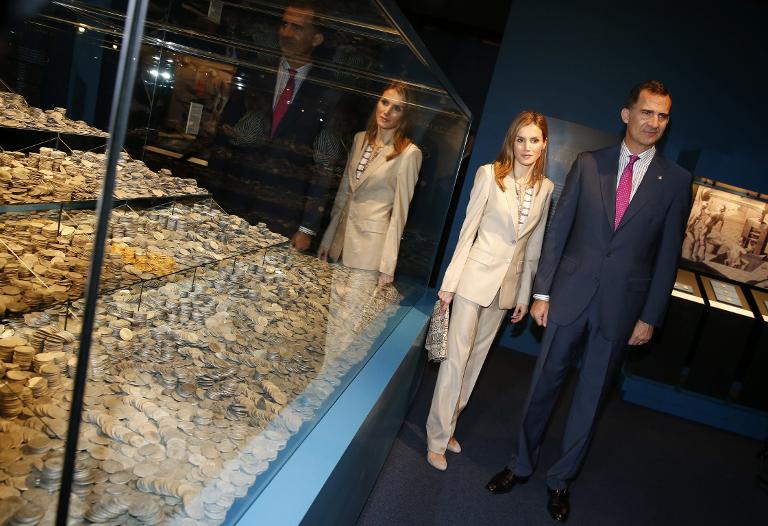 Spain has proudly put on show tens of thousands of silver coins from a 19th-century shipwreck that it won back in court from US treasure hunters.

The country’s soon-to-be king, Felipe, and future queen Letizia on Thursday launched the exhibition in central Madrid celebrating the return of the sunken treasure to Spain.

They viewed treasures and documents that tell the story of how British warships blew up the Nuestra Senora de las Mercedes, sending its precious cargo to the bottom of the sea.

The highlight of the show, in the basement of Madrid’s recently reopened National Archaeological Museum, is a glass case containing heaps of more than 30,000 tarnished silver coins.

The cargo came to Spain in 2012 after a five-year legal battle with Odyssey, the US company that hauled it up two centuries after it sank.

“It’s emotional,” said James Goold, a US lawyer who fought Spain’s case in the courts. “To get it back to Spain says to me: ‘Mission accomplished’.”

On October 5, 1804, the Mercedes was nearing the coast of Spain on its way from Peru, part of the Spanish empire at the time.

Spain and France had signed a peace treaty with Britain in 1802 but that soon broke down.

They fired cannons at the Mercedes, blowing up its powder kegs and sinking it — a moment captured in a contemporary oil painting in the exhibition.

The attack, known as the Battle of Cape Santa Maria, led Spain to declare war on Britain and re-enter the Napoleonic Wars.

In May 2007, deep-sea search specialists Odyssey Marine Exploration found the wreck at a depth of 1,700 feet (518 meters) in the Atlantic.

Spanish authorities said at the time that the trove was worth at least 350 million euros ($474 million) overall. It is thought to be the most valuable sunken treasure discovery in history.

Odyssey challenged Spain’s sovereign claim to the cargo and said the wreck lay in international waters. Peru and descendants of the treasure’s original owners also claimed it.

But a judge in Florida ruled in March 2012 that the trove belonged to Spain. The US Supreme Court turned down a final appeal by Odyssey in May 2012.

Most of those on show have been cleaned and are laid out in a glass case, but some are displayed just as they were found, lumped together with mud.

Some 8,000 other coins from the ship went on show last month at the Museum of Subaquatic Archaeology in the southeastern Spanish city of Cartagena.

A third exhibition also opened on Thursday in Madrid’s Naval Museum, telling the story of the battle and the Mercedes.

More than just a pile of treasure, the winning of the lost cargo was a point of pride for Spain.

One of the organisers of the new exhibition, Manuel Mortari, hoped it would “serve as a precedent and make people aware of the importance of heritage”.

“A big battle has been won,” he told AFP. “It is like winning a World Cup — it raises the country’s self-esteem.”

The future king and queen shook hands with youngsters gathered to greet them at the museum, smiling and chatting with them before going down to view the treasure.

Felipe, 46, is to be sworn in as king on Thursday, replacing his father Juan Carlos, 76, who is abdicating after 38 years on the throne.