Home Sports Pirlo lets his feet do talking for Italy 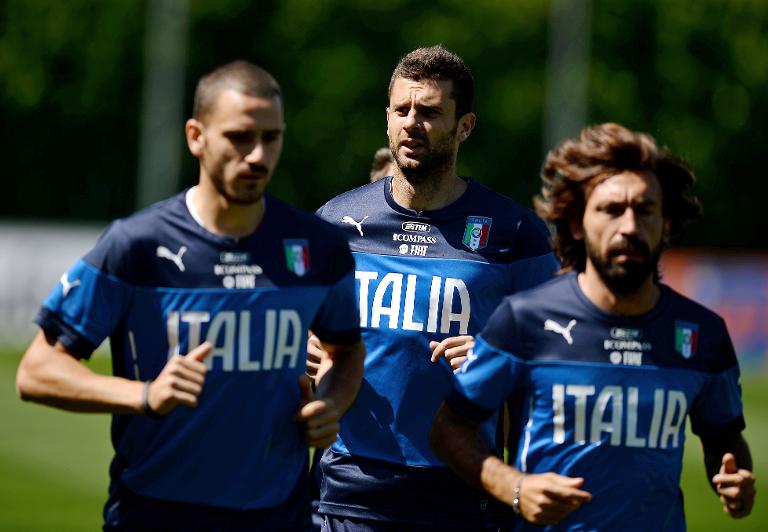 As expected from a man of few words, Andrea Pirlo has shrugged off suggestions his role for Italy at the World Cup carries special status as the Azzurri prepare to face England in Manaus on Saturday.

Yet evidence from past campaigns, including his role in helping dismantle England at Euro 2012, has had the tacticians in the English camp scrambling for a plan to stop the influential Juventus midfielder.

“That’s not the case,” said Pirlo when it was suggested to him that he will be the driving motor as Italy bid to overcome their shocking first round exit from South Africa four years ago.

“The entire 23-man squad will be important. To go all the way, we depend on everybody.”

Given his laid-back, taciturn manner, it’s no surprise Pirlo is loathe to talk about his importance to Italy, and the threat he can pose to rival teams.

Instead, it usually falls to others to add shine to the mystique of a player generally considered one of the world’s best in his deep-lying playmaking role.

At 35 years old, it is Pirlo’s final World Cup, but England’s Jack Wilshere is quick to highlight the skills the Italian used to devastating effect two years ago when England crashed out at the quarter-final stage of Euro 2012.

“He is the anchor, he picks the ball up, he’s a playmaker, he gets the play started and we saw that a couple of years ago in the Euros, he was great in that game,” said the Arsenal midfielder.

It was during a 10-year career with AC Milan that Pirlo forged the skills that have made him one of the best midfielders and free-kick specialists in the world.

The result was two Champions League titles, two Serie A titles and a string of superlatives.

When Milan failed to offer “the architect” a new deal in 2011, Juventus snapped up Pirlo on a free transfer.

Three consecutive Serie A titles, compared to zero for a crisis-hit Milan, underline who lost out in that transaction.

But despite the impact of a very candid biography, published only months before the Italian’s final World Cup appearance, ego has always played second fiddle to Pirlo’s sublime skills.

“To be recognised as a star has never interested me,” he added. “All I want to do is play, enjoy myself, win and help the team.”

Yet football fans around the world can’t be fooled so easily.

During last year’s Confederations Cup a sublime Pirlo free kick in a 2-1 win against Mexico prompted a standing ovation from large swathes of the Maracana Stadium crowd. It was testament to Pirlo’s standing in what was his 100th Italy appearance, which also brought him the man of the match award.

“It was very emotional receiving an ovation like that in my first match in Brazil,” added Pirlo. “It shows that you’ve left your mark.”

After a man-of-the-match performance during a scoreless draw with England in the quarter-finals of Euro 2012, Pirlo beat Hart in the shoot-out with a cheeky ‘Panenka’ spot-kick as England crashed out 4-2.

England manager Roy Hodgson suggests collective effort can keep Pirlo at bay on Saturday: “How are we going to stop Pirlo? What weâ€™re going to do first of all is play better this time than we did then.”

Wilshere, meanwhile, said it’s England’s plan to use one midfielder to “screen Pirlo”.

“There will be times in the game when he gets on the ball and then we just have to narrow in and stop his forward balls,” added the Englishman.

In what is his final World Cup, 2006 champion Pirlo said he’s ready for the challenge: “That’s all part of the game. Now, I’m used to being man-marked. I don’t like it, but you get used to it.”