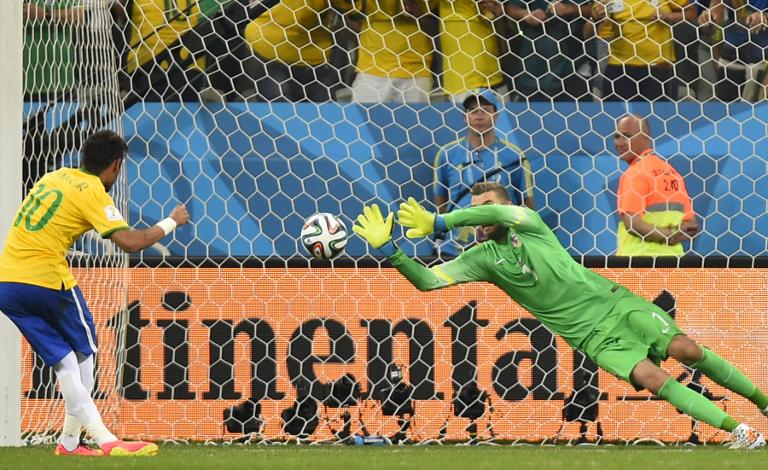 Neymar hit two goals including a bitterly contested penalty as he lived up to his star billing to fire Brazil to a 3-1 victory over Croatia in the opening match of the World Cup.

Violent protests in Sao Paulo were quickly pushed to one side as drama switched to the Corinthians Arena packed with 61,600 people — most expecting an easy Brazil victory.

But Croatia took a shock lead in the Group A game when Marcelo scored an own goal in the 11th minute.

Neymar pulled Brazil level after half an hour and Croatia reacted with fury when Japanese referee Yuichi Nishimura pointed to the penalty spot in the second half after Fred backed into Croatian defender Dejan Lovren and fell.

Croatian coach Niko Kovac said Nishimura was “out of his depth” and branded the penalty “ridiculous” but Brazil coach Luiz Felipe Scolari insisted the referee was correct to award the spot kick.

Neymar, who was also booked and lucky not to be sent off, converted the penalty to put Brazil ahead. Chelsea midfielder Oscar scored a brilliant individual goal to seal the crucial victory.

“I’m really happy, really happy,” said Barcelona’s Neymar, handed the man-of-the-match award. “I think even happier than I dreamed of and I thought I could be.

“I believe we have a very strong squad and when we play together, collectively as a team, I believe it’s very difficult to beat our team and today we showed that.”

Scolari hailed a “fantastic” performance from his players, praising their strength in coming back from 1-0 down and thanking the fans for their incredible support.

Five-time winners Brazil start the tournament as overwhelming favourites, seeking to heal decades of hurt after the humiliation of losing the final to Uruguay on home soil in 1950. But they made a nervous start.

The European side, who narrowly lost to the feted Selecao in the opening stages of the 2006 World Cup but were missing suspended star striker Mario Mandzukic, almost tore up the script.

The Brazilians, who had won their previous nine matches, struggled to find their rhythm after a rousing crowd rendition of the national anthem in the new stadium.

The 18th-ranked side took the lead when Ivica Olic, enjoying the space on the left, hit an inviting cross into the box.

Nikica Jelavic made contact and Brazilian defender Marcelo could not adjust his feet in time, watching in agony as the ball rolled into the net.

Marcelo was almost in tears. But the crowd urged the home side on and Oscar, Brazil’s most dangerous player, went close with a left-footed strike from outside the box.

Neymar, tipped by many to cement his place as one of the game’s global superstars, pulled his side level with a strike from outside the area on 29 minutes, sending the crowd into raptures.

The No. 10 ran onto a ball from Oscar before driving forward and shooting across Stipe Pletikosa with his left foot, the ball creeping just inside the post.

Brazil dominated possession for the remainder of the half but failed to create many clear-cut openings.

Both sides struggled to establish control in the second period and Kovac ordered on midfielder Marcelo Brozovic for Kovacic.

Brazil’s coach Luiz Felipe Scolari pulled off Paulinho to make way for Hernanes. He also brought on Bernard for Hulk and seconds later Fred won the penalty that devastated Croatia.

Lovren, who has demanded a transfer from English side Southampton, furiously pleaded his innocence.

It was a harsh punishment for Lovren, who seemed to barely touch the Brazilian centre forward.

“If anybody saw that was a penalty, let them raise their hand. I cannot raise my hand. I didn’t see it,” said Kovac.

“If you continue in this vein then there will be 100 penalties during this World Cup.”

Pletikosa got two hands to Neymar’s penalty but could not keep it out as watching President Dilma Rousseff cheered from the stands.

The crowd then vented its anger against the leader, battling to reverse widespread discontent over Brazil’s faltering economy and the record $11 billion it spent on the World Cup.

With time running out Brazil had to survive a few nervous moments and Julio Cesar pulled off a save seconds before Oscar put the icing on the cake to send the crowd home happy.

The other Group A teams Mexico and Cameroon play on Friday. Brazil’s next game is against Mexico on Tuesday. Croatia play Cameroon the following day.