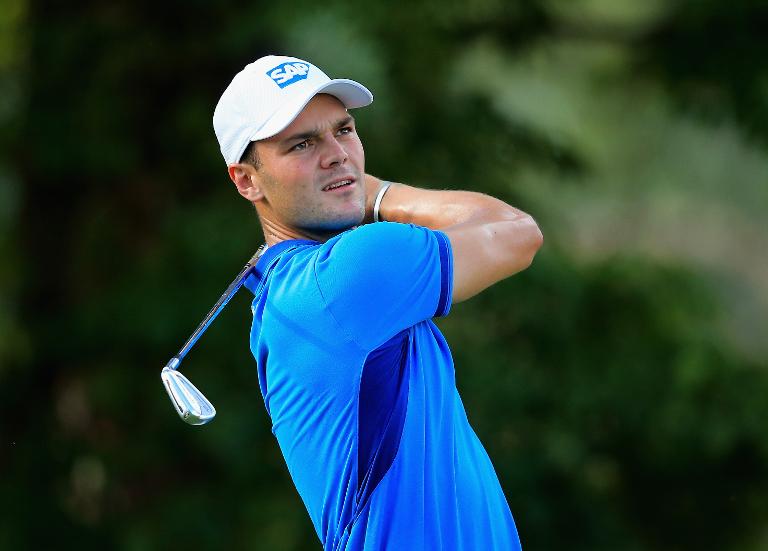 Germany’s Martin Kaymer, the 2011 PGA Championship winner, birdied three of the last five holes in a five-under 65 to seize a three-stroke first-round lead at the US Open Thursday.

The 29-year-old from Dusseldorf, coming off a victory in last month’s Players championship that ended a drought of nearly three years, fired the lowest US Open round at Pinehurst to seize command.

“It’s nice if you have just won before,” Kaymer said. “I needed a win. I needed it for my confidence, for all the work I put in the last couple years, to show it was all worth it.

Kaymer opened with a birdie, made another at the par-5 fifth, took his lone bogrey at sevenh but opened the back nine with another biride.

Then came a birdie binge that began at 14 and continued with a 12-footer at 16 and an eight-footer at 17. At 18, he rolled an approach eight feet past the cup but sank the putt coming back to complete a stunning round.

“I made a few putts at the end. I made a lot of good shots and finally I made some good putts,” Kaymer said. “I didn’t make many mistakes. It was nice to finish with a par on 18. It was an awkward up and down.”

Kaymer was shocked the turtle-backed greens were receptive to shots after being hard and fast in practice rounds.

“I was surprised the course played very soft,” he said. “They must have put more water on the greens. I was able to stop the ball.

“Overall I just hit very good shots. I could avoid bogeys. If you stay around level par, you aren’t going to be too far from winning the golf tournament.”

De Jonge opened with three-putt bogeys at 10 and 11 then battled back with birdies on three of the last five holes on the back nine and another at the fifth.

“It was nice to get it back after that start,” he said. “I just told myself everybody is going to make some bogeys at here.

“Anything under par is very pleasing.”

McDowell, the 2010 US Open winner, and Na, who only made the field by cracking the world rankings top 60 four days ago, each eagled the par-5 fifth.

“I clipped it just perfect, right in the center,” Na said after chipping in for his eagle.

“That was an unexpected opportunity,” McDowell said. “I wasn’t expecting it to be quite that receptive. Certainly got fortunate.”

Others were not so lucky.

World number one Adam Scott struggled to a 73, making four bogeys against a lone birdie, while reigning Masters champion Bubba Watson stumbled to a 76.

“I just didn’t make the putts I needed to make,” Watson said. “To shoot six-over is not where you want to be after one day. This week I’m just not very good.”

Scott, the 2013 Masters winner, was not ready to write off his chances for a second major title this week.

“I’m a little disappointed,” Scott said. “I played better than what I ended up shooting. You have to scramble hard at a US Open, especially this one, but not too much damage done.

“I can shoot five or six shots better tomorrow if I have a nice day around the greens.”

Reigning British Open champion Phil Mickelson, a six-time US Open runner-up trying for a win to complete a career grand slam, opened on 70.

“I putted OK,” Mickelson said. “I didn’t give any away on the short ones but I didn’t make any of those I needed from 15 to 20 feet to have a really good round.”

Rory McIlroy, coming off a win at Wentworth last month, birdied the 18th from 10 feet to finish on 71.

“I stayed patient and got rewarded with a birdie at 18,” McIlroy said. “It was a grind out there at times but to shoot plus-one was a solid day. I just have to work on my speeds on the greens.”