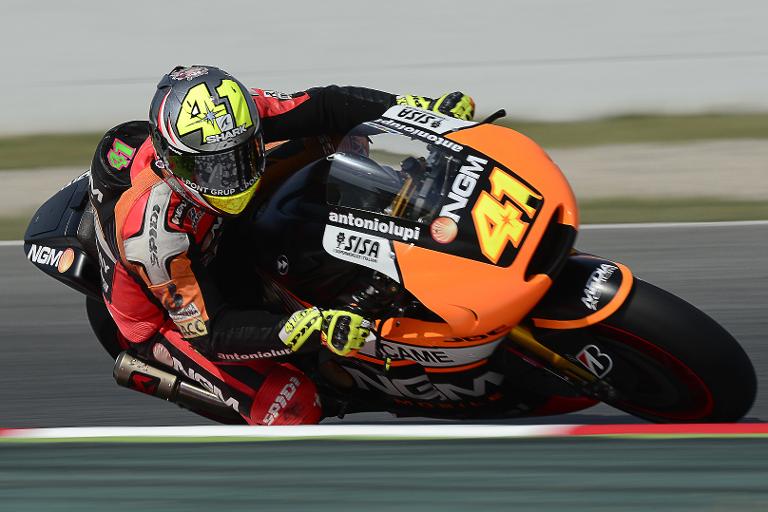 Home favourite Aleix Espargaro turned in the fastest times in practice for Sunday’s Catalunya MotoGP on Friday as he surprised the field on his Yamaha Forward over the first two sessions.

The Spaniard set the pace with a fastest lap of 1min 41.672sec with Britain’s Bradley Smith on a Monster Yamaha second quickest on 1min 42.123sec amid sweltering conditions at the Montmelo circuit.

Championship leader Marc Marquez, on a Honda, was fourth fastest 0.602sec off the pace and just behind Germany’s Stefan Bradl.

Espargaro said he took advantage of the cooler morning temperatures to finish ahead of the pack.

“I’m really happy to have set the fastest time in the morning because we suffered in the afternoon with the incredible heat which made the track very slippery and made the traction control system unable to help us as we wanted,” said Espargaro.

Marquez is chasing a seventh straight victory in Sunday’s race after making it a perfect six out of six on June 1 at the Italian MotoGP.

The practice sessions were hindered by scorching heat and track temperatures of up to up to 52 degrees Celsius which slowed the afternoon times.

Two-time world champion Jorge Lorenzom who won the race last year, was in fifth, while Valentino Rossi of Italy, the last rider in 2002 to win six straight races, settled for seventh in 1:42.423.

“In the morning it was good so I didn’t expect to have so many problems in the afternoon, but the track was much hotter and we had problems with grip and tyre consistency,” explained Lorenzo.

“Tomorrow (Saturday), we have to decide which tyres to use in the front and rear and try to make the bike more stable in acceleration.”

Rossi, who is second in the standings after finishing third in Italy, also blamed the conditions for difficult riding.

“It’s a shame because the track is fantastic but itâ€™s very difficult to ride, especially with the high temperatures, the tyres suffer very much because the load on them is very hard.

“The surface has a lot of bumps and not much grip. I think we have to work for the future because the surface is quite finished.

“It’s difficult to control the bike and I’m not very happy about my speed and position.”