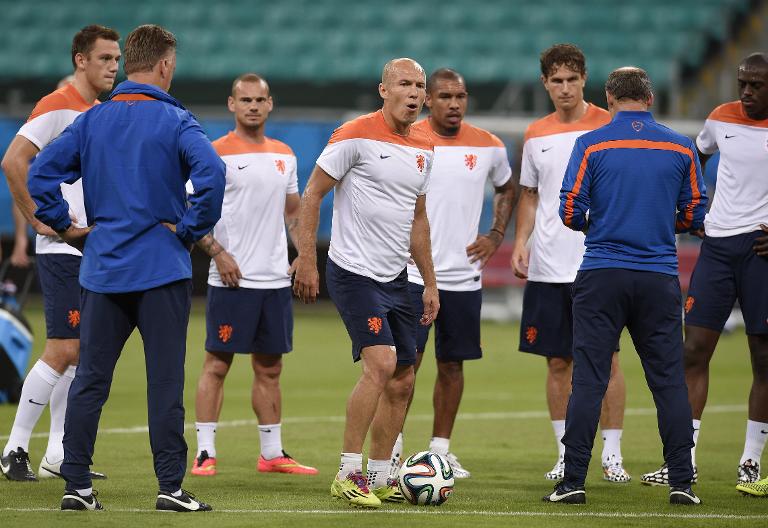 Holders Spain open their World Cup campaign against the Netherlands on Friday in a repeat of the 2010 final with the Dutch out for revenge.

Andres Iniesta’s strike four minutes from the end of extra-time in the Johannesburg final crowned Spain as world champions for the first time and now, four years later, the European giants clash again at Salvador’s Arena Fonte Nova in the mouth-watering opening match of Group B.

With South American dark horses Chile and Australia still to come, a win for either side would set the group’s agenda.

Captain Robin van Persie, Arjen Robben, Wesley Sneijder, Nigel De Jong and Dirk Kuyt are the five survivors from the 2010 final in the current squad and the Dutch have made no secret of their desire for revenge.

“It was a big chance for us to win the World Cup and we were really close,” said Aston Villa defender Ron Vlaar.

“It should always burn inside to make something right. To play against them now in the first game is a great challenge.”

Veteran midfielder Wesley Sneijder, who will win his 100th cap in the match, said the wounds of that defeat were still raw.

“It’s like a scar that hasn’t yet healed. It always gets me down when I think about it,” said the Galatasaray star.

As the double European and reigning world champions, Vicente del Bosque’s Spain are bidding to join Brazil and Italy as the only teams to have enjoyed back-to-back World Cup wins.

The ever-loyal Del Bosque is expected to make just one change from the side which started and won the Euro 2012 final with Chelsea’s Cesar Azpilicueta coming in for Alvaro Arbeloa at right-back.

Cesc Fabregas should start up front for Spain with Brazil-born Atletico Madrid striker Diego Costa expected to make a second-half appearance from the bench.

“We don’t have any fear. But we do have respect,” said del Bosque.

“Holland are a well-organised team, well-coached, and I am sure they will make things difficult for us.”

Spain can expect a hostile reception in Salvador, judging by last year’s Confederations Cup when they were widely booed on their run to the final where they lost 3-0 to hosts Brazil.

Van Persie is expected to be fit, despite arriving in Brazil as an injury concern after sustaining a groin problem in last week’s 2-0 friendly win over Wales in Amsterdam.

Coach Louis van Gaal has experimented with a 5-3-2 formation designed to close down Spain’s potent attack and counter-attack hard.

But the future Manchester United manager used a 4-4-2 formation against the Welsh to keep the Spanish guessing which system he will use in Salvador.

Much relies for the Dutch on their attacking triumvirate of Van Persie, Arjen Robben and Sneijder, while their defence has been criticised as the team’s weak link.

Spain are wary of their opponents’ ability to hit them on the break, warned midfielder Sergio Busquets.

The 25-year-old Barcelona star, who played in the 2010 final, said while most of the team that won the World Cup remained, Holland now have a lot of new young talent.

“We have practically the same players whereas they have had an infusion of new players and a new coach (Louis van Gaal),” said Busquets.

“They have deployed a different system of playing, with five defenders and relying on hitting their opponents on the counter-attack.

“We have to thwart their counter-attacks and also keep a close eye on their most effective players such as Arjen Robben, Robin van Persie and Wesley Sneijder.