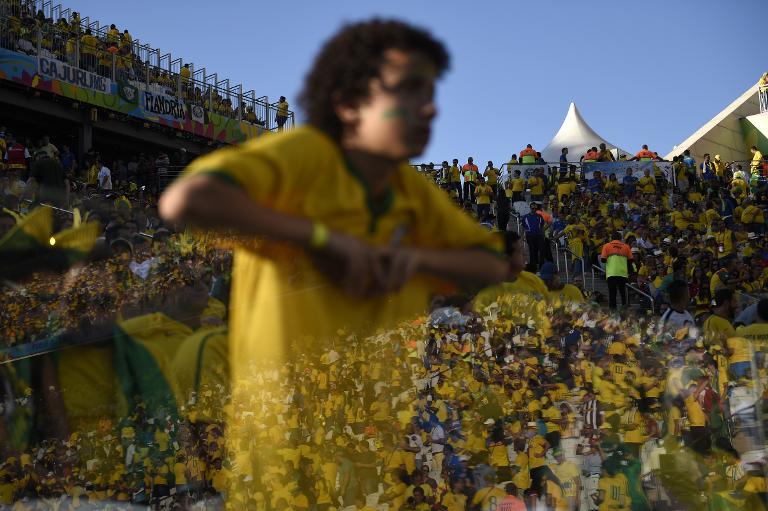 Anarchist demonstrators menacingly dressed in black shirts and masks lit bonfires of rubbish in the city after armoured police sought to quell protests ahead of Brazil’s match with Croatia at 5:00 pm (2000 GMT).

The clashes came as the eyes of the sporting world turned to Sao Paulo’s Corinthians Arena, where 12 heads of state or government were among VIPs in a 61,600 crowd gathered for the start of the month-long football extravaganza.

Preparations for the World Cup have been dogged by months of protests, reflecting widespread public anger over the record $11 billion lavished on the event.

In Sao Paulo, the launchpad for violent nationwide demonstrations last year which brought chaos to the Confederations Cup, protesters vowed to march on the stadium and disrupt the match.

But riot police responded forcefully, chasing protesters up a main avenue and firing tear gas in the middle of oncoming traffic, forcing cars decorated with the Brazilian flag to weave their way through the chaos.

A cannister fired by police hit and injured a CNN journalist and an AFP correspondent saw one woman in tears clutching her arm.

Around 1,000 protesters also gathered in the city centre, a small group of them scuffling with police, who arrested four people.

Most of the other World Cup cities were calm. But some took no chances. In Belo Horizonte, shopkeepers boarded up windows or drew down steel shutters.

Brazil’s leftist President Dilma Rousseff has accused opponents of waging a “systematic campaign” against the World Cup and issued numerous warnings that a repeat of the Confederations Cup violence would not be tolerated.

But Luiz Gustavo, 19, a journalism student dressed in black, told AFP: “Our strategy never was to stop the cup. The country is outraged at the waste on the World Cup.”

The scene inside Corinthians Arena was a world apart from the protests just up the road, as more than 600 dancers in colourful costumes joined pop superstars Jennifer Lopez and Pitbull to put on a lavish opening ceremony.

Samba dancers, capoeira performers and a drumming collective celebrated the vast South American country’s rich cultural diversity as J.Lo and company sang the official World Cup song, “We Are One.”

Despite being regarded as the spiritual home of football, Brazil has been slow to embrace World Cup fever.

Excitement has built gradually in the days leading to the event, with increasing numbers of Brazilian flags flying from cars, bars and apartment blocks.

A giant Brazilian flag was draped at the foot of Rio’s iconic Christ the Redeemer Statue on Thursday.

But while more Brazilians are sporting the yellow jersey of star forward Neymar, discontent continues to simmer.

The multi-billion-dollar cost of the World Cup has angered many in a country which has under-funded health and public services, and where violent crime is rampant.

Rage at poor public services morphed into a nationwide movement at the Confederations Cup test event, with deadly clashes rippling across the nation.

A vast security blanket is being deployed to shield the World Cup from unrest, with 150,000 soldiers and police on duty along with 20,000 private security officers.

Football’s governing body FIFA begins the tournament under pressure over graft allegations linked to its decision to award the 2022 World Cup to Qatar.

FIFA secretary-general Jerome Valcke said that he was confident that after years of cajoling the organisers to speed up delivery of the stadiums, things were now ready.

“Overall the stadiums are ready,” the 53-year-old Frenchman said. “Now it is more a problem of organisation than security.”

For all the off-field problems, the tournament itself has the makings of a classic.

Reigning champions Spain are bidding to make history by becoming the first side from Europe to win a World Cup in South America, which last hosted the tournament in 1978.

Vicente del Bosque’s side have dominated international football for the past six years, winning two consecutive European championships either side of their 2010 World Cup triumph.