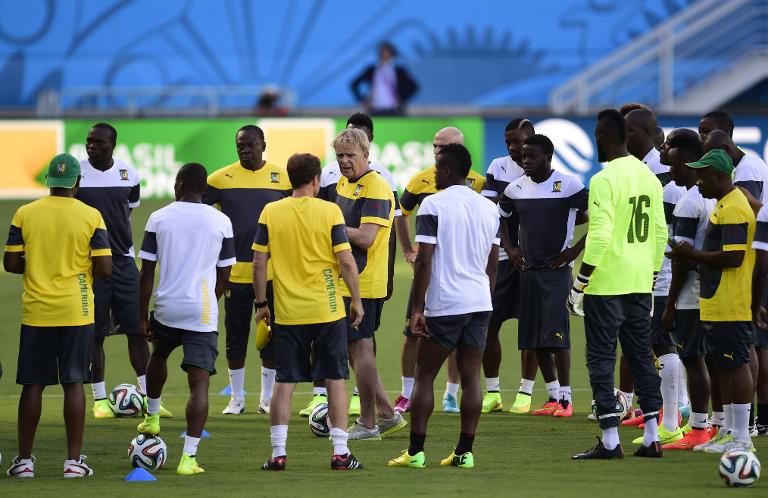 Mercurial Mexico host a troubled Cameroon in the sides’ World Cup Group A opener in Natal on Friday looking to take the first step towards an eventual first appearance in the quarter-finals in nearly 30 years.

Now coached by colourful Miguel Herrera, who missed out on playing for Mexico at USA ’94 after being dropped for punching a photographer, Mexico have in recent editions failed to live up to expectations.

In the past five tournaments the Aztecs have failed to get to the ‘fifth game’ and make the quarter-finals they last reached as hosts in 1986 when they bowed out 4-1 on penalties to West Germany.

Critics would argue Mexico should feel lucky to be in Brazil at all.

After a tortuous qualifying campaign, Herrera was parachuted in for a two-legged play-off against New Zealand, which the central Americans won 9-3 on aggregate.

But despite that result, Mexico have hardly lit up the world footballing stage of late, losing their last two friendlies 1-0 to Bosnia and Portugal.

In the latter encounter, Mexico spurned a host of chances and when they took their eye off the ball late on Bruno Alves struck the winner for Portugal in the 93rd minute.

“We haven’t been that convincing when facing goal, so we have to work on it,” admitted Herrera. “We have to work on keeping focus all the way to the finish. We can’t be losing games in the last 30 seconds.”

Mexico, noted for their 5-3-2 formation which focuses heavily on the running of the wingbacks, will however look to capitalise on the internal strife that has simmered within the Cameroon camp.

Four years after becoming the first African side to leave the 2010 tournament, with zero points from three games, Volker Finke’s squad recently threatened to refuse to board the plane to Brazil due to a row over bonuses.

A deal was finally reached, but the episode has enhanced the general feeling that the ‘Indomitable Lions’ will whimper and not roar their way through a group which includes Croatia and hosts Brazil.

Much of that in recent years has revolved around superstar Samuel Eto’o, whom the Cameroon federation once issued with a lengthy ban.

Although Cameroon possess class midfielders in the shape of Alex Song and Enoh Eyong, all eyes will likely be glued on Chelsea striker Eto’o — a four-time African Player of the Year who will be appearing in his fourth finals.

“He is an experienced player and a handful to deal with,” said Brazil skipper Thiago Silva, of Paris Saint Germain.

“In the Champions League he wasn’t 100 percent but he made his presence felt. He has impressive technical abilities and is lethal in the box.

“He is the striker who most worries me.”

Finke, who spent 16 years in charge of German over-achievers Freiburg, will be hoping there is still something to play for by the time they meet Brazil on June 23 in Brasilia.

Midfielder Stephane M’Bia, fresh from Europa League triumph with Spanish side Sevilla, insisted to AFP: “Four years ago we were catastrophic. The mood in the camp wasn’t good, there were a lot of problems.

“But this time that’s not the case. We’ll be making our mark on this tournament.”