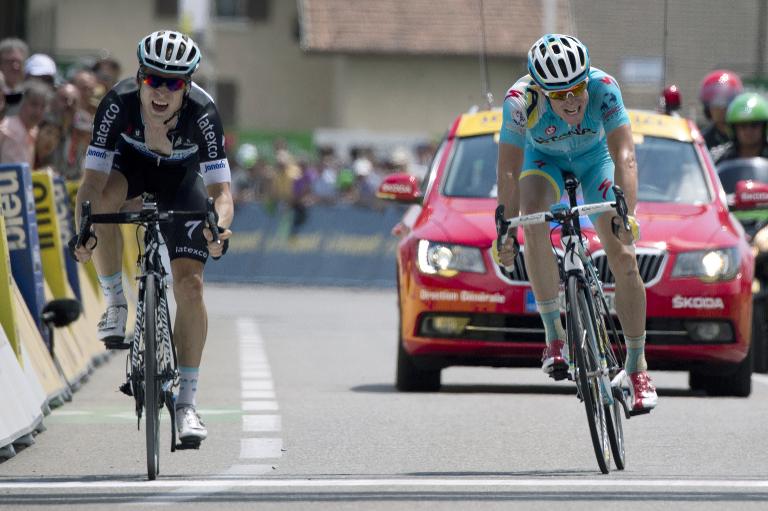 Froome, the defending Tour de France champion, came home with his jersey and shorts shredded after crashing with 7.5km to race.

He lost over a minute on the peloton but sportsmanship prevailed as main rival Alberto Contador and the rest of the pack waited for Froome to catch up.

The Kenyan-born British Sky rider had deep grazes and cuts across his back, shoulder, elbow and hip as he arrived over four minutes behind Bakelants.

“It’s nothing serious,” said Froome. “I must have hit a hole and the front wheel slipped. It hurts but I haven’t broken anything. I’ll need a few bandages,” he added.

The defending Dauphine champion also thanked his rivals in the peloton for slowing down so he could catch the main pack.

“They told me that the Tinkoff riders (Contador’s team) and Astana riders (Vincenzo Nibali, 6th overall) were the first to tell the peloton to slow down and wait for me. I thank them for that, which was a great sporting gesture.” added Froome.

Bakelants, 28 and a Tour de France yellow jersey holder for two stages last year, won a two-man sprint against Dutch time-trial champion Lieuwe Westra after the duo broke free of an escape group down the stretch.

“On the last climb, we had the same level but it was impossible to drop him (Westra),” said Bakelants.

“I was waiting for the sprint and I was a bit faster but I was lucky that he didnâ€™t close the door on me.” he added.

The stage covered 178.5km from Grenoble to Poisy with third place going to Czech rider Zdenek Stybar, who won a sprint from a small group 24 seconds behind the leaders.

With Saturday’s decisive mountain stage on the penultimate day, Froome is certain to be attacked by Contador who lies 12 seconds back.

Also tied for second is Dutchman Wilco Kelderman who closed the gap on Contador during Thursday’s fifth stage.

The stage will culminate with two beyond category climbs and a summit finish where the race is almost certain to be won or lost.

“I donâ€™t know the final climb but Iâ€™m sure that those who have the legs to do it will attack me. Itâ€™s not up to me to do it but Iâ€™ll see how I feel,” Froome added looking ahead to Saturday.