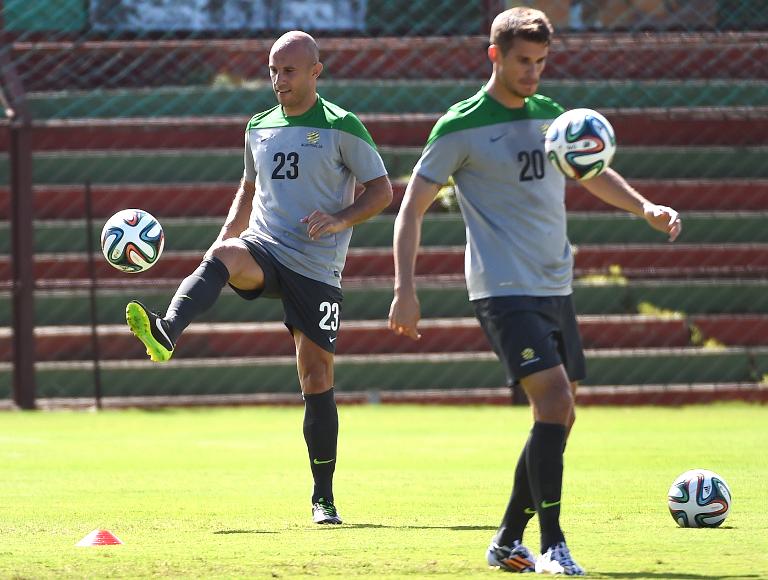 World Cup outsiders Australia are aiming to punch above their weight and give a Chile side choc-a-bloc with talent a bloody nose in Cuiaba on Friday.

The two Group B protagonists are worlds apart in FIFA’s rankings — Chile are 14 with Australia down at 62 — so the South Americans are heavy favourites to sweep aside the Socceroos and get their campaign off to the perfect start.

The odds may be stacked against them, but Australia, unshackled by any smidgen of pressure, are not short of self-belief ahead of this clash against a team they held to a goalless draw on their World Cup debut in 1974.

“We don’t care who we’re up against,” said Swiss-based attacking midfielder Dario Vidosic.

“There can be 11 Ronaldos or Messis out there. We want to make everybody proud back home. We’ve worked very hard to get to this stage.

“We’ve got three guaranteed games and we’re just going to give it everything that we can to get out of the group stage.”

The Aussies laid down a marker of their intent in a battling single goal defeat to fellow finalists Croatia in their last warm-up.

Alex Wilkinson, who played a part against Croatia, hopes he’s done enough to make it on to Postecoglou’s starting XI.

Wilkinson hinted that Chile could be in for a surprise.

“They’re expecting us to be physical and we will be physical — but we also want to show them we can play football as well,” said the player with South Korean outfit Jeonbuk Motors.

Despite the infectious enthusiasm emanating from the Aussie camp the serious money on Friday is on Chile.

Coached by Argentine Jorge Sampaoli, the South Americans take to the Arena Pantanal pitch buoyed by the apparent recovery from injury of midfield star Arturo Vidal.

The Juventus man, who underwent knee surgery last month, was a doubt after battling an inflammation.

But he appeared to have shrugged off that problem when turning out on Wednesday for his first training session since making an unforecast 15-minute comeback a week ago in the 2-0 friendly victory over Northern Ireland.

Like Vidal, another vital component of this Chile team is Barcelona forward Alexis Sanchez, reportedly a target of Manchester United’s new boss Louis van Gaal who is in Brazil as Holland manager before moving to Old Trafford.

And Sanchez stoked up expectations back in Santiago on Wednesday when he told a local newspaper: “I believe Chile are going to win the World Cup, if I didn’t believe that I’d be at home watching television.”

Of Chile’s chances of solving the complex first round puzzle set by a Group B including Holland and world champions Spain he said: “I’d be happy if we finished as runners-up behind them (Spain).”

Sanchez’s rags to riches story from a humble background to world class footballer is the stuff of any kid’s dreams, and he is fully conscious of the benevolent hand dealt to him by fate.

“If I hadn’t become a footballer I’d have probably ended up working down the mines, or something more basic,” he suggested.

Chile’s record against Australia stands at 3-1. They reached the semi-finals when hosting the 1962 World Cup, and made it to the last 16 in 1998 and again four years ago in South Africa.

Their Friday rivals reached that stage in 2006, heartbreakingly losing in stoppage time to eventual winners Italy.

The game, staged at Cuiaba’s 40,000-seater Arena Pantanal, follows the Group B opener between Spain and Holland in Salvador.