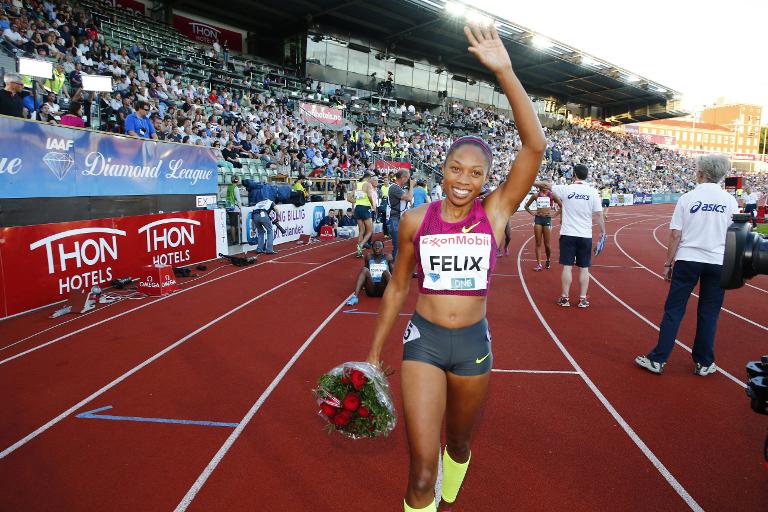 Allyson Felix coasted to victory in the women’s 200m at Wednesday’s Diamond League in Oslo as French pole vault master Renaud Lavillenie extended his winning streak in 2014 to 10 competitions.

In balmy conditions at Bislett Stadium, there was also a notable performance from Ashton Eaton, the American becoming the first decathlete to win an event in the Diamond League when he claimed victory in the 400m hurdles.

American runner Felix looked unruffled in her win, coasting home in 22.73sec ahead of Briton Jodie Williams and France’s Myriam Soumare, both of whom had earlier also run in the 100m, the Frenchwoman winning in 11.18sec.

For Felix, a four-time Olympic gold medal winner and one of the dominant figures over the distance having won three consecutive world titles, it was a further step back towards recovery after an injury-plagued 2013.

Last season was one to forget, the American winning only two Diamond races before crashing out of the Moscow world championships 200m with a hamstring injury.

It was a far cry from 2012, when she claimed Olympic gold in not only the 200m, but also the 4×100 and 4x400m relays, guaranteeing her place as one of the most decorated athletes in the sport’s history.

“I just wanted to work on some of the things I’ve been doing in practice,” said Felix. “The speed is not quite there, but it’s coming, and hopefully the rest of season it’ll keep progressing.

“It’s definitely been a rocky road, there’ve been ups and down, and setbacks, it’s going to take me a little bit to get back to that top form… It’s a work in progress!”

Renaud Lavillenie stretched his winning streak in 2014 to 10 events, a best of 5.77m enough to see off the opposition.

It continues a remarkable year for Lavillenie, who has also broken Sergey Bubka’s long-standing world record when he vaulted 6.16m indoors in Donetsk in February.

“I’m just taking it one competition at a time in the build-up to the European championships,” Lavillenie told AFP.

There was more good news for France when Pascal Martinot-Lagarde set a world lead of 13.12sec in the 110m hurdles, but sprint hopeful Jimmy Vicaut was beaten at the line in the 100m.

Trinidad and Tobago’s Richard Thompson, a double silver medallist in the 2008 Beijing Olympics, showed all his experience by throwing a savage dip for the line to win in 10.02, Vicaut clocked at 0.02sec adrift.

In just his fifth race over the 400m hurdles, world and Olympic decathlon champion Eaton notched up his second victory, demonstrating a fluid, no-nonsense style becoming someone whom Jamaican sprint king Usain Bolt has hailed as the world’s best athlete.

Eaton was quickly up on South African LJ Van Zyl in his outside lane, and held that lead right through to the end, finishing in 49.16sec, with fellow American Johnny Dutch taking second at 0.61seec.

“I’m still learning the event, but I won and the time is also okay, so nothing to complain about” said the 26-year-old, the only decathlete to go over 9,000 points when he set the world record in the US trials for the 2012 London Olympics.

“Of course, it could be smoother, but that is what I aim for, maybe in my next and last race in this period in Europe, in Ostrava (on June 17).”

The hurdles race is all about mastering the number of strides between the obstacles, something Eaton picked up quickly, having competed in the 110m hurdles for combined events, but also something he said he would continue working on.

The fabled “Dream Mile” was claimed for the second consecutive year by Djibouti’s world indoor 1500m champion Ayanleh Souleiman, who clocked 3:49.49 to finish ahead of hard-charging New Zealander Nick Willis.

Kenyan world champion Eunice Sum won the women’s 800m in 1:59.02, a leaden-footed Caster Semenya finishing 12th and last, the 2009 world champion and Olympic silver medallist coming in more than 4sec off the pace.