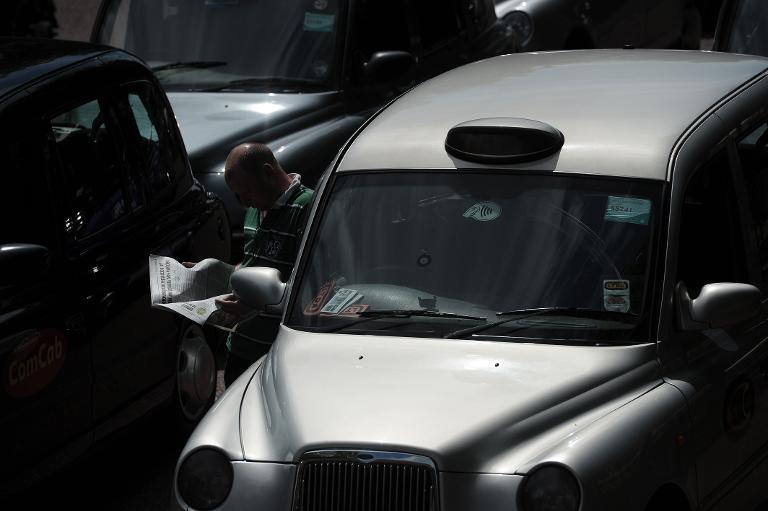 Taxi drivers brought parts of London, Paris and other European cities to a standstill on Wednesday as they protested against new private cab apps such as Uber which have shaken up the industry.

Thousands of London’s iconic black cabs, many of them beeping their horns, filled the roads around Buckingham Palace, Trafalgar Square and the Houses of Parliament to the exclusion of any other vehicles.

In Paris, hundreds of drivers blocked the French capital’s airports and staged a “go-slow” during the morning rush hour, while protests were also staged in Madrid, Barcelona, Berlin, Rome and Milan.

Long-running complaints about competition from private hire and unlicensed taxis have been crystallised by the new challenge posed by smartphone-dependent car services.

California-based company Uber is the main target of the drivers’ ire, thanks to an increasingly popular app that is now used in 128 cities in 37 different countries.

Uber allows customers to order and pay for a car using their phone, with geo-locating technology connecting them to the nearest taxi driver.

Unlike other private hire cabs — those that must be pre-booked — Uber drivers use the app to fix the fare, rather than it being calculated by a central operator.

Critics say this amounts to a meter such as those used by traditional London taxis, and say that Uber cars should therefore be subject to the same tough regulation.

“We’re governed by a set of rules and they don’t seem to apply to Uber,” said Glenn Chapman, a 46-year-old driver parked in a long line of cabs outside Downing Street.

But the irony of the protest is that it has provided widespread publicity for the app, and Uber has taken advantage by offering discounts during the strike.

Among those joining the protest were would-be drivers on mopeds who are learning The Knowledge, a detailed study of London street routes that every “cabbie” must complete.

“The Knowledge took me two and a half years. But then all of a sudden anyone can jump in a cab and do our job,” Chapman told AFP.

The Licensed Taxi Driver Association (LTDA), which predicted 10,000 cabs would join the protest, has lodged a legal challenge against the capital’s Transport for London (TfL) authority to protest against Uber.

TfL Chief Operating Office Garrett Emmerson urged the cabs to wait for the outcome of the High Court case, saying the demonstration was a “pointless disruption”.

The London protest was joined by drivers across Europe, where the focus on Uber has reignited long-running disputes about the introduction of private hire cab services.

Critics say they are not subject to the same requirements about training, insurance and criminal checks as the taxis that are licensed to pick up customers in the street.

As such, they are able to undercut official taxis — a policy that has seen Uber fall foul of fares set by New York City’s taxi commission.

On Tuesday, the Spanish region of Catalonia also warned it would fine any unauthorised Uber drivers up to 6,000 euros (8,120 euros).

“Uber is deliberately not respecting regulations and on top of that has significant financial means,” said Serge Metz, chief executive of French company Taxi G7.

Launched in 2009, Uber was last week valued at $17 billion (12 billion euros), one of the highest-ever figures for a technology startup.

However, Uber general manager Jo Bertram insisted the company’s drivers had passed a “stringent and comprehensive” audit imposed by authorities in London.

She accused taxi drivers of being “stuck in the dark ages”.

In London, private hire cars or mini-cabs outnumber the traditional black cabs by two to one. In France, taxis are still fighting their presence, albeit with limited success.

Drivers in France have staged several protests recently, and hundreds of vehicles blocked the main Roissy and Orly airports in Paris on Wednesday, many displaying the banner “taxis on strike” and “No to unfair competition”.

Manuel Quina, a taxi driver for five years, told AFP: “Clients should be able to choose their own mode of transport but the law must be respected.”

In Rome, taxi drivers were planning a “reverse strike” by charging only 10 euros per trip to fall in line with competitors’ prices.

In Milan and Madrid, taxis staged a day-long strike, while hundreds of drivers parked up for a protest in Berlin.