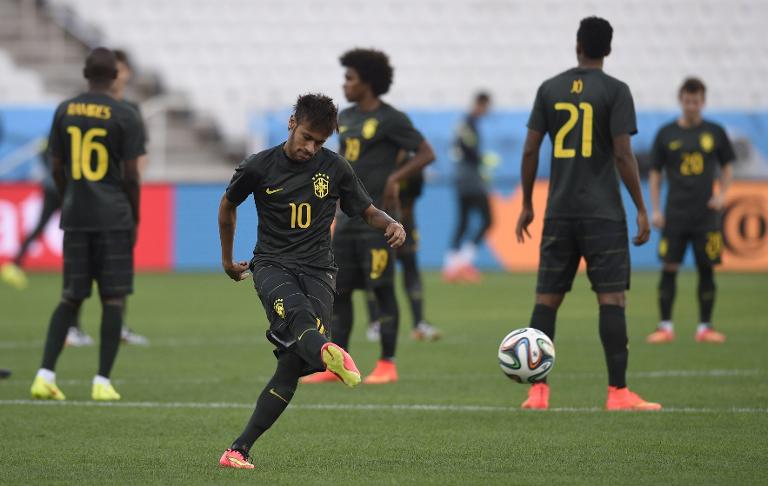 Brazil are desperate to make a powerful statement of intent in Thursday’s World Cup opener against Croatia as they seek to relieve the suffocating pressure that has engulfed the team in the build-up to the tournament.

Coach Luiz Felipe Scolari has the luxury of being able to field the same team that destroyed world champions Spain 3-0 in the final of last year’s Confederations Cup, with Barcelona star Neymar the focal point of a powerful and settled line-up.

The five-time champions are expected to qualify from their group without too much trouble but Barcelona defender Dani Alves admitted there was anxiety ahead of the Sao Paulo opener, as they seek to ease the jitters.

“I have always said that if you don’t feel anxiety it is not worth being a professional athlete. The opening game is difficult, important,” said Alves.

“The three points count but so does the idea of sending out a message to our rivals. The most important game at the World Cup, for everyone, is the opening game.”

He added: “We will only know on Thursday if everything is OK. We are very confident and we want this moment to come. We want to enjoy the World Cup. We are going to try to give a good image.”

The only question mark for tournament favourites Brazil for the match at the new Corinthians Arena would appear to be over the out-of-sorts Oscar, with his impressive Chelsea team-mate Willian pushing for a starting berth.

But Scolari, who masterminded Brazil’s last World Cup win in 2002, is likely to stick with his tried-and-tested winning formula against 18th-ranked Croatia after the same 11 edged past Serbia 1-0 in a friendly last week, courtesy of a goal from Fred.

Brazilian reserve striker Jo, speaking after training on Tuesday, said the mood in the camp was calm but the nerves would be jangling as kick-off approached.

“At this moment, everyone is calm,” said the striker. “When we go to Sao Paulo and the game approaches, there will be excitement, anxiety. But the opening of the World Cup in our country will be different to others.”

And squad member Bernard said it was crucial to start the tournament with a win as Brazil chase their first World Cup tournament win on home soil.

“There are no easy games and the game against Serbia was very complicated,” said the winger. “They are quite a well-balanced side. I think the game against Croatia will be similar. It’s important to be focused on the opening game, we need to start off with three points.”

Croatia will be missing Bayern Munich striker Mario Mandzukic because of a red card he picked up in a match against Iceland in November.

But they also boast Real Madrid’s Luka Modric in their line-up, who said the key to the game would be the midfield battle, admitting the task of taking on Brazil in their own backyard was daunting.

“Virtually every game is decided in the midfield. In most situations the winner is the team that has the better midfield,” said Modric. “I hope that we can show our qualities and can beat Brazil. But this will of course be very difficult.”

And Modric, fresh from winning the Champions League with Real Madrid, highlighted the danger of Neymar, hailed by many as the key man for Brazil.

“Neymar did not have the best of season with Barcelona, â€‹â€‹but when he plays for Brazil, he is a completely different player,” said Modric. “But I believe that we will find a way to stop him.”

The match will be played in the 61,600-capacity Corinthians Arena, which was delayed by accidents in which three workers were killed.