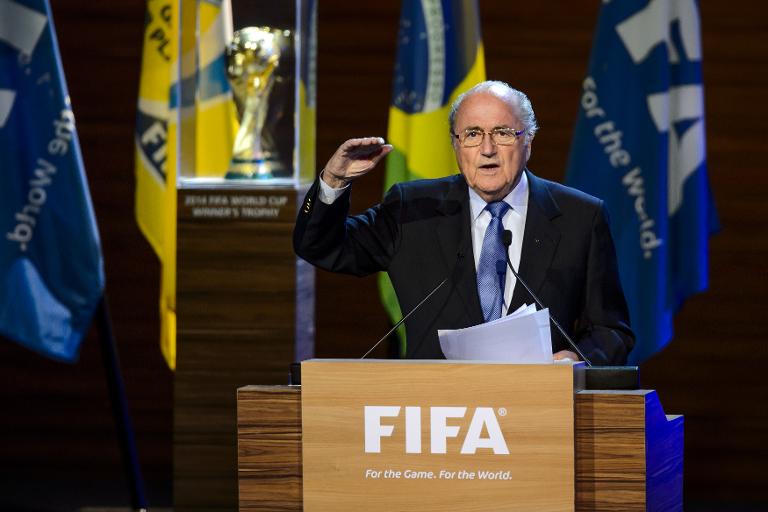 Sepp Blatter is ready to seek a new term as FIFA’s president, he announced Wednesday, ignoring calls from top European officials to stand down as controversy engulfs football’s governing body.

“I’m ready to accompany you in the future,” the 78-year-old Blatter told the FIFA congress in Sao Paulo on the eve of the World Cup.

The FIFA leader was helped by a congress vote not to consider age- and term-limits for officials. He later denied having any designs on a life-time presidency.

Isolated boos could be heard among the applause as Blatter said that conditions were good for him to seek a fifth term next year. But he has a strong chance of victory in the election to be held at the FIFA congress in Zurich in May next year.

“My mandate will finish next year… but my mission is not finished,” he said in his closing address. “Together we will build the new FIFA, together we have the foundations to do things.”

Blatter added: “Congress, you will decide who will take this proud institution forward. It’s your decision to do so. But I will tell you, I’m ready to accompany you in the future, for the game, for the world.

“Because it’s your decision congress, if you want to go with me,” he said, exiting to clapping and Brazilian music.

Blatter has dropped heavy hints in past months that he will be a candidate again, even though he said when he won in 2011 that it would be his last term.

Despite stopping short of formally announcing his candidacy, his comments are likely to vex European delegates who this week called for him to stand down next year.

Blatter has long been a controversial figure, and FIFA, which oversees a multi-billion dollar industry, has never been far from scandal.

Just prior to the World Cup, Britain’s Sunday Times has published a series of reports alleging that millions of dollars in bribes were paid to help Qatar secure the 2022 edition.

Blatter succeeded scandal-plagued Brazilian Joao Havelange in 1998. Under his stewardship, football’s revenues have mushroomed, with huge amounts from television rights and sponsorship.

But it has also attracted scandal, the latest of which is led by media reports that Qatar’s Mohamed bin Hammam paid more than five million dollars in bribes to win support for the Gulf state’s 2022 World Cup bid.

Qatar has denied any wrongdoing, and Blatter has said the corruption allegations are racist. But the scandal has still tainted the build-up to the start of the Brazil World Cup on Thursday.

In rare public comment on the issue, former FIFA executive committee Junji Ogura from Japan said most senior figures want the truth unearthed and welcome the spotlight on the scandal-hit organisation.

“There are a lot of people in the executive committee who feel that way, and it’s why things are being investigated,” he told Kyodo News in Sao Paulo.

“If it’s made clear what is allowed and what isn’t allowed, then people will stop doing these things. Everything ought to come to light — in black and white,” said Ogura, who was on FIFA’s top committee from 2002 to 2011.

The colourful Blatter lived up to his eccentric image when he danced on stage at the congress and even suggested an inter-planetary version of the World Cup.

He was given a standing ovation by African and Asian confederations when he went to their meetings in Sao Paulo this week.

The Swiss enjoys strong support among those blocs, which owing to their size constitute a powerful voting force within FIFA.

But he had a poor reception when he went to the European confederation, UEFA, where some delegates called for him to stand down when his term ends.

“Something like this, lacking respect like I saw and heard in the UEFA meeting, I have not had in my entire life,” Blatter told reporters after the congress.

Lord David Triesman, a former head of England’s Football Association, said Wednesday that FIFA was like a “mafia family” with Blatter its “Don Corleone”.

Blatter refused to comment on Triesman’s description. Just prior to his statement on the presidency, he announced millions of dollars in disbursements to member associations and regional confederations.