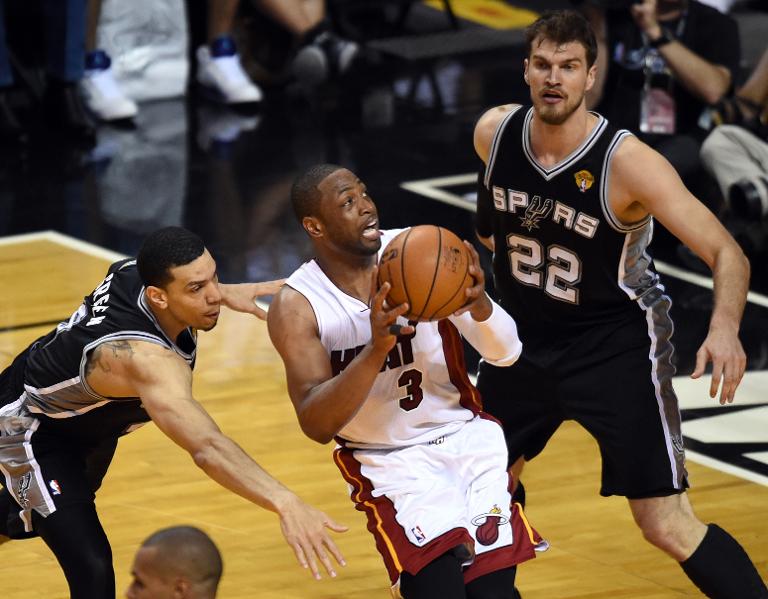 Kawhi Leonard tallied a career-high 29 points as the San Antonio Spurs thrashed the Miami Heat 111-92 in game three of the NBA finals.

Tim Duncan finished with 14 points and six rebounds Tuesday while Danny Green scored 15 points for the Spurs, who jumped out to a 25-point lead in the first half then held on for the victory and a 2-1 series lead.

Spurs coach Gregg Popovich said he was looking for more offence from Leonard on Tuesday. Leonard was hindered by foul trouble in the first two games, fouling out in the game-two defeat in San Antonio.

“We just wanted him to be who he has been the whole year,” Popovich said. “I think he overreacted to the foul situations in the first two games and he became very cautious and he doesn’t play like that.

“He has got to be active at both ends, so he figured it out.”

The first half was an old-fashioned shootout as San Antonio put on the best shooting display for a half in NBA finals history, hitting 19 of their first 21 shots.

The two-time defending champion Heat cut the deficit to seven points at one stage in the second half but they never could recover from the Spurs’ opening blitz that saw San Antonio shoot a superb 75.8 percent from the field to lead 71-50 at halftime.

“I don’t think we will ever shoot 76 percent (at halftime) in a half again,” Popovich said. “I mean, that’s crazy.”

Game four of the best-of-seven series will be on Thursday night in Miami.

LeBron James and Dwyane Wade pumped in 22 points each for the Heat, who suffered their first home loss of the 2014 post-season.

Rashard Lewis finished with 14 points and Ray Allen came off the bench to score 11 in the loss.

Heat coach Erik Spoelstra said his troops dug themselves too big a hole in the first half to overcome.

“They won the battle clearly tonight,” said Spoelstra. “We came out at a different gear than what we were playing. It just seemed we were on our heels most of the first half.’

Miami lost the finals in 2011 then won back-to-back titles in 2012 and last season — when they beat the Spurs in seven games.

This is the first NBA finals rematch since the Chicago Bulls battled the Utah Jazz in 1997 and 1998.

Tuesday’s contest was reminiscent of last year’s game three of the NBA finals.

San Antonio bounced back in game three, setting the finals record for most three-pointers in a game with 16. They went on to win 113-77, handing the Heat their worst loss in franchise playoff history.

Swingman Leonard led the scoring explosion Tuesday, with 16 of his points coming in the opening quarter for the Spurs, who are trying to win their fifth title since 1999.

Leonard shot six-of-seven from the field and made all three of his shots from beyond the arc in the first half. His first missed shot didn’t come until late in the second quarter.

The Spurs were so dominant on offence that at one point they were shooting 90 percent from the field — a better ratio than their free-throw shooting.

“I was just in attack mode and trying to be aggressive early,” said Leonard.

James did his best to keep the Heat in it in the first half, but he couldn’t do it by himself and the 71 points was the most given up by the Heat in a playoff half in their history.

“They just jumped on us,” James said. “This is something that at this point in the season shouldn’t happen.

“This is the last team in the NBA you want to dig yourself a hole against.”

Wade, who was fined $5,000 for flopping in game two, had five turnovers in the first half for Miami, who shot a respectable 47.6 percent from the field overall.

Wade came to life in the third quarter, scoring 11 points as the Heat cut the Spurs’ lead to 86-75 heading into the fourth. They held the Spurs to just 31 percent shooting in the third.