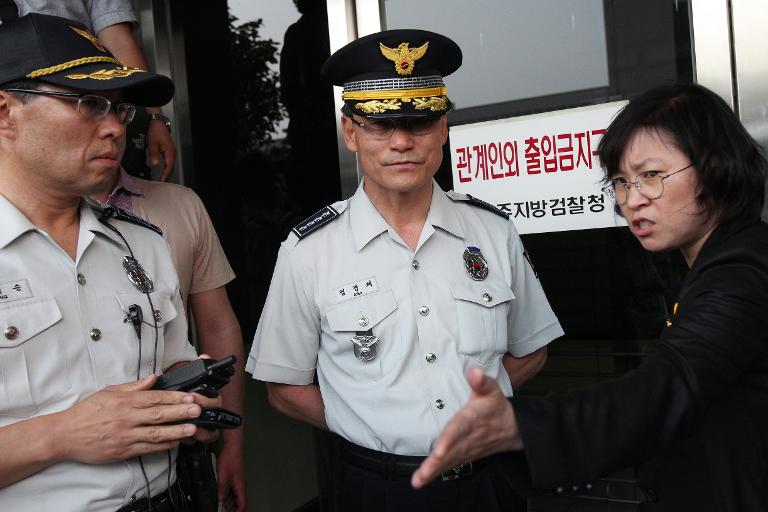 Thousands of South Korean police forced their way into the compound of a splinter religious group Wednesday in their search for a fugitive businessman wanted in connection with April’s ferry disaster.

Live television reports showed police officers, many in full riot gear, streaming into the sprawling church and farming complex in a morning raid in Anseong, 80 kilometres (50 miles) south of Seoul.

A spokesman for the Gyeonggi province police force said 6,000 officers were involved.

The huge operation came a day after President Park Geun-Hye urged police and prosecutors to step up a manhunt for Yoo Byung-Eun, 72, a leading member of the Evangelical Baptist Church of Korea.

Yoo is the patriarch of the family behind the Chonghaejin Marine Co. — the company that owned and operated the 6,825-tonne Sewol passenger ferry which sank on April 16 with the loss of 300 lives, most of them schoolchildren.

“Yoo must be brought to justice,” Park told a cabinet meeting.

He is wanted for questioning on possible charges of embezzlement and criminal negligence, as prosecutors investigate the extent to which the Sewol disaster was caused by a lack of safety standards and regulatory violations.

The raid netted three church followers suspected of helping Yoo evade a nationwide dragnet put in place after he defied an official summons to surrender to prosecutors last month.

Police were searching for 10 more alleged accomplices identified in a warrant that was “also aimed at getting hold of Yoo and his son,” a prosecutor told AFP.

Yoo has no direct stake in Chonghaejin, but his children and close aides control it through a complex web of holding companies.

A reward of 500 million won ($490,000) has been offered for information leading to the capture of Yoo and 100 million won for that of his eldest son, Yoo Dae-Kyun.

Police had raided the church complex in Anseong three weeks ago but came away empty-handed, amid reports that Yoo may have fled overseas.

The church followers erected a barricade at the entrance to the complex, but made no move to block the police Wednesday after they forced their way through.

More than 100 members staged a sit-down protest outside the main gate of the complex, singing hymns and chanting slogans.

One spokesman argued that Yoo was being set up as a fall guy for the Sewol disaster, because the government was unwilling to accept responsibility for regulatory failings that contributed to the tragedy.

“(Prosecutors) should fully investigate the true cause of the accident before arresting Yoo,” he said in statement read out to reporters.

“Our church will give 500 million won for those who reveal the truth behind the accident,” he added.

Yoo has described himself as an artist and photographer, and was once convicted of fraud when a company under his control went bankrupt.

The Sewol’s regular captain, who was off duty on the day of the accident, has told prosecutors that Chonghaejin Marine Co. “brushed aside” repeated warnings that the 20-year-old ship had stability issues following a renovation in 2012.

Five Chonghaejin officials have been arrested on various charges, including criminal negligence and breaches of maritime safety laws.

The police operation also came a day after the trial opened of 15 of the Sewol’s surviving crew.

The captain and three of his senior crew members are charged with “homicide through wilful negligence” and could face the death penalty if convicted.