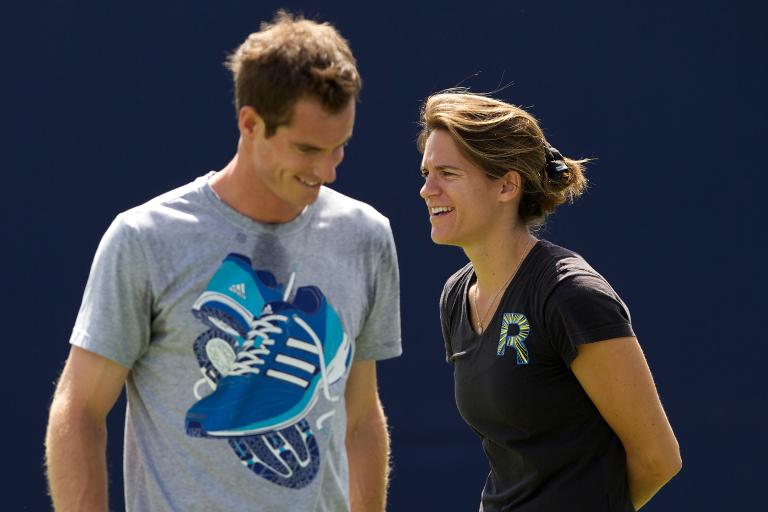 Andy Murray made the perfect start to his bold venture with new coach Amelie Mauresmo on Wednesday as the Wimbledon champion opened his Queen’s Club title defence with a 6-4, 6-4 win over Paul-Henri Mathieu.

Murray sent shockwaves through the tennis world when he announced on Sunday that Frenchwoman Mauresmo would replace Ivan Lendl, who quit in March, as his coach for at least the grass-court season.

The 27-year-old’s decision to ignore several high-profile male coaches to hire Mauresmo, a former world number one and Wimbledon champion, has been the talk of the sport for the last three days.

Mauresmo, the current France Fed Cup captain, has tried her hand at coaching on several occasions since retiring in 2009.

She had a brief spell working with male player Michael Llodra in 2010, but in the testosterone fuelled world of men’s tennis few leading players have female coaches and the decision is seen in some quarters as a major gamble.

In the circumstances, a routine second round victory at this Wimbledon warm-up was exactly the kind of first date the pair needed as Murray, bidding to win Queen’s for a record-equalling fourth time, proved far too strong for world number 92 Mathieu.

Since losing to Roger Federer in the 2012 Wimbledon final, Murray has been unstoppable on grass and his winning run, which brought him Olympic gold, a first Wimbledon crown and a third Queen’s title, has now extended to 19 matches.

Asked what Mauresmo would make of his performance, Murray told the BBC: “I don’t know, I’ll go and speak to her and see what she thinks.

“I served pretty well. It was a good start to the grass-court season. I have great memories here and always enjoy coming back.”

Murray emerged to warm applause sporting a neat new haircut, while photographers focused their lens on Mauresmo, wearing a black T-shirt, as she took her place next to assistant coach Dani Vallverdu at one side of the players’ box, with the Scot’s girlfriend Kim Sears at the other end.

Mauresmo, who will work alongside Vallverdu, fitness trainers Matt Little and Jez Green and physio Mark Bender, had overseen Murray’s practice session for the first time earlier in the day and the world number five looked at home back on grass following his humbling French Open semi-final thrashing against Rafael Nadal last week.

He recovered from 40-0 down to break in the first game thanks to a series of errors from Mathieu.

There was a brief wobble when Mathieu earned a break point in the fourth game, but the Frenchman squandered the opportunity with a missed forehand into the net and Murray snuffed out the danger to maintain his lead.

Mauresmo was seen occasionally engaging Vallverdu in conversation, but mostly kept her own counsel as she focused on Murray’s performance.

She had plenty to admire, with Murray using his potent combination of power and poise to close out the set.

The Scot, who shrugged off an awkward fall near the baseline, landed the knockout blow with a break for a 4-3 lead in the second set.

He then staved off two break points before clinching the 86-minute win, which drew brief applause from Mauresmo before she quickly left the arena.

Elsewhere in the second round, top seed Stan Wawrinka was on court for only 16 minutes before Marcos Baghdatis withdrew injured.

Cypriot Baghdatis, who was handed a Wimbledon wildcard on Wednesday, retired with Australian Open champion Wawrinka leading 3-2 in the first set.

Lopez’s next opponent will be France’s Kenny De Schepper, a surprise 7-6 (7/3), 7-5 winner over Ernests Gulbis, the sixth seeded Latvian who recently reached the French Open semi-finals.