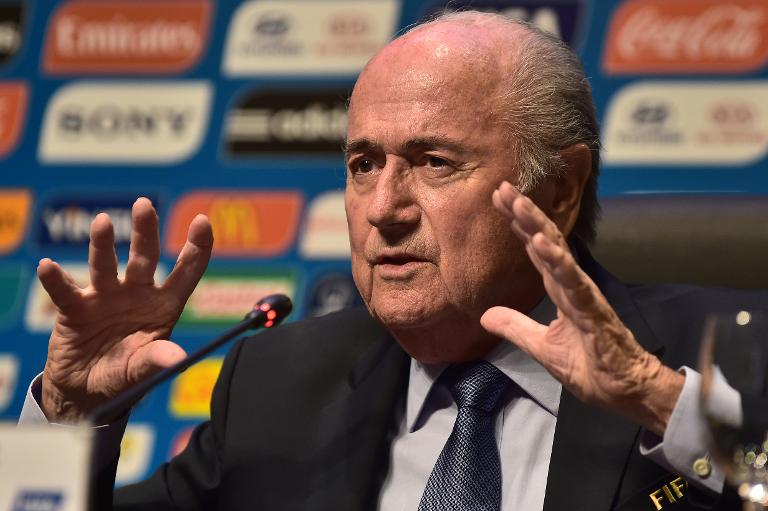 Michael van Praag, head of the Dutch football association, said Blatter should quit when his term ends next year. A similar call was made by David Gill, vice-chairman of England’s Football Association,

Blatter, 78, is expected to use the FIFA Congress in Sao Paulo starting on Tuesday to announce that he will stand for a new four year term.

The corruption allegations and the mounting pressure on Blatter have threatened to further taint the opening of the latest World Cup in Sao Paulo on Thursday. Brazil is already struggling with protests over the cost of the event.

Van Praag challenged Blatter when the FIFA leader appeared before the European confederation UEFA. Some federations are angry because Blatter said in 2011 when he secured his latest term that it would be his last.

‘Mr Blatter, this is nothing personal but if you look at FIFA’s reputation over the last seven or eight years, it is being linked to all kinds of corruption and all kinds of old boys’ networks things,” Van Praag said he had told Blatter. Media were kept out of the meeting.

“FIFA has an executive president and you are not making things easy for yourself and I do not think you are the man for the job any longer.

Blatter replied that he would not resign straight away, according to the official.

The English FA’s Gill also said it was “disappointing” that Blatter had changed his stance and the FIFA should leave next year.

“I think we need a full, frank and open debate about what FIFA needs going forward.”

UEFA president Michel Platini has been touted as a possible rival to Blatter when the FIFA vote is held next year. Platini has said he will only decide his candidacy in September.

Van Praag said that if Platini does not stand then UEFA should agree another candidate to stand against the Swiss official.

Blatter was given a standing ovation when he spoke before the African, Asian and North American-Caribbean confederations on Monday. “This time, before UEFA, he did not get it,” van Praag said.

Blatter, 78, has been FIFA’s president since 1998. The governing body is currently embroiled by accusations that Qatar paid for votes when FIFA chose Qatar to host the 2022 World Cup.

Qatar has strongly denied involvement in wrongdoing, but allegations made in British newspaper The Sunday Times are expected to be raised at the FIFA congress on Tuesday and Wednesday.

FIFA investigator Michael Garcia has completed his report but it will not be handed to a FIFA adjudicatory chamber until mid-July. Blatter has said no decisions will be taken until September or October.

FIFA faces mounting pressure as five of its six major sponsors, who account for hundreds of millions of dollars of finance each year, have called for a thorough investigation of the allegations.

Blatter hit out at the “storm against FIFA” over the 2022 World Cup and the “discrimination and racism” at the heart of the attacks when he addressed the African Football Confederation on Tuesday.

African football officials were among those said to have accepted Qatar’s money, according to the Sunday Times. CAF members gave Blatter a rousing reception and also slammed the allegations in a statement.

But English FA chairman Greg Dyke said he had told Blatter “the allegations being made are nothing to do with the racism, they are allegations about corruption.”

Blatter was equally defiant at the Asian Football Confederation adding that “I still have the fire inside” to lead FIFA.

Qatar beat the United States, Australia, Japan and South Korea to the 2022 tournament, despite a FIFA technical report which warned the searing temperatures during June and July in Qatar posed a health risk.