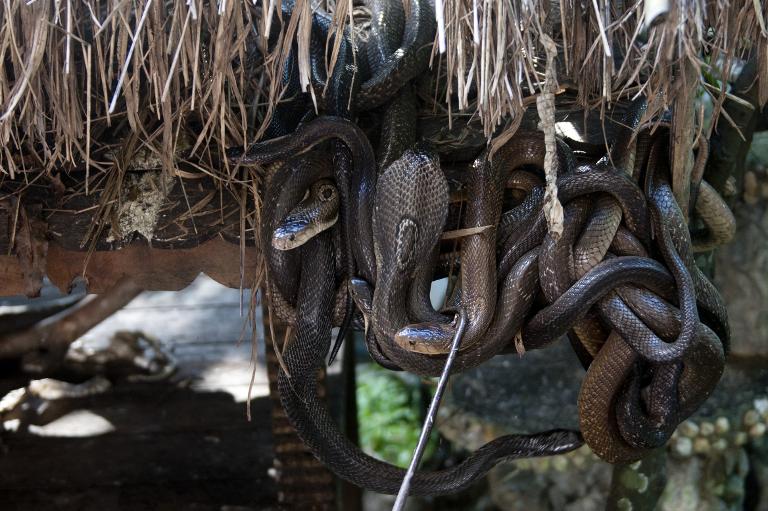 Swaying with the hypnotic rhythm of the king cobra rearing up in front of him, Myanmar snake charmer Sein Tin feels protected from the venomous kiss of his dancing partner by an intricate array of “magical” tattoos.

But in a land slithering with deadly serpents, many of his countrymen are not so lucky.

Myanmar may be best known for the giant constrictor, the Burmese python, but the Southeast Asian nation has a host of other snakes whose names would strike even more fear into the hearts of ophidiophobics.

Russell’s viper, banded krait and spitting cobra are among the 150 species of snakes in the former junta-ruled nation, 40 of them venomous.

Their abundance, combined with a substantial proportion of people working in the countryside and a chronically underfunded health system, means Myanmar has a snake bite mortality rate around twice as high as the world average.

Long a hunter of reptilian predators, Sein Tin has spent decades capturing and taming snakes in Myanmar, and now works at the city zoo in Yangon, the country’s commercial heart.

He no longer remembers how many times he has been bitten, but he does recall the four wounds inflicted by king cobras — one of the deadliest snakes in Asia.

Wiry and weather-beaten, he puts his survival down to the writhing tattoos that coil around his arms and body, several depicting Myanmar’s mythical “naga” sea serpent.

The ink was mixed with snake venom and medicinal herbs and injected into his body.

Most people would last only about an hour if bitten by a snake, Sein Tin said.

“But for me, I have longer to go and get treatment because of the tattoos,” he added before plucking a metre-long cobra from the snake pit and planting a kiss on its silken brow.

While snakes do venture into towns and cities occasionally, it is in the countryside that bites are really a risk.

Slinking through tall grasses, or vanishing camouflaged into the parched earth, snakes are a particular threat to farmers.

And it is not tattoos, but anti-venom they need.

Over 7,800 people were bitten by venomous snakes in 2011 in Myanmar, according to the ministry of health, which said on average more than eight percent do not survive.

That compares with a global average of four percent, based on World Health Organisation figures.

The poison travels quickly through the bloodstream and can lead to blindness, amputations or even death.

Rice farmer Phoe Nge was tending his crops when he suddenly felt a sharp burning sensation in his foot.

“I didn’t feel pain right away. I thought I had been stung by a bee. But when I looked around, it was a viper,” said the 38-year-old, who lives on the distant outskirts of Yangon.

“I am a village man, so I tore my longyi apart and tied it around my foot,” he said, referring to the sarong-like wrapped cloth worn by men and women.

The bandage and his ability to swiftly identify his scaled assailant as the Russell’s viper — the country’s deadliest snake species — meant he was able to receive the correct anti-venom from a nearby clinic.

So what should people do if they are bitten?

“You must not run, because if you run you are going to activate the blood circulation in your legs and the venom will go very fast to the heart and the main system,” said Chantal Bonfils, chief medical officer at the SOS International clinic in Yangon.

Do not try to cauterise the wound, suck out the venom or apply ice either.

And if you cannot recognise the snake, the symptoms should help doctors identify the culprit — blood stops clotting properly in the case of a Russell’s viper bite, whereas cobra venom is neurotoxic causing blurred vision.

Antidotes to snake bites are obtained by injecting a small amount of venom into an animal, generally a horse, and then collecting the antibodies produced.

The country is planning to double its production of antivenom — to 100,000 doses, compared with 53,000 currently, according to the WHO — as it tries to wrestle down mortality rates.

While preventative measures to stop getting bitten — such as wearing shoes while walking through fields — go a long way to reduce bites, once the snake has struck there is only one option.

“The best, and the only treatment if you are bitten by a snake, is to inject the correct antivenom,” said Aung Zaw, deputy manager of a pharmaceutical factory run by the ministry for industry.