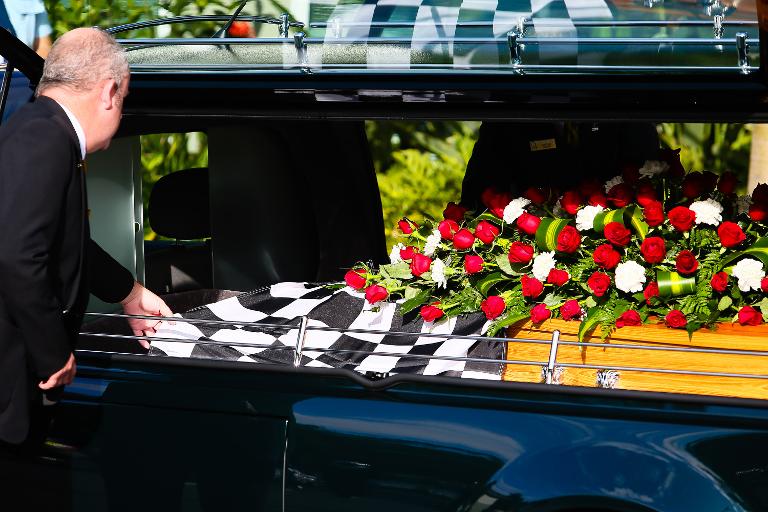 Flags flew at half mast as hundreds of mourners gathered Wednesday to bid farewell to Formula One great Sir Jack Brabham at a state funeral where he was revered as “a national treasure”.

Brabham, who claimed three world drivers’ titles and remains the only man to win the championship in a car he built himself, died last month aged 88 from cancer.

His funeral on Australia’s Gold Coast was delayed because of the racing commitments of his grandsons Sam and Matthew.

“Dad would have got out of his coffin and kicked their arse if they missed a couple of matches for him,” his son Geoffrey explained.

The Australian is acclaimed as one of the sport’s most influential figures with the technological innovations brought about by the team he created helping shape Formula One.

He was the first driver to be knighted for services to motorsport and the Australian Grand Prix winner’s trophy was this week renamed in his honour.

“He was a legend and a giant not only in motor racing but in all Australian sport,” added son Geoffrey, the Australian Broadcasting Corporation reported.

Australian Grand Prix chief executive Andrew Westacott called him a “national treasure” who “just took on the world and won” while in a message Prime Minister Tony Abbott hailed his “have-a-go spirit”.

Brabham was laid to rest in a coffin adorned with a steering wheel, a helmet and draped in a black and white racing flag.

In a statement on Tuesday, his wife Lady Brabham said she had been overwhelmed by the tributes that had poured in from around the globe.

“It has been comforting to hear kind words from the likes of Jean Todt, Sir Stirling Moss, Sir Jackie Stewart to Alan Jones. Jack would have been so very proud,” she said.