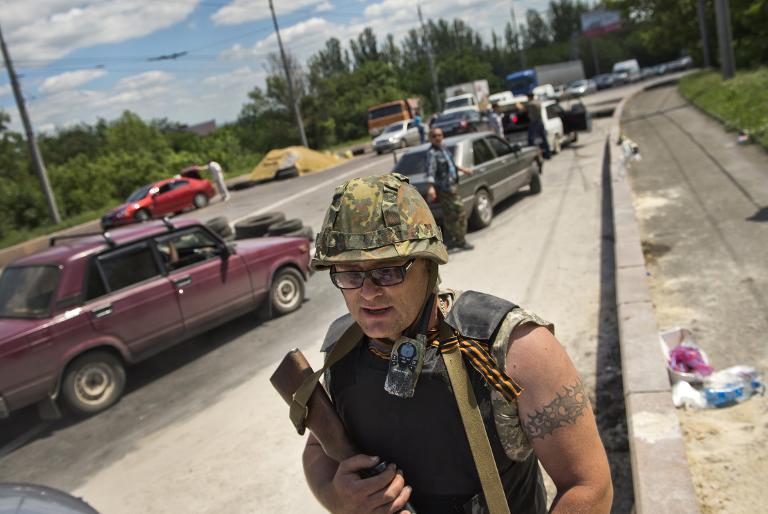 Ukraine’s new Western-backed president Tuesday ordered the creation of humanitarian corridors in the separatist east that could save civilians and advance his plan to end nearly two months of fighting by the end of the week.

Petro Poroshenko’s initiative meets a major demand put forward by Moscow and helps address growing concern among rights groups about Kiev’s use of tanks and air power in heavily populated areas to suppress the pro-Russian insurgency.

But the 48-year-old chocolate baron and political veteran stopped short of accepting the Kremlin’s request to allow Russian aid into the eastern rustbelt — a move Kiev fears could be used to help arm the rebels.

“In order to avoid new victims in the zone of the anti-terrorist operation, the president has ordered the responsible ministers to bring about all necessary conditions for civilians who want to leave,” Poroshenko’s office said in a statement.

Russia said the decision was “welcome” but left room for concern that Poroshenko might only step up his offensive once civilians leave for safer parts of Ukraine.

“Military operations are continuing and even intensifying in a number of cases,” Foreign Minister Sergei Lavrov said after meeting his German and Ukrainian counterparts in Saint Petersburg.

But German Foreign Minister Frank-Walter Steinmeier said he saw “the light at the end of the tunnel” and a “readiness from all sides to act to de-escalate the crisis”.

Poroshenko has unveiled plans to end a rebellion that has killed more than 200 and shaken the very foundation of the splintered ex-Soviet state by the end of his first week in office.

The peace push came after the first of what are meant to be nearly daily meetings with Moscow’s ambassador to Kiev and a representative from the Organisation for Security and Cooperation in Europe.

The high-stakes negotiations include efforts to stave off a Russian gas cut that would also impact Europe and plunge his economically-devastated country into even deeper recession.

A marathon round of EU-mediated gas talks broke up in Brussels early Tuesday for consultations and another session is due to begin at 1900 GMT.

– Justified use of force –

A top leader in the self-proclaimed “Donetsk People’s Republic” said the level of violence made him doubt the sincerity of Poroshenko’s proposals.

“We heard about this initiative but doubt it will come into force,” Donetsk “deputy governor” Andriy Purgin told Russia’s Interfax news agency.

The government campaign — dubbed an “anti-terrorist operation” by Kiev and a “punitive operation” by Moscow — has gathered considerable momentum since Poroshenko’s May 25 election.

The fighting has engulfed two economically-vital regions that are home to seven million people and have extensive trade and cultural ties to Russia.

The battles are now primarily being waged along Ukraine’s border with Russia and Slavyansk — a city of 120,000 that was the first of a dozen to fall under rebel command in early April.

A Ukrainian military source told AFP that government forces had also successfully repelled a second attempt by guerrillas to seize the main airport in the neighbouring region of Lugansk since the weekend.

But rights groups question whether Ukraine’s growing reliance on artillery fire in Slavyansk and neighbouring towns was entirely justified.

“Criminal conduct by the insurgents does not relieve the Ukrainian forces of their obligations to act in accordance with international law,” Human Rights Watch said in a letter to Poroshenko.

The gas talks in Brussels come on the eve of a Russian deadline for Ukraine to cover a debt of $4.5 billion (3.3 billion euros) or have its shipments end Wednesday.

Ukraine has refused to pay the gas bill in protest at Russia’s decision to nearly double its rates in the wake of the February ouster of Kiev’s Kremlin-friendly president after months of pro-EU protests.

About 15 percent of Europe’s gas from Russia transits through Ukraine — dependence that EU nations have been trying to limit ever since suffering similar disruptions in 2006 and 2009.

Analysts had expected the two sides to agree to a new price of around $350 per thousand cubic metres of gas — a sum about halfway between Russia’s old rate and the one set after the rise to power of the new pro-Western authorities.

But Kiev appears to be taking a hardline position by demanding the same price Russia awarded the ousted authorities for their decision to ditch an historic EU partnership.